Sudden cardiac death (SCD) in a young person is a rare but tragic occurrence. The impact is widespread, particularly in the modern era of media coverage and visibility of social media. Hypertrophic cardiomyopathy (HCM) is reported historically as the most common cause of SCD in athletes younger than 35 years of age. A diagnosis of HCM may be challenging in athletes as pathological hypertrophy of the left ventricle may also mimic physiological left ventricular hypertrophy (LVH) in response to exercise. Differentiation of physiological LVH from HCM requires an array of clinical tools that rely on detecting subtle features of disease in a supposedly healthy person who represents the segment of society with the highest functional capacity. Most studies are based on comparisons of clinical tests between healthy unaffected athletes and sedentary individuals with HCM. However, data are emerging that report the clinical features of athletes with HCM. This article focuses on studies that help shed further light to aid the clinical differentiation of physiological LVH from HCM. This distinction is particularly important in a young person: a diagnosis of HCM has significant ramifications on participation in competitive sport, yet an erroneous diagnosis of physiological adaptation in a young athlete with HCM may subject them to an increased risk of SCD.

Athletes who perform regular and intensive exercise regimes develop a variety of electrical and structural cardiac adaptations that manifest functionally to improve stroke volume and performance. Up to one-fifth of young athletes (aged between 14–35 years) reveal greater left ventricular (LV) wall thickness compared to sedentary controls, though the majority fall under 12 mm.1,2 A small proportion of athletes, however, reveal an LV wall thickness of 13–16 mm, which overlaps with morphologically mild hypertrophic cardiomyopathy (HCM).

Hypertrophic cardiomyopathy is traditionally viewed as the most common condition responsible for sudden cardiac death (SCD) in young athletes.2–4 In a large case series of SCD in 1,866 young athletes, HCM was the causative condition identified in nearly 40 % of cases.4 Nearly two-thirds of athletes were 17 years old or younger and still at high school. Studies have also revealed a strong male preponderance for SCD, particularly in African American athletes who compete in sports with sudden movements and adrenergic surges such as football or basketball.5 Unfortunately over 80 % of affected individuals are asymptomatic before SCD, which often occurs during exercise or in its aftermath.

The incidence of SCD in young athletes (<35 years of age) varies widely according to the population studied. US data suggest an incidence ranging from anywhere between 0.5 and 13 per 100,0006,7 yet current methods of data collection have also been highlighted as underestimating the true incidence of SCD.8

Most studies have focused on HCM in sedentary individuals while few have focused on athletes. One study of over 3,000 British elite athletes revealed an HCM prevalence of 1:1500 with only morphologically mild expressions of the disease.3 The Italian screening experience also reports a similar prevalence among over 33,000 young athletes. This supports the theory that more severely affected individuals are likely to have been selected out due to impaired cardiorespiratory capacity.9

A small proportion (2 %) of athletes who are white, male and compete in endurance sports have been reported to demonstrate LVH between 13 and 15 mm, which can also mimic morphologically mild HCM.2,3 Further studies revealed that ethnicity affects the degree of LVH, with up to 18 % of African American adult athletes exhibiting an LV wall thickness of >12 mm but never beyond 16 mm.10 The ‘grey zone’ is therefore larger in African American athletes.

Hypertrophic cardiomyopathy is characterised by asymmetric septal hypertrophy with a maximum LV wall thickness ≥15 mm in adults or >9 Z score (>2 Z score in adolescents and children).11 There is usually concomitant hyperdynamic systolic function, a relatively small LV cavity size and reduced diastolic function.12 Dynamic LV outflow tract obstruction (LVOTO) can be caused by systolic anterior motion of the mitral valve in up to one-third of patients. LVOTO can be present during exercise in up to 70 % of patients with HCM.13

Rather than relying on conventional methods to differentiate physiological LVH from HCM,14,15 recent studies have focused on direct comparisons between athletes with HCM and those with physiological LVH16,17 to provide a better understanding of the clinical features of HCM in an athlete (Figure 1). A wide array of clinical tools are available to create diagnostic algorithms to facilitate such differentiation,18 including clinical symptoms and family history, ECG, echocardiography and cardiac MRI (CMR), exercise stress testing and genetic testing.

Abnormal T wave inversion (TWI) is the hallmark of HCM and observed in over three-quarters of athletes with the condition according to a recent study.19 In another recent study TWI was more common among 106 athletes with HCM compared to 101 sedentary individuals with HCM (96 % versus 84 %, p=0.003)16 with the lateral leads most frequently involved. ST segment depression was observed in over half of athletes with HCM and one-quarter demonstrated pathological Q waves. Additionally, in a subgroup of 55 healthy athletes with physiological LVH, abnormal TWI, ST segment depression or pathological Q waves were absent in everyone.

A symmetrical increase in LV wall thickness in a homogenous pattern is seen in athletes with physiological LVH. Conversely in HCM, irregular patterns of hypertrophy occur that are localised to the septum or apex in an asymmetrical manner. Athletes with HCM exhibit less LVH than sedentary individuals with HCM (15.8 mm versus 19.7 mm, p<0.001) with a third demonstrating hypertrophy confined to the LV apex.16 The traditional ‘grey zone’ would only include 14 % of athletes with HCM who demonstrated mild concentric LVH that could also be interpreted as physiological LVH.

Left ventricular cavity enlargement is also observed in most athletes with physiological LVH, which is a response to an increased cardiac workload associated with exercise, as opposed to sedentary patients with HCM where the LV dilatation indicates end-stage disease and reduced functional capacity. The LV end-diastolic dimension in healthy athletes ranges between 55 and 70 mm20 as opposed to those with HCM who generally have an LV cavity dimension of <50mm. A recent study of 28 healthy athletes and 25 patients with HCM reported that a cut-off of 54 mm for LV cavity size had a sensitivity and specificity of 100% to help distinguish physiological LV hypertrophy from HCM.21 In athletes with HCM, however, 14 % of athletes with HCM revealed an LV cavity >54 mm with an upper limit of 60 mm.16

Systolic anterior motion (SAM) of the mitral valve against the inter-ventricular septum causing dynamic LVOTO is present in approximately 25 % of sedentary HCM individuals and up to 70 % of cases during exercise.13 Athletes with HCM do not usually reveal baseline or dynamic LVOTO.

Myofibre disarray in HCM, coupled with impaired sarcoplasmic calcium kinetics leads to reduced myocardial relaxation and diastolic dysfunction. Most athletes with HCM, however, demonstrate normal diastolic function according to conventional parameters.17 Using E prime 9 cm/s as a cut-off for pathology according to British Society of Echocardiogram guidelines22 revealed a sensitivity of only 35 % among 56 athletes, 37 of whom were diagnosed with HCM, with the remaining 19 athletes having physiological LVH. The sensitivity fell further to 14 % when using an E/E prime ratio >12 as a marker of pathology. The highest sensitivity for identifying HCM in the athlete was found using longitudinal function as a discriminating marker (S prime <9 cm/s) albeit at 43 % with a specificity of 84 %. Assessment of global longitudinal strain (GLS) has also been shown to be useful with a measurement of more (negative) than −10 % resulting in a sensitivity of 87 % and specificity of 95 % for the diagnosis of HCM in a sedentary patient.23 A GLS of more than −15% in an athlete is deemed pathological. 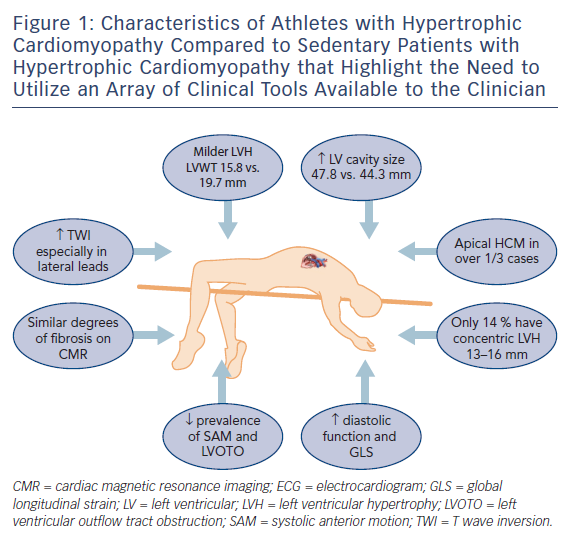 Cardiac MRI is the gold standard imaging tool for assessment of HCM in athletes and non-athletes. The ability to delineate LV hypertrophy, reveal underlying fibrosis or utilize more novel techniques such as T1 mapping give CMR a unique position in the armamentarium of imaging modalities. When comparing athletes with HCM to sedentary affected individuals, there is no discernible difference in the presence of myocardial fibrosis (33 % versus 40.6 %, p=0.258).16 Athletes with HCM, however, could have a lower ischaemic burden in the absence of mechanical LVOTO, severe LVH and microcirculatory disease.

T1 mapping and extracellular volume (ECV) content measurement may help differentiate physiological LVH from mild HCM on CMR. Patients with HCM reveal high T1 signals and increased ECV due to inflammation and fibrosis in the extra-cellular space. In contrast, physiological LVH results from an increase in myocyte size and relative reduction in the ECV. A study of 30 endurance athletes and 15 sedentary patients revealed that the ECV component of LV mass was similar between athletes and controls, yet athletes showed a significantly higher indexed cellular mass compared with controls.24 Furthermore, there was an inverse relationship between athletes demonstrating the highest functional capacity (peak oxygen consumption, VO2 max >60 mls/min per kg) and ECV on CMR using T1 mapping. Another study from the same group investigated 16 patients with HCM and 10 athletes with physiological LVH. An ECV >22.5% differentiated physiological LVH from HCM with a sensitivity of 100 % and specificity of 90 %.24

An attenuation of or drop in blood pressure response during exercise is noted in nearly one-quarter of patients with HCM. Plausible mechanisms are abnormal vascular tone, small vessel ischaemia or exertional LVOTO.25 ECG markers of pathology may also be noted during exercise and include ST segment depression, TWI or ventricular arrhythmias. Athletes with physiological LVH, particularly those participating in endurance sports, demonstrate the greatest LV cavity size causing enhanced diastolic filling and subsequent generation of large stroke volume. A VO2 max of >50 ml/kg per min, or >120 % of age-predicted value has traditionally been used to differentiate physiological LVH from HCM.26 However, there are certain limitations regarding the widespread applicability of this value given that the cut-off was based primarily on white male athletes. VO2 max variations are lacking for both African American athletes who are competing in increasing numbers at every level of sport internationally and also athletes with HCM.

The cessation of exercise for 6 to 8 weeks has been shown to reverse some of the structural and electrical changes associated with exercise, including normalization of TWI on the resting ECG and regression of physiological LVH.27 In contrast, an athlete with HCM will continue to demonstrate a pathological phenotype irrespective of whether they have undertaken a period of detraining or not.28

Management of Athletes with Hypertrophic Cardiomyopathy

The overarching aim of managing athletes with HCM is to mitigate their risk of developing potential sequelae of the condition, including SCD. Coupled with the heterogeneous clinical course of the condition making such sequelae difficult to predict, any form of exercise prescription therefore errs on the side of caution. Both the American (AHA/ACC) and European (ESC) recommendations prohibit competitive sports with medium to high dynamic/static components.29,30 This encompasses many mainstream sports with competitive participation limited to low dynamic and low static sports such as bowling and golf.

Evolution in the field of molecular genetics has led to an increasing number of asymptomatic individuals detected through familial screening. Many do not, however, reveal any phenotypic features of HCM and in such genotype positive/phenotype negative individuals, the exercise recommendations vary between the USA and Europe. ESC recommendations adopt a more conservative attitude on the grounds that a genetic predisposition may promote arrhythmogenesis even in the absence of LVH. This approach has been supported by imaging studies that have demonstrated mild impairment of myocardial relaxation and an increase, albeit modest, in the extracellular cardiac matrix in genotype positive/phenotype negative patients.31,32 Conversely, US studies in adolescents who were genotype positive/phenotype negative have revealed a low penetrance of disease over a 12-year follow-up period with only 2 of 36 (6 %) patients affected.33 As such, the USA permits participation in all sports for these individuals, including those with high dynamic and high static components, though it advocates regular surveillance.

Hypertrophic cardiomyopathy reduces the functional capacity of an affected person, leading to a physical inability to participate in high-intensity sports. Impaired diastolic function, small LV cavity size, dynamic left ventricular outflow tract obstruction and microcirculatory coronary disease leading to a reduction in subendocardial flow can all cause failure to augment stroke volume during exercise and low peak oxygen consumption. Differentiating physiological LVH from morphologically mild HCM in the athlete is particularly challenging with an array of clinical tools used to aid the clinician to make the correct diagnosis.