Background: Although antidepressant therapy has been related to increased cardiovascular risk, depression, and its adverse effects on prognosis, is a well-recognised entity among acute coronary syndrome (ACS) patients. The aim of the study was to evaluate prevalence and outcome of antidepressant treatment in a real-world cohort of ACS patients.

Methods: We sought to assess the prevalence of established antidepressant therapy (ADT) and its impact among 2,168 all-comers patients admitted to four Swiss university hospitals for ACS and enrolled in the prospective multicentre SPUM registry (NCT01000701). The primary endpoint was all-cause mortality. The association between ADT and mortality was tested by adjusted multivariable conditional logistic regression.

Conclusion: Among a real-world cohort of ACS patients, ADT is associated with a significantly increased rate of all-cause mortality and non-CV death. These observations should lead clinicians to further individualise ADT, employing newer and safer ADT, generally associated with a lower CV risk. 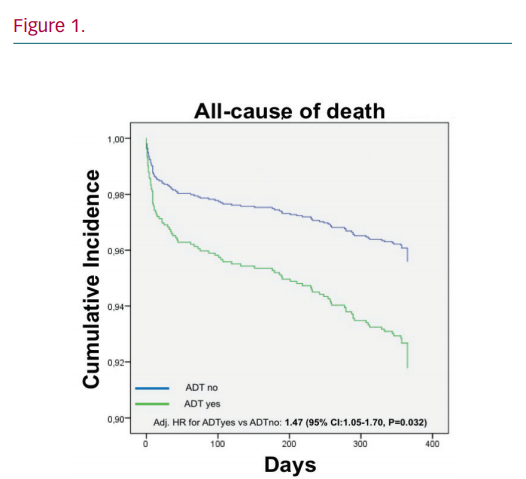 View all link
View All Articles