Takotsubo/stress cardiomyopathy (TC) or apical ballooning syndrome is an increasingly recognised entity around the world. It is an acute reversible cardiac syndrome that has a striking female predominance, with approximately 90 % of cases occurring in women, the vast majority of whom are post-menopausal. Chest pain and dysponea are the most common presenting symptoms. The symptoms and signs are similar to those in other acute cardiac conditions characterised by acute myocardial ischemia or heart failure. A characteristic feature of the syndrome is its relationship to emotional or physical stressful triggers. The process of diagnosing TC is, to a large extent, one of exclusion of other conditions that it mimics. The Mayo Clinic diagnostic criteria are the most widely used. Since acute coronary syndrome is often suspected before the diagnosis of TC is made, initial treatment is often similar to that for an acute myocardial infarction. However, after the diagnosis of TC is confirmed, treatment is supportive with monitoring and treatment of complications. The vast majority of patients with TC have good prognosis with complete resolution of systolic dysfunction.

Takotsubo cardiomyopathy (TC) or syndrome was first described more than 2 decades ago by Dote and colleagues in Japan, but has since been increasingly recognised around the world.1 Takotsubo is the Japanese name for a the traditional octopus trapping pot that has a round bottom and narrow neck, resembling the appearance the left ventricle during the acute presentation (see Figure 1).2 Although, as early as the 1980s, sporadic cases from Europe had described the association between acute stress causing a transient regional wall motion abnormalities of the left ventricle,3 it was Desmet and colleagues who first reported a case series of TC in Europe.4 Twelve of 13 of their patients were women with a mean age of 62 years. A triggering factor was documented in nine cases. All patients had extensive apical akinesia and hence the term apical ballooning was used in their paper.

Apical ballooning syndrome is an alternative name for TC that was also coined in Japan by Tsuchihashi and colleagues who published their seminal case series of 88 patients in 2001, identified from a registry of patients with coronary artery disease.5 Alternative nomenclature for TC includes stress cardiomyopathy, and the one favoured in the lay press is Broken Heart Syndrome. TC is the terminology used in a position statement from the European Society of Cardiology in which it is listed as an unclassified cardiomyopathy.6

The pathogenesis of TC is not well established, and many aspects of the condition, such as the predisposition in post-menopausal women and the characteristic pattern of regional wall motion abnormality, remain unexplained.7,8 Leading hypotheses include catecholamine excess and microvascular dysfunction (see Figure 2). Less likely explanations include coronary spasm, dynamic mid-cavity or left ventricular outflow tract obstruction and plaque rupture with spontaneous thrombolysis. The catecholamine hypothesis is supported by the observations that: i) plasma catecholamines levels are elevated in some patients;9 ii) pheochromocytoma associated and neurogenic cardiomyopathies produce a similar transient regional wall motion abnormality of the left ventricle in the setting of high catecholamine activity; iii) an immobilisation-induced stress rat model has been shown to elevate catecholamine levels and produce reversible ventricular ballooning; and iv) in a mouse model high levels of epinephrine has been shown to be negatively inotropic. The vascular hypothesis is supported by the frequent detection of impaired coronary microcirculatory function as well as the occasional finding of multi-vessel coronary spasm.

TC is an acute reversible cardiac syndrome that has a striking female predominance, with approximately 90 % of cases occurring in women, the vast majority of whom are post-menopausal. Due to their advanced age, affected patients often have cardiovascular comorbidities and approximately 10 % have incidental coronary artery disease.10 An estimate for its incidence, outside of Japan, comes from the Nationwide Inpatient Sample database in the US, which represents a random sample of all admissions from 20 % of community hospitals. In 2008, there were 6,837 patients diagnosed with TC among 33,506,402 hospitalisations, amounting to a rate of 0.02 %.11 It is estimated that the syndrome accounts for approximately 2 % of patients initially suspected of an acute coronary syndrome.12

Chest pain and dyspnoea are the most common presenting symptoms. The symptoms and signs are similar to those in other acute cardiac conditions characterised by acute myocardial ischaemia or heart failure. A characteristic feature of the syndrome is its relationship to emotional or physical stressful triggers. Emotional stressors range from a discrete event resulting in anger, frustration, grief or loss; to ongoing stressful situations such as moving to a new home, involvement in legal proceedings or challenging interpersonal relationships at home or at work. Physical stressors typically involve exacerbation of obstructive airways disease, major surgery, orthopaedic trauma, neurological catastrophes and other critical illnesses. TC closely resembles the entity previously known as neurological stunned myocardium, which is now believed to be the same condition.13 Of note, approximately one- third of cases occur without an identifiable stressor.

The process of diagnosing TC is, to a large extent, one of exclusion of other conditions that it mimics (e.g. acute coronary syndrome and myocarditis). This is based on the clinical presentation, and findings from the electrocardiogram (ECG), biomarkers and cardiac imaging: 30–50 % of cases present with ST-segment elevation and one-third with deep T-wave inversion. Deep T-wave inversion and QT prolongation may be seen at presentation or develop in the days following admission. Using contemporary troponin assays, a modest elevation in troponin is universally detected. Routine measurement of catecholamine levels has not been shown to be helpful. Catecholamines may be measured in select cases where there is no clear trigger for TC to screen for a pheochromocytoma, especially if hypertension is present. Neither the troponin profile nor the ECG is helpful in differentiating TC from and acute myocardial infarction (MI).

Left ventriculography, echocardiography and magnetic resonance imaging demonstrate the typical wall motion abnormalities of TC (see Figure 1). The imaging modality used depends on the clinical setting, availability and local expertise. Left ventriculography is typically performed, and is very helpful, in cases where an acute coronary syndrome is initially suspected, but angiography demonstrates normal or mildly diseased arteries. Cardiac magnetic resonance imaging is useful in excluding myocarditis and infarction, especially in cases where there is diagnostic uncertainty. Transient proximal or mid-segment occlusion of a large left anterior descending artery may produce a regional wall motion abnormality pattern that mimics TC. Thus, it is essential to carefully evaluate for regional wall motion abnormality in the distribution of all three major epicardial coronary arteries in order to distinguish the classic form of TC from a left anterior descending artery territory infarct or stunning. In these cases, the presence of true lateral wall systolic dysfunction is useful in differentiating features between TC and anterior MI. Other variant patterns of regional wall motion abnormalities of TC have been described, and while less common, tend to be pathognomonic. These include the mid-ventricular variant where apical function is preserved, or inverted/reverse TC, where the apical (and often the mid) segments are preserved with akinesis/hypokinesis of the basal regions.

Coronary angiography is indicated whenever TC is suspected in order to exclude obstructive multi-vessel coronary artery disease. Computed tomography (CT) angiography may be appropriate in cases where cardiac catheterisation is not safe or feasible.

The Mayo Clinic diagnostic criteria are the most widely used and require all four of the following:14 i) presence of transient regional wall motion abnormality of the left (and often right) ventricular mid- segments with or without apical involvement. The regional wall motion abnormalities extend beyond a single epicardial vascular distribution. (Follow-up imaging is required to demonstrate that the ventricular dysfunction was transient); ii) absence of obstructive coronary disease or angiographic evidence of acute plaque rupture (TC may occasionally occur in patients with obstructive coronary atherosclerosis); iii) new electrocardiographic abnormalities (either ST-segment elevation and/ or T-wave inversion) or modest elevation in cardiac troponin; iv) exclusion of myocarditis and pheochromocytoma. 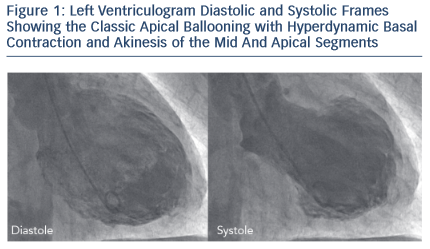 Since acute coronary syndrome is often suspected before the diagnoses of TC is made, initial treatment is often similar to that for an acute MI. However, after the diagnosis of TC is confirmed, treatment is supportive with monitoring and treatment of complications,such as acute heart failure, left ventricular outflow tract obstruction, mitral regurgitation, hypotension, arrhythmias and thromboembolism. There are no randomised trial data to direct therapy. Initiation of beta-blocker therapy is recommended given the potential pathophysiological role of catecholamines, and the treatment is continued long term with the goal of preventing recurrence. However, it is worth noting that retrospective studies have shown that TC can occur in patients who are prescribed beta-blockers raising doubt over their efficacy in this condition.15 Treatment with a renin-angiotensin system antagonist should also be considered until there is spontaneous recovery of left ventricular function, which typically occurs over 4–6 weeks. If coincidental coronary artery disease is detected, secondary prevention measures should be initiated. Screening for acute or chronic emotional stress and psychiatric disorders is important and interventions may be reasonable in some cases.

The vast majority of patients with TC have good prognosis with complete resolution of systolic dysfunction. In-hospital mortality from early studies was estimated at approximately 2 %.16 Higher in-hospital mortality of 4.2 % has recently been reported from the National Inpatient Sample database in the US.17 In a meta-analysis of 37 case series with a total of 2,120 patients from 11 countries, the in-hospital mortality rate was 4.5 %. Thirty-eight percent of deaths were directly related to TC complications, but the rest were due to underlying non-cardiac conditions.18 This highlights the fact that acute morbidity related to complications such as pulmonary oedema, cardiogenic shock and arrhythmias can be significant.Among those who have complete recovery, long-term survival appears to be similar to the age- and gender-matched population.16 In another study, there was increased mortality in TC patients compared with age- and gender- matched controls in the first year after the index event, but all the deaths in this case series were non-cardiac, mostly due to cancer.15 In one of the longest follow-ups available to date of patients with TC, recurrence of the condition was observed in approximately 10 % of patients over a mean follow-up duration of 4 years.16