The recently published International Study of Comparative Health Effectiveness with Medical and Invasive Approaches (ISCHEMIA) trial has shed further light on the importance of pharmacotherapy in the management of stable coronary artery disease (CAD).1

In brief, the ISCHEMIA trial was designed to study the impact of an initial invasive strategy (cardiac catheterisation and revascularisation with percutaneous coronary intervention [PCI] or coronary artery bypass grafting [CABG] where feasible) compared with initial medical therapy in patients with stable CAD and moderate or severe ischaemia. Patients with frequent angina (all class IV and most class III), left main (LM) stenosis ≥50% or left ventricular ejection fraction (LVEF) <35% or heart failure were excluded. A total of 5,179 randomised patients were followed up for a median of 3.2 years.

Approximately 80% of patients in the invasive strategy arm underwent revascularisation (with about three-quarters of these having PCI and one-quarter having CABG) and approximately 15% in the medical therapy arm underwent revascularisation before the occurrence of a primary outcome event. At 4 years, the cumulative rate of major adverse cardiovascular event (MACE) – the composite of cardiovascular death, MI or hospitalisation for unstable angina, heart failure or resuscitated cardiac arrest – was similar, at 13.3% in the invasive group and 15.5% in the medical therapy group. Although the mortality rate was low in both randomised groups (6.5% versus 6.4% at 4 years), the invasive group had fewer late non-procedural MIs at the cost of an increase in procedural MIs. Of note, the relative outcomes of the primary endpoint were similar between the two treatment arms in patients with and without high-risk characteristics, such as multivessel disease, severe ischaemia, diabetes or proximal left anterior descending artery (LAD) stenosis.

To appreciate the gap that the ISCHEMIA trial addresses in the treatment of stable CAD, it is important to briefly contextualise the evolution of the impact of medical therapy (Table 1). The therapeutic importance of medical therapy in stable CAD has been well-established since the mid-20th century. One of the first major randomised controlled trials (RCTs), CASS, performed in the 1970s, compared CABG versus medical therapy in patients with CAD. Patients with LM stenosis ≥70% or LVEF <35% were excluded, similar to the ISCHEMIA trial.2 At 5-year follow-up, there was no significant difference in the annualised mortality rate between the CABG and the medical therapy group (1.1% versus 1.6%), regardless of single, double or triple vessel disease. The annual rate of CABG in the medical therapy group was 4.7%. With longer follow-up to 10 years, a survival advantage with CABG was observed in patients with LVEF <50% and either proximal LAD disease or triple vessel disease.3 In that era, medical therapy was suboptimal compared with contemporary standards, with relatively low use of antiplatelet agents (56–69%), lipid-lowering drugs (31–36%), beta-blockers (43–44%), nitrates (45–47%), and other antihypertensives (17–21%).2,3

With advances in both medical therapy and PCI techniques at the turn of the 21st century, the pivotal COURAGE trial was conducted to determine if routine PCI in addition to optimal medical therapy provided additional benefit compared with optimal medical therapy alone in patients with stable symptomatic CAD (again, patients with LM stenosis ≥50% or LVEF <30% were excluded).4 In that RCT, a total of 2,287 patients were followed for a median of 4.6 years (up to 7 years). The event rate of all-cause death or non-fatal MI at the end of the follow-up period was similar between study arms, at 19.0% in the PCI group and 18.5% in the medical therapy group (p=0.62).

Although there were no significant differences in the individual components of mortality, MI and stroke, the medical therapy group had a greater incidence of unplanned revascularisation during follow up. However, bare metal stents were used in most patients, and the optimisation of pharmacotherapy in that trial was notable. At 1 year in the medical therapy group (similar rates in the PCI group), aspirin was used in 95% of patients, statins (predominantly simvastatin) in 95%, angiotensin-converting enzyme inhibitors (ACEIs) or angiotensin II receptor blocker (ARB) in 72% and β-blockers in 89%. This was reflected in the average systolic blood pressure (SBP) of 124 mmHg, diastolic blood pressure of 70 mmHg and LDL of 2.1 mmol/l achieved at the end of 1 year. In a subset of 1,211 patients (53% of original population) followed for up to 15 years (median 6.2 years), survival remained similar in both groups.5 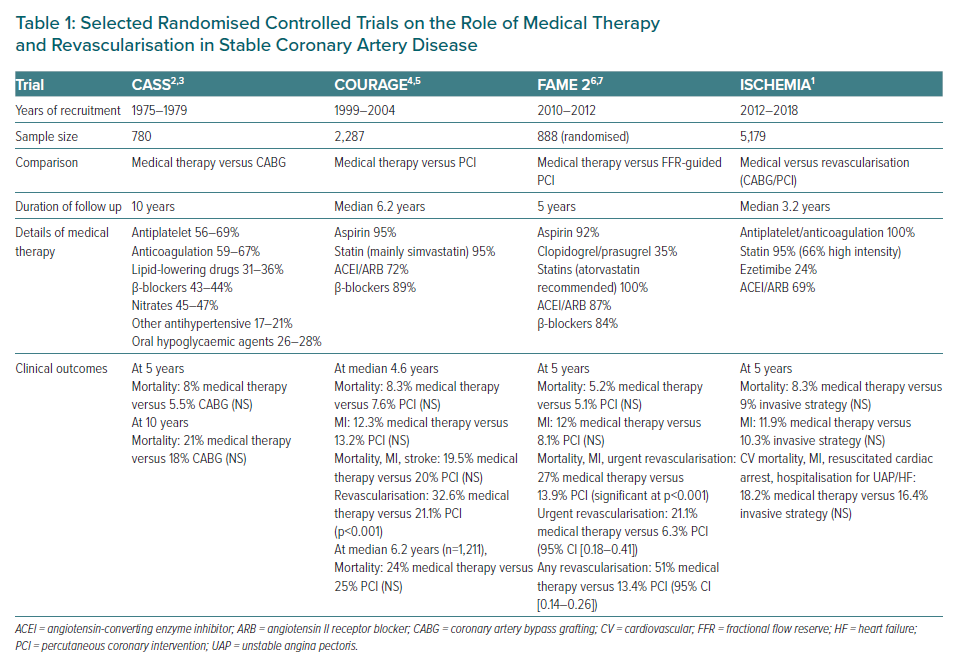 Nearly a decade later, the randomised (FAME 2 study was conducted to compare medical therapy versus PCI in patients with stable CAD with a functionally significant stenosis, defined as fractional flow reserve (FFR) ≤0.80.6 FFR is a pressure wire-based index obtained during coronary angiography that examines the haemodynamic significance of an anatomic coronary stenosis. Of the 888 patients, PCI resulted in a lower primary event rate of death, MI, or urgent revascularisation at 2 years (12.7% versus 4.3%, p<0.001), driven predominantly by a lower rate of urgent revascularisation. There were no differences in the individual components of death or MI. Results were similar at 5 years, although PCI was associated with fewer non-procedural MIs at the cost of greater procedural MIs (as seen in ISCHEMIA).7 Of note, drug-eluting stents were utilised in 97% of cases. At 1 year, the optimisation of medical therapy in the medical therapy group was similar to the COURAGE trial with aspirin used in 92% of patients, clopidogrel or prasugrel in 35%, statins (atorvastatin recommended) in 100%, ACEI/ARB in 87% and β-blockers in 84%.

In the ISCHEMIA trial, the goals of optimal medical therapy are summarised in Figure 1.1 These objectives were selected based on guidelines and a wealth of evidence; these include SBP <130 mmHg, LDL <1.8 mmol/l and HbA1c <8% (<7% if possible). This was achieved through a holistic approach involving both pharmacotherapy and behavioural modifications, including smoking cessation, physical activity and diet. In the setting of this large-scale, international RCT, these goals were achieved in many, but not all, patients, with a median SBP of 129 mmHg, LDL of 1.7 mmol/l and HbA1c of 6.3% for the overall cohort (similar for both invasive and medical therapy groups). The prescription of recommended medications was similarly high, with 100% of patients on antiplatelet or anticoagulation therapy, 95% on statins (66% on high-intensity statins), 24% on ezetimibe and 69% on an ACEI/ARB.

These observations demonstrate that the leaderships of most contemporary randomised trials of revascularisation versus medical therapy in CAD have strongly focused on foundational medical therapies to prevent long-term ischaemic events, as opposed to merely managing angina symptoms. In the management of stable CAD, a multi-pronged pharmacotherapy approach is favoured (coupled with risk factor control and lifestyle modifications, which are beyond the scope of the current review). Long-term anti-thrombotic therapy with a single antiplatelet therapy remains the backbone of treatment of stable CAD without PCI. The utility of more potent antiplatelet or anti-thrombin agents for the treatment of stable CAD without PCI remains controversial. The addition of low-dose rivaroxaban to aspirin in patients with stable CAD in the large-scale randomised COMPASS trial showed a reduction in MACE but at the expense of increased bleeding.8 The benefits were particularly evident in those with peripheral vascular disease.

The THEMIS study randomised patients with diabetes and stable CAD to aspirin with ticagrelor versus aspirin alone. In that study, aspirin with ticagrelor resulted in a lower incidence of ischaemic events at the expense of increased bleeding.9 A net clinical benefit was noted primarily in the subset of patients with prior PCI and not in those without prior stenting.10 The role of ticagrelor monotherapy in stable CAD without PCI is not well-studied.

As regards lipid-lowering therapy, the introduction of high-intensity statins at the turn of the 21st century, followed by other LDL-lowering adjuncts, such as ezetimibe and the proprotein convertase subtilisin/kexin type 9 (PCSK-9) inhibitors, have improved outcomes in the treatment of patients with CAD. Backed by strong evidence from numerous RCTs, the 2018 American Heart Association/American College of Cardiology lipid guidelines recommend a high-intensity statin (atorvastatin or rosuvastatin). If LDL remains ≥1.8 mmol/l despite maximally tolerated statins, the addition of newer therapies such as ezetimibe or PCSK-9 inhibitors to achieve target is endorsed.11 These therapies were all utilised in the ISCHEMIA trial (although few patients received PCSK-9 inhibitors). The evidence for non-LDL reduction therapies remains limited. However, the REDUCE-IT using high-dose icosapent ethyl showed a significant reduction in MACE outcomes in patients with cardiovascular disease (CVD) and raised triglyceride levels despite statin therapy.12

Achieving optimal blood pressure is also crucial. The SPRINT trial showed that targeting SBP <120 mmHg (target achieved 121 mmHg) versus SBP <140 mmHg (target achieved 136 mmHg) in patients without diabetes at high risk for cardiovascular events reduced mortality and MACE (although with greater complications such as hypotension, syncope, electrolyte abnormalities and acute renal failure, mandating close follow-up).13 After the publication of SPRINT the target SBP in the ISCHEMIA trial was lowered from 140 mmHg to 130 mmHg during the trial, with a median SBP of 129 mmHg achieved.1 In the higher risk subset of patients with diabetes and stable CAD, the advent of newer oral hypoglycaemic agents has ushered in a new era in glucose control. Numerous RCTs on sodium-glucose co-transporter-2 inhibitors have shown significant reductions in MACE rates in people with diabates and known CVD.14,15

Goals of Medical Therapy in the ISCHEMIA Trial 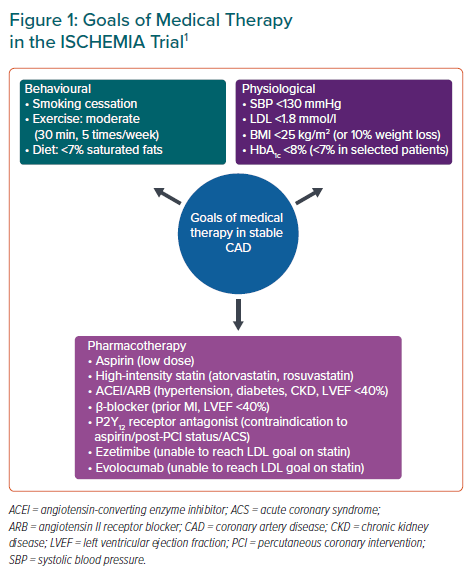 While debate may exist on the role of routine revascularisation in the treatment of stable CAD without heart failure or LM disease, PCI and CABG provide symptom control and improved quality of life for patients in whom anti-angina agents either fail to control symptoms or result in unacceptable side-effects. Nevertheless, the importance of intensive (non-anginal) medical therapy as the foundation for treatment of these patients is undisputed, regardless of initial strategy chosen, given the persistent need to prevent atherosclerosis progression and recurrent acute coronary events. Practically, limitations exist in real life. The prescription of goal-directed medical therapy by medical practitioners in a busy clinic setting and patient adherence to multiple medications in a non-trial setting are often suboptimal. Even within the confines of an RCT, the ISCHEMIA trial had an adherence to medication of only approximately 82%, and only approximately 40% of patients achieved the four established goals of LDL <1.8 mmol/l and on statin, SBP <140 mmHg, aspirin use and smoking cessation.1 Ongoing efforts to improve education and modify clinical protocols targeted towards both physicians and patients are essential to improve clinical outcomes through the optimisation of foundational medication prescription and adherence.