Catheter ablation is a well-known treatment for patients with AF. Despite the growing knowledge in the field, the identification of predictors of recurrence of AF after catheter ablation is one of the primary goals and is of major importance to improve long-term results of the procedure. The aim of this article is to provide an overview of what has been published in recent years and to summarise the major predictors, helping cardiac electrophysiologists in the selection of the right candidates for catheter ablation.

AF is the most common sustained arrhythmia in clinical routine, and is associated with cardiovascular and cerebrovascular complications, dementia and mortality.1 Pulmonary vein isolation (PVI) in patients with symptomatic AF has become a well-established treatment option.2,3 High acute success rates are achievable, but durable efficacy of previously successful PVIs for AF still remains a challenge, and finding the predictors of AF recurrence is of major importance. Success rates vary between 60% and 80%, for paroxysmal AF (PAF), depending on ablation strategies, and between 50% and 60% for persistent AF.4,5

AF as a condition includes different clinical subtypes, and the success rate of catheter ablation (CA) of AF is hugely affected by patient characteristics. The identification of the predictors of maintenance of sinus rhythm after CA is of major importance, as it would help in patient selection. In our article, we examine the published data regarding the possible predictors of recurrence after radiofrequency PVI.

Early recurrence (ER) is defined as a recurrence of AF within 3 months of ablation, and ER after CA of AF is fairly common; a study conducted by Joshi et al. showed that the incidence of ER is most frequent soon after the procedure, while it decreases in the following days.7 The patients were monitored with a loop recorder for the first 3 months after the procedure. Although the prevalence of ER was significant, with almost two-thirds of the patients having ER, it has been widely recognised that a good proportion of patients experiencing ER are free of significant atrial arrhythmias at prolonged observation. In contrast, the occurrence of late recurrence is more frequent in patients with ER.8 Moreover, another study by Bertaglia et al. found 46% of atrial tachyarrhythmias relapse during the first 3 months of follow-up.9 These data suggest that ER is probably linked to the ablation procedure itself. The thermal energy delivery, the local inflammation, and a transient imbalance between sympathetic and parasympathetic tone has been reported after ablation, and may potentially contribute to arrhythmic recurrences in this phase.10–12 A possible incomplete lesion in the atrium in the first days after the procedure and the lack of a complete scar across the wall are another possible cause for early recurrence.13,14 Another possible explanation for the uncertain clinical impact of ER is the occurrence of atrial reverse structural and electrical remodelling after ablation; indeed, maintenance of sinus rhythm positively affects conduction velocities and effective refractory periods of the atria, which renders the atria less susceptible to initiation and perpetuation of arrhythmias.14

Late recurrence is defined as an AF relapse more than 3 months following the intervention (after the blanking period). The main mechanism of that type of recurrence is pulmonary vein “reconnection”, as shown in several studies. Reconnection is the recovery of the electrical conduction between pulmonary veins and the left atrium (LA), and it favours an AF or atrial tachycardia relapse.15 A study conducted by Navinder et al. showed that in patients with structurally normal hearts and symptomatic PAF, the addition of linear lesions to the standard PVI procedure is associated with a greater incidence of left atrial flutter, as compared with segmental PVI alone. The recurrence represented by atrial flutter was due to an incomplete linear lesion drawn during the ablation procedure.16 The authors suggested that linear ablation should be avoided as an initial approach to ablation in this population of patients. Moreover, non-pulmonary veins foci, which are localised outside from the circumferential ablation lines, could also contribute to the initiation of AF.17 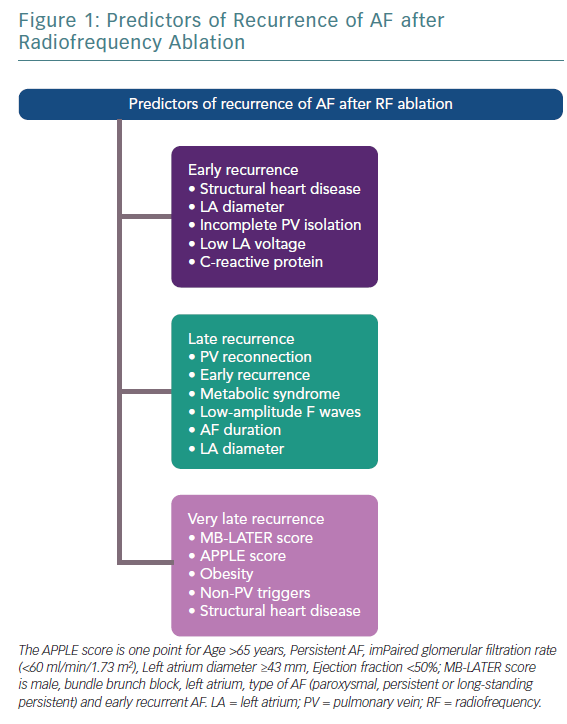 A few studies with prolonged follow-up periods (>5 years) suggested and introduced a new subtype of AF recurrence called very late recurrences. Relapses of AF long after the ablation are the result of the deterioration of the atrial tissue; progression of atrial fibrosis, enlargement of the LA, and the adverse electrical and molecular remodelling of myocardial tissue are involved in these types of recurrences.18 Thus, very late recurrence accounts for the final stage of the atrial electrical disease, even though further investigation on the topic is warranted (Figures 1 and 2).

To date, several predictors of recurrence have been identified in various studies. A publication summarising the data from the German Ablation Registry published by Sultan et al. described a few statistically significant predictors of AF recurrence after the ablation procedure. The registry data included a total of 3,703 patients undergoing CA for AF in 40 German centres, and the mean follow-up period was 463 days. The data showed that AF type, female sex and in-hospital AF relapse are strong predictors for AF recurrence, as well as comorbidities, such as impaired renal and cardiac function.19

A systematic review by Balk et al. on the predictors of AF recurrence after radiofrequency CA synthesises the data reported in 2,169 different citations, focusing their attention on the significant preprocedural patient characteristics, such as AF type, AF duration, left atrial diameter, left ventricular ejection fraction, sex, age, the presence of structural heart disease and the presence of hypertension.21 Their meta-analysis showed that not one of these clinical parameters is able to predict arrhythmia recurrences at a high level of evidence. The only clinical parameter that demonstrated a potential link to AF recurrence was AF type. A possible explanation of these results is that the studies on AF ablation are extremely heterogeneous regarding patient selection, patient characteristics, follow-up, variation in most of the clinical variables and procedural features.

Hof et al. reported LA volume as an independent predictor of AF recurrence.22 A notable limitation of evaluating LA size in these previous meta-analyses is the fact that dilated LA induced by AF may modify the ellipsoidal shape into a more trapezoidal shape because of atrialisation of pulmonary veins (PVs). Thus, a simple linear dimension may not be representative of LA size, such as anteroposterior diameter measured by the end-systolic LA in the echocardiographic parasternal long axis view. With LA geometry and changes in shape, MRI and CT could be more appropriate methods for evaluation of LA size.23–25 One report revealed that LA volume using magnetic resonance angiographic imaging was not related to the recurrence of AF after ablation.26 The concept of PV volume, measured with CT, as a predictor for AF recurrence was examined by Shimamoto et. al. Their study demonstrated that greater total PV volume and PV ostial area in PAF patients were related to AF recurrence after radiofrequency CA. They suggested a cut-off value of 12.0 cm3/BSA (m2) for the total PV volume, below which there was a good predictive value for sinus rhythm maintenance after CA in their PAF group.27

Regarding early recurrence, Bertaglia et al. observed that the presence of structural heart disease and the lack of successful isolation of all targeted PVs are predictors of early atrial tachyarrhythmia recurrence. A recent study by Mujovic et al. outlines that in patients with early recurrence of AF, the most common finding on repeated electrophysiology study is PV reconnection and the presence of roof line gaps.28 Other studies have indicated hypertension, left atrial enlargement, permanent AF and lack of superior vena cava isolation as predictors of early relapse of AF after ablation.7,29 Otherwise, the termination of AF during the ablation procedure, when compared with failure to terminate the arrhythmia with the necessity of an electrical cardioversion, predicts early and late success.30 A longer cycle length of AF in patients with persistent AF is also associated with termination of the arrhythmia and with overall success of the procedure.31 These data suggest that early recurrence might be associated to the presence of structural heart disease or of significant risks factors for heart disease, which lead to a higher degree of adverse left atrial remodelling and enlargement. A different meaning should be assigned to very early recurrence, which occurs within 48 hours from the ablation procedure.

Chang et al. suggested that longer procedural time and lower LA voltage were independent predictors of very early AF recurrences.32,33 Koyama et al. also reported that an increase in body temperature and C-reactive protein were associated with signs of pericarditis in patients with very early recurrence, hypothesising an inflammatory mechanism as a potential causative factor. In addition to that hypothesis, two recent studies showed that an increased preprocedural N-terminal prohormone of brain natriuretic peptide and an increase in postprocedural C-reactive protein and N-terminal prohormone of brain natriuretic peptide is associated with a higher AF recurrence rate.34,35

Recurrence of AF after the blanking period of 3 months after the ablation is the expression of PVs reconnection or incomplete transmural injury of the radiofrequency energy.36 One study underlined that obesity, metabolic syndrome and early recurrence are independent predictors of AF relapse. Interestingly, the relationship between early and late recurrence has been investigated in several studies.37 A prolonged procedure time and inducibility of AF or AT immediately after ablation have been found to predict independently late recurrence in patients with early recurrences of atrial tachycardia.38 However, some studies failed to find a predictive value of AF/atrial tachycardia inducibility at the end of the RF procedure.39

Right atrium enlargement, more than two procedural attempts, AF duration and left atrial enlargement (>43 mm) have also been included in the heterogeneous list of atrial arrhythmia recurrence after ablation.42,43 As already stated above, AF type may predict the outcome of the ablation, as non-PAF is associated with a 60% higher risk to relapse when compared with PAF. These data suggest that the failure to maintain sinus rhythm after >6 months from the procedure is strongly associated with an ineffective ablation procedure, as in the majority of cases it is possible to demonstrate PV reconnection or development of atrial tachycardia around incomplete ablation lines.

Furthermore, when PV reconnection is not present, the relapse is the consequence of the adverse electrical and anatomical remodelling associated with AF; repeated ablation attempts, low amplitude ECG waves, and atrial enlargement are strictly linked to myocardial fibrosis and lack of viable myocardial tissue. Therefore, as AF type is a hallmark of the underlying substrate, indication to catheter ablation in patients with non-PAF should be well balanced by cardiac electrophysiologists, as these patients have undoubtedly a worse outcome. 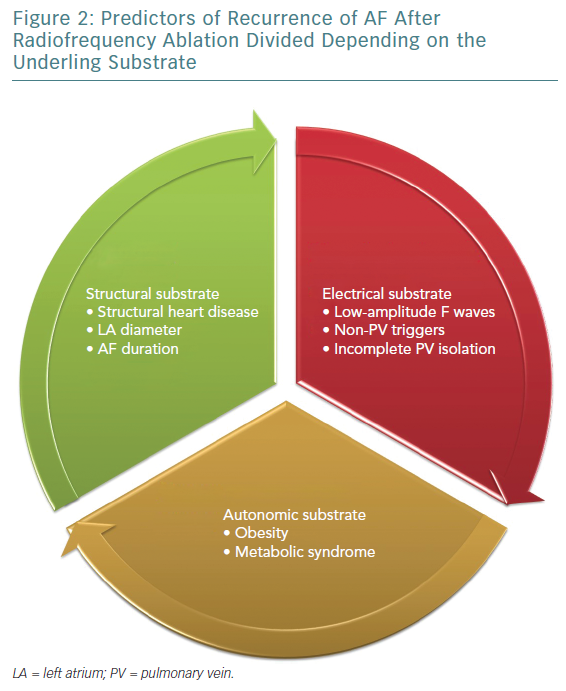 Very late recurrence has not been deeply evaluated in scientific studies. Recently, the MB-LATER (Male, Bundle brunch block, Left Atrium ≥47 mm, type of AF [paroxysmal, persistent or long-standing persistent] and ER-AF = early recurrent AF) score was developed as a predictive score for very late recurrence.44 The authors found that the MB-LATER score had better predictive ability for very late recurrence than the other widely used scoring systems, such as the APPLE, ALARMc, BASE-AF2, CHADS2, CHA2DS2VASc or HATCH score. Validation of the score has been reported in other large long-term follow-up studies.45,46

The APPLE score has been shown to predict low-voltage areas in the atria, which represent advanced remodelling processes, associated with higher rates of arrhythmia recurrences.47 Recurrence occurring >12 months from the procedure is not excessively frequent, and has been related to hypertension and left atrial enlargement.48 Mainigi found that the only predictors of very late recurrence were weight >90 kg and the presence of non-PV triggers in the case of a repeated ablation, whereas other studies underlined the role of right atrial foci.49 In one of the studies with the longest follow-up period, Weerasooriya et al. found that valvular heart disease and non-ischaemic cardiomyopathy were predictors of very late recurrence. On the basis of these data, very late recurrence can be considered a new type of AF, not depending on earlier triggers (e.g. PV foci), but originating from other areas of the atrium with a more advanced degree of adverse remodelling.50