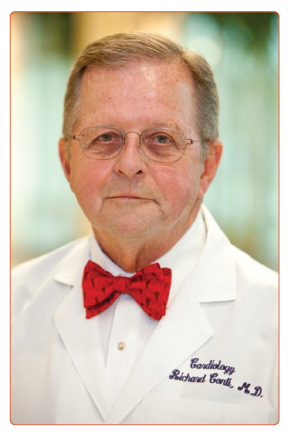 Prof C Richard (“Dick”) Conti, MD, MACC, EFESC, FCP(SA), FAHA, passed away unexpectedly on 21 February 2022. As his long-time colleague and close friend, I am honoured to have been invited by Editor-in-Chief Prof Juan Carlos Kaski to write this obituary for European Cardiology Review, where Dick served on the Editorial Board as an International Advisor for many years.

Dick was born in Bethlehem, PA, and graduated from Lehigh University in Eastern Pennsylvania. He received his MD in internal medicine and cardiology training at Johns Hopkins University, Baltimore, PA, and then joined the cardiology faculty in 1968 as an Associate Professor of Medicine, serving as Medical Director of the Cardiovascular Diagnostic Laboratory and the Wellcome Research Laboratory. During the Vietnam era, he served as Captain, Medical Corp, in the US Army.

In early 1974, he recruited several of us to move with him to the University of Florida (UF) College of Medicine in Gainesville, FL, where he served as Professor of Medicine and Chief of the Cardiology Division for a quarter of century until 1998. During this period, he developed a division that achieved national and international recognition and was awarded the newly created American Heart Association Eminent Scholar Chair in Cardiovascular Education in 1988. After he retired, he received the 2015 UF College of Medicine Faculty Council’s Lifetime Achievement Award.

One of his earliest and most important accomplishments was chairing the NHLBI National Cooperative Study comparing intensive medical therapy (IMT) with urgent coronary bypass surgery for acute management of unstable angina (1972–78). This pioneering prospective randomised trial confirmed that such patients could be stabilised with IMT, including propranolol and long-acting nitrates in pharmacological doses, with good control of angina in most and no increase in early mortality or myocardial infarction. Later, if angina failed to respond to IMT, elective coronary artery bypass grafting could be performed with a lower risk and good clinical results.

Dick was committed to education and excellence. During his career, he held positions on most American College of Cardiology (ACC) Committees and Task Forces, including the Board of Trustees, and was elected President 1989–90. He served on the Editorial Boards of the ACC and European Society of Cardiology (ESC) journals and many other peer-reviewed cardiovascular disease journals. During his long tenure (2000–10) as Editor of the ACC’s audio journal ACCEL Audio, his commitment to education was well documented in the recordings of his probing interviews and commentaries. Dick worked tirelessly to encourage medical students, residents and fellows to become involved in academic pursuits. He was a key part of the Florida ACC Chapter for over three decades and initiated the Chapter’s young investigator activities.

Through his international efforts and love of travel, he was involved in many ACC, ESC and other cardiology educational efforts throughout the world. Notably, he assisted the ESC in its growth and development in the late 1980s–2000s. More recently, he worked to assist the Chinese with their educational programmes via The Great Wall International Conference of Cardiology, which he helped to initiate and co-chaired with Prof Dayi Hu since 1989. He actively participated in the annual meetings in Beijing and their publications until the COVID-19 pandemic.

Dick Conti was incredible in his persistence for excellence in patient care and education, and these traits were also reflected in all other aspects of his work. Simply put, he made us all better cardiologists and better people. European Cardiology Review, and cardiology at large, have lost an important part of their history with Dick’s passing. He is survived by his wife of 64 years, Ruth, daughters Jill, Jamie and Jennifer, son Richard, five grandchildren and two great-grandchildren.

Most Recent Trials and Advances in Hypertension