Mitral regurgitation is an increasing valvular disease that represents a difficult management challenge. Surgical treatment for degenerative mitral regurgitation is the standard of care treatment. Percutaneous therapies have emerged rapidly over the past years as an option for treatment of mitral regurgitation for selected, predominantly high-risk patients. Catheter-based devices mimic these surgical approaches with less procedural risk. Mitraclip® implantation mimics the surgical edge-to-edge leaflet repair technique, reducing the regurgitant area. We review the increasing evidence with the Mitraclip device reported to date.

Disclosure: Olaf W Franzen is a consultant for Abbott Vascular. Eduardo Alegria-Barrero has no conflicts of interest to declare.

Diseases of the mitral valve (MV) are the second most frequent clinically significant form of valvular disease in adults. In particular, MV regurgitation occurs with increasing frequency as part of degenerative changes in the ageing process.1

The annual incidence of degenerative MV disease is estimated at approximately 2–3 %. In addition to degenerative valve disease, MV regurgitation can be caused by cardiac ischaemia (functional mitral regurgitation), infective endocarditis and rheumatic diseases (prevalent in less developed countries).1 Severe mitral regurgitation (MR) develops gradually over the years and carries a high annual mortality rate of at least 5 %.2 Medical therapy relieves symptoms but does not reverse the underlying mitral pathology.

Conventional surgical repair or replacement has been the standard of care for symptomatic severe MR.3,4 Those with degenerative MR (DMR) have excellent outcomes with repair surgery.5 However, the long-term benefits of surgical treatment of functional MR (FMR) are harder to demonstrate and remain controversial.6,7

Before the emergence of transcatheter valve therapies, optimal medical therapy and cardiac resynchronisation therapy in selected candidates have been the only treatment for patients deemed too high-risk for conventional surgery.8–11 Although a variety of MV transcatheter therapies grew in parallel with aortic valve therapies, the MV therapies have had a slower development path.2 Percutaneous edge-to-edge MV repair with the Mitraclip® system was demonstrated to be a safe and feasible alternative to surgical treatment for severe MR.12–15 Adverse valve morphology and severe left ventricular dysfunction have been the two major challenges for the treatment with the Mitraclip system.16–18

Degenerative Mitral Regurgitation
Degenerative MV disease frequently have leaflet prolapse due to elongation or rupture of the chordal apparatus, resulting in varying degrees of MV regurgitation due to leaflet malcoaptation during ventricular systole. Physiopathology of systolic flow reversal into the left atrium leads to atrial dilatation/fibrillation, ventricular function impairment and dilatation, secondary pulmonary hypertension and risk of sudden death.

Surgical Treatment
There are several types of degenerative MV regurgitation19,20 (see Figure 1). Current guidelines recommend MV repair when patients develop New York Heart Association (NYHA) class II symptoms, any deterioration in left ventricular function or an end-systolic diameter of 4.5 cm.21 Recent evidence suggests that the best outcomes after repair of severe DMR are achieved in asymptomatic or minimally symptomatic patients, who are selected for surgery soon after diagnosis on the basis of echocardiography.22 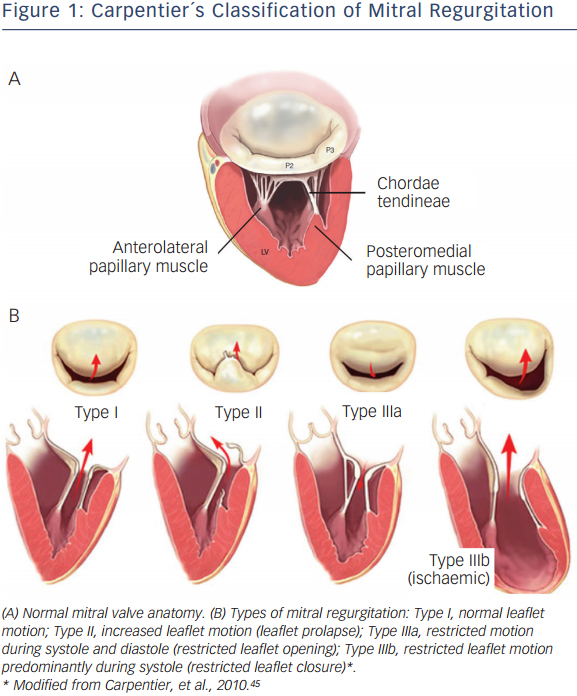 Download original
However, even in developed countries, MV replacement remains frequent in this setting. In the Euro Heart Survey, repair rates were documented around 50 %, meaning that MV replacement continues to be performed far too frequently in the modern era of reconstructive valve surgery.23

Valve repair in patients with degenerative MV disease is associated with an improved quality of life with less morbidity as well as better long-term survival as opposed to replacement. Recent guidelines on valvular heart disease21 contain a reported mortality for isolated MV repair of 1.6–2.1 % and 4.3–7.8 % mortality for MV replacement. More than 80 % of the patients are free from re-operation at five years.

Long-term survival following MV repair is similar to age matched controls if the operation is performed before the onset of symptoms, ventricular dysfunction or atrial fibrillation.25

Percutaneous Edge-to-Edge Repair
To date, up to 14,000 patients have been treated with the Mitraclip device worldwide, with nearly 2,000 enrolled in prospective clinical trials. The majority of patients included were considered at high peri-operative risk for MV surgery. After CE mark in 2008, numerous patients have been recruited in several studies. In 2013, the Food and Drug Administration (FDA) approved the Mitraclip device for symptomatic degenerative mitral valve regurgitation for patients at prohibitive risk for MV surgery by a heart team.

The Mitraclip system consists of a steerable guide catheter and a clip delivery system (CDS), which includes the clip attached at the end of the CDS (see Figure 2).26,27 The guide catheter is 24 Fr proximally, and tapers to 22 Fr at the point where it crosses the interatrial septum (see Figure 2). These steering controls allow the operator to manoeuvre the clip over the MV. The clip is Dacron-covered with two clip arms that are opened and closed by control mechanisms on the CDS. Leaflet tissue is secured between the clip arms and opposing grippers (see Figure 2). The clip arms are then closed to zero degrees, then locked to effect and maintain coaptation of the two leaflets.28 Technical success is achieved in a high number of procedures.29,30 In this technically demanding procedure, the co-operation and communication between the operators and the guidance by transoesophageal echocardiography (see Figure 3) are of great importance. Therefore, the effect of learning curve and co-operation between heart team members could impact on the clinical outcome in terms of MR reduction and complication rates.

The safety and efficacy of the percutaneous edge-to-edge with Mitraclip was initially tested in the Endovascular Valve Edge-to-Edge REpair Study (EVEREST I),15 and then compared with surgery in the randomised standard-risk patients EVEREST II trial.31 Procedural success was defined as successful and stable Mitraclip placement with residual MR ≤2+ on discharge. However, most of the patients enrolled in the EVEREST trials had DMR and all patients were surgical candidates. The real-world setting is very different from the original EVEREST trials – most of the patients treated with MitraClip are at high surgical risk and MR is more often functional rather than degenerative (see Table 1). 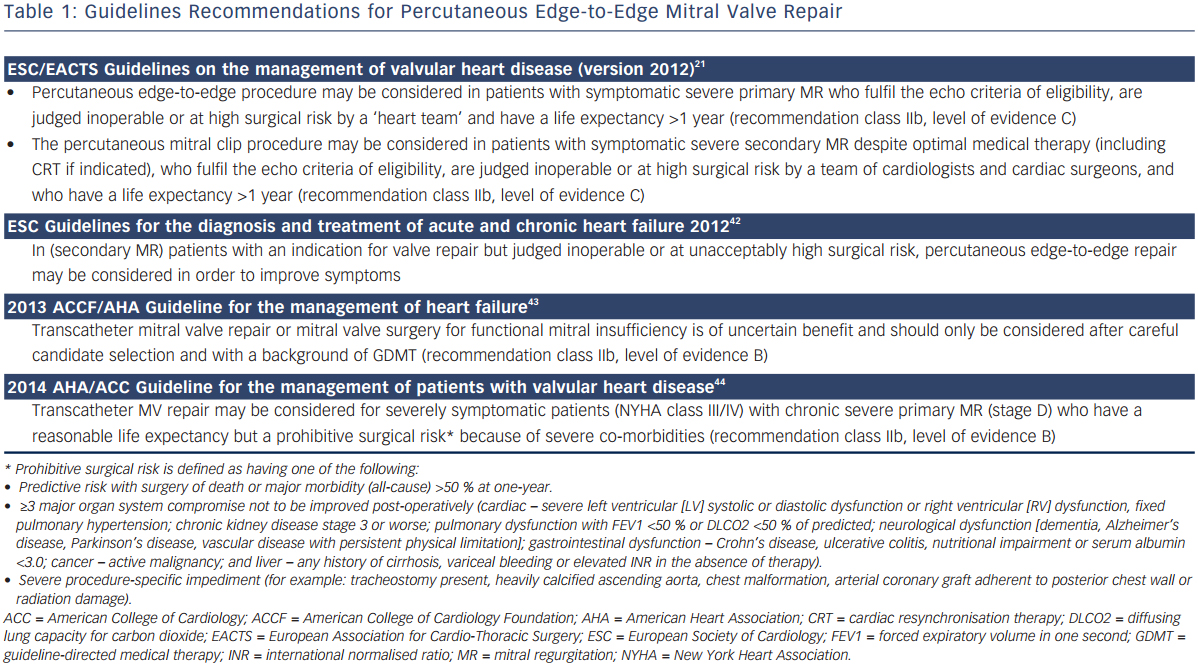 Of note, during the implantation of MitraClip, there is often a compromise between complete reductions of MR and resultant mitral stenosis by placing further clips. Several studies have reported that in these patients, significant improvement in symptoms can still be achieved despite a complete resolution of MR.30,32,33

FMR is associated with a poor prognosis in heart failure patients with post-ischaemic or idiopathic dilated cardiomyopathy.3 Surgical MV repair may be considered in severely symptomatic patients with severe FMR despite optimal medical therapy and cardiac resynchronisation therapy.35,36 Although several studies have reported reverse LV remodelling and improvements in symptoms and quality of life after surgical mitral repair,36 operative mortality is not negligible, ranging from 8.8 % to 21.0 %.37 Moreover, there is a high number of patients with severe FMR who are not referred for surgery because of advanced age, high surgical risk and co-morbidities.8

Surgical Treatment
Historically, the surgical approach to patients with FMR was to perform MV replacement, but it had a high impact on LV systolic function and exerted high mortality rates. Techniques of MV replacement, such as prosthesis implantation with preservation of the subvalvular apparatus, and prosthesis implantation with preservation of one or both leaflets (usually posterior) have evolved to improve the long-term haemodynamic function and clinical status of these patients38 Replacement should be reserved for cases of acute papillary muscle rupture in relation to acute myocardial infarction.39 In appropriately selected patients, restrictive annuloplasty is associated with low operative mortality and is effective in eliminating MR.

Acker et al.40 have recently published the randomised comparison of MV repair versus replacement for severe ischaemic MR. At 12 months, the rate of death was 14.3 % in the repair group and 17.6 % in the replacement group (hazard ratio with repair, 0.79; 95 % confidence interval, 0.42–1.47; p=0.45), with an increased rate of moderate or severe recurrence of MR at 12 months in the repair group compared with the replacement group (32.6 % versus 2.3 %, p<0.001). Patient selection for repair is crucial. When the pre-operative clinical and echocardiographic data suggest that annuloplasty alone is unlikely to be successful and durable, additional surgical procedures should be used to enhance the effectiveness of MV repair.39

Since FMR exerts high mortality and high incidence of recurrence of MR after repair, several alternative treatments have been proposed.

Recently, the new European guidelines included the MitraClip as a treatment option in high-risk and inoperable patients with FMR and severe symptoms despite optimal medical therapy (class IIb indication with evidence C) (see Table 1).21, 42–44 In the EVEREST II high surgical risk cohort, a 44 % reduction of the annual rate of hospitalisations was observed (0.82–0.46, p=0.0004) after Mitraclip implantation.

After EVEREST II trial results (EuroPCR2014), including standard-risk patients, future guidelines may consider Mitraclip treatment as an option for FMR since it exerts sustained reduction of MR severity, sustained improvement in LV volumes and dimensions, and sustained improvement in NYHA functional class at five years, with low rates of conversion to MV surgery overall.

Conclusions
MitraClip therapy is a safe procedure in selected high-risk patients and can be accomplished with low morbidity and mortality.

MV repair is the preferred treatment for degenerative MV regurgitation. However, Mitraclip implantation should be considered for high-risk surgical patients.

For FMR, Mitraclip is a valuable clinical option in patients with adequate anatomy who are considered inoperable or with a high surgical risk, and should be considered as an important therapeutic modality in the multidisciplinary treatment of heart failure. We need to treat patients at an earlier stage to achieve better prognostic outcomes. 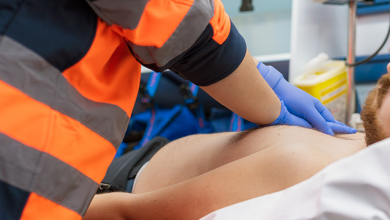 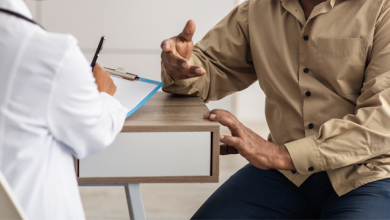