The field of pulmonary arterial hypertension (PAH) has recently been characterised by rapid improvements in therapeutic options and corresponding improvements in patient outcomes. In 1991, estimates from the US Department of Health and Human Services National Institutes of Health (NIH) Registry painted a grim portrait of survival in patients with pulmonary hypertension – then called primary pulmonary hypertension – with one, three and five-year survival rates of 68%, 48% and 34%, respectively. Currently, the survival rate has appreciably improved and this may be related to several factors including the advent of therapies for PAH that target pathways in the pathogenesis of disease. Several studies have demonstrated improvements in survival in patients treated with epoprostenol, the first PAH-specific therapy, versus controls from the NIH Registry or patients who received conventional therapy. Similar improvements in survival of patients with idiopathic PAH (IPAH) versus the NIH Registry have been reported for other agent classes, although long-term three- to five-year data are not available.

Within the past decade, the medical community has witnessed improvements in the convenience of administration of prostanoids and the introduction of two classes of agents with great therapeutic potential – endothelin receptor antagonists (ERAs) and phosphodiesterase-5 (PDE5) inhibitors. Furthermore, data from the initial trials of novel combination regimens are beginning to emerge, and myriad trials are planned or ongoing. The fast pace of change in the PAH treatment landscape necessitates frequent updates regarding both new treatments in development, including updates in treatment guidelines and clinical experiences with existing agents. This clinical briefing provides a snapshot of the latest developments in the treatment of PAH and highlights areas of future interest.

Currently available drug classes - prostanoids, ERAs and PDE5 inhibitors – each target a unique mechanism in the pathobiology of PAH and, in so doing, exert both antiproliferative and vasodilatory effects. These therapies focus on the abnormal interaction between the vascular endothelium and vascular smooth muscle cells, which favours a pulmonary vascular phenotype characterised by the overabundance of vasoconstrictor and proliferative agents and underabundance of vasodilator and antiproliferative substances. This condition has been defined as endothelial dysfunction and it represents one of the mechanisms to explain the initiation and progression of the obstructive pathologic changes typical of the lung microcirculation in PAH. Each class of drugs interacting with endothelial dysfunction is highlighted below.

Prostacyclin analogues, initially used in the early 1980s, are considered the first evidence-based treatment option in PAH. Prostacyclin is a vasodilator that also inhibits platelet aggregation and retards growth of vascular smooth muscle cells (see Figure 1). The efficacy and safety profile of prostacyclin analogues have been extensively reviewed and discussed in PAH treatment guidelines. Beyond improvements in exercise capacity, haemodynamics and functional class, the use of prostacyclin analogues provided a landmark in terms of demonstrating a survival benefit. The traditional route of prostanoid administration is through a central venous catheter and portable pump, which is cumbersome for the patients and prone to delivery system-related side effects. For these reasons, alternatives to intravenous administration have been sought and this has led to prostacyclin analogues that can be administered subcutaneously (treprostinil), by inhalation (iloprost), or orally (beraprost sodium, although its durability of effect has not yet been clearly established). Prostacyclin-based combination regimens and other reformulations are a focus of current and prospective clinical trials, and these studies will be discussed in a later section.

PDE5 catalyses the hydrolysis of cyclic guanosine monophosphate (cGMP) to its inactive 5-nucleotide monophosphate. Inhibitors of PDE5 prevent the breakdown of cGMP, thereby enhancing nitric oxide (NO)-dependent vasodilation mediated by cGMP (see Figure 1). Small preliminary studies have highlighted the potential for the PDE5 inhibitor sildenafil for the treatment of PAH, and the clinical profile of sildenafil evaluated in a larger, double-blind, placebo-controlled, dose-ranging study was recently published. Two hundred and seventy-eight patients with idiopathic or connective-tissue-disease-related PAH or PAH associated with surgically corrected congenital cardiac shunts were randomised to receive sildenafil 20, 40, or 80mg or placebo three times daily (TID) for 12 weeks, with a long-term extension planned in which all patients were treated with sildenafil 80mg TID. All doses of sildenafil significantly improved six-minute walk distance (6MWD), mean pulmonary artery pressure and World Health Organization (WHO) functional class versus placebo after 12 weeks of treatment. Among patients who were treated for more than one year in the long-term extension study, improvements in 6MWD were comparable with those observed at week 12 (51 and 48m, respectively). Survival at 12 and 18 months of patients with idiopathic PAH enrolled in this study was better when compared with the cohort of the NIH Registry.

Two other PDE5 inhibitors, verdenafil and tadalafil, have been evaluated preliminarily for the treatment of PAH. Results of large clinical trials have not been published as of this writing. PDE5 inhibitors appear to be generally well tolerated.

ERAs block the activation of endothelin receptors on endothelial or smooth muscle cells, thereby inhibiting the vasoconstriction and cellular proliferation mediated by endothelin (see Figure 1). Bosentan, a dual ERA, is currently the only agent in this class approved for the treatment of PAH. Clinical studies have shown that bosentan improves exercise capacity, haemodynamics, time to clinical worsening and functional class in patients with PAH. A current analysis of data from these studies indicated an appreciable survival benefit of bosentan treatment compared with the cohort of the NIH Registry. In addition, a recent randomised controlled study has shown efficacy of bosentan in improving exercise capacity and haemodynamics of patients with Eisenmenger's syndrome. One concern with bosentan treatment is the dose-dependent elevation of liver enzymes in about 10% of cases, which necessitates monthly monitoring of liver enzyme levels during treatment.

Sitaxsentan is a selective endothelin-A (ETA) receptor antagonist in a late stage of development. The efficacy of sitaxsentan 100 or 300mg once daily for 12 weeks versus placebo was initially assessed in the Sitaxentan To Relieve Impaired Exercise (STRIDE) 1 study. Sitaxsentan improved 6MWD by 35 and 33m (100 and 300mg, respectively; p<0.01) and both doses improved functional class and haemodynamic parameters (p<0.02). In contrast to bosentan, sitaxsentan was associated with an apparent lower risk for elevated aminotransferase levels more than three the upper limit of normal (ULN), although this benefit was lost in the higher sitaxsentan dosing group. Additionally, increases in international normalised ratio or prothrombin time associated with altered warfarin metabolism were observed. In a subsequent study (STRIDE-2), the efficacy of bosentan administered at labelled doses and sitaxsentan 100mg were directly compared. Results suggest comparable efficacy between sitaxsentan and bosentan, but with a somewhat lower risk of elevated aminotransferase levels in the former treatment group (4% versus 11%, respectively). A long-term extension of STRIDE-2 is in progress.

Ambrisentan is also a selective ETA receptor antagonist in late-stage clinical development for the treatment of PAH. Positive results were recently published from a phase II double-blind, dose-ranging study of ambrisentan 1mg, 2.5mg, 5mg or 10mg once-daily for six months in patients with PAH. Significant improvements in 6MWD were observed for all ambrisentan dose groups (p<0.05). Furthermore, improvements were reported in Borg dyspnoea index, World Health Organization (WHO) functional class and haemodynamics.

Ambrisentan was generally well tolerated, with a low incidence (3.1%) of elevated serum aminotransferase concentrations >3 ULN. The results of two large phase III clinical trials, Ambrisentan in PAH-A Phase III, Randomised, double-blInd, placebo-controlled, multicentre, Efficacy Study (ARIES)-1 and -2, are anticipated later this year. Indeed, ARIES-2 has been completed and the data are set for presentation at the International Conference of the American Thoracic Society (ATS) in May 2006. Preliminary information based on press releases shows that ambrisentan therapy improves exercise capacity, time to clinical worsening and quality of life of patients with PAH. Incidence of liver function test abnormalities appears to be low.

When available medical treatment resources fail, patients with PAH are considered for lung transplantation. Both single and bilateral lung transplantations have been performed for PAH, and these operations have been combined with repair of cardiac defects for Eisenmenger's syndrome. However, many transplant centres prefer to perform bilateral lung trans-plantation, in part because there are generally less post-operative complications. In patients with Eisenmenger's syndrome and those with end-stage heart failure, the option of heart-lung transplantation should be carefully considered. For some complex defects and in cases of ventricular septal defects, a survival advantage of heart-lung transplantation has been shown. The unpredictability of a patient's period on the waiting list – the average time is one-and-a-half to two years – and donor organ shortage complicate the decision-making regarding the appropriate timing of listing patients for transplantation. One important recent change in lung transplantation aimed at reducing deaths of patients waiting for a suitable organ and improving the chances of a successful transplantation is the development of the Lung Allocation Score – a system for prioritising patients on the transplant waiting list in the US. The Lung Allocation Score factors a number of important variables in determining patient priority on the waiting list, including 6MWD, pulmonary arterial pressure, New York Heart Association (NYHA) functional status, age, body mass index and lung diagnosis. These clinical parameters are updated every six months. It is currently unknown how the new scoring system will affect the wait time for patients with PAH in the US.

As the demand for organs far outstrips supply, innovations in bridging time from listing to transplantation are needed. Important innovations include right ventricular assist devices and the artificial lung, which is expected in some form within the next couple of years.

The potentially complementary mechanisms of action among the three current pharmacologic approaches provide rationale for investigation of these agents in novel combination regimens. Several studies have evaluated or are currently studying the feasibility of combination regimens. The Bosentan Randomised trial of Endothelin receptor Antagonist THErapy (BREATHE)-2 study compared 16 weeks of treatment with epoprostenol alone versus combination epoprostenol plus bosentan in 33 patients with PAH. Although there was a trend towards clinical and haemodynamic improvements with combination therapy, statistical significance was not met. The interim results of the iloprost inhalation solution and pilot safety (STEP) trial of inhaled iloprost and bosentan were recently reported. In this study, patients with PAH currently treated with bosentan were randomised to receive inhaled iloprost 5μg or placebo six to nine times daily as adjunct therapy. The combination of inhaled iloprost and bosentan improved 6MWD at the peak effect of the inhalation compared with placebo (treatment effect of 26 metres; p=0.051). The addition of inhaled iloprost to bosentan improved the time to clinical worsening (p=0.02) and haemodynamics at peak effect (p<0.001). The safety profile was consistent with known adverse events associated with iloprost, e.g. cough, headache, jaw pain and flushing). The Translational Research Investigating Underlying disparities in acute Myocardial infarction Patients' Health status (TRIUMPH) study is currently underway to assess the efficacy of inhaled treprostinil as an adjunct to bosentan.

Other pilot studies have demonstrated the feasibility of sildenafil-based combinations. In these early acute feasibility studies, sildenafil added to prostanoid therapy had a greater effect on haemo-dynamic parameters than prostanoid alone. Other notable studies have investigated sildenafil and bosentan. In a recent study by Mathai et al. addition of sildenafil to bosentan (n=18) significantly improved 6MWD from 223.6 to 307.6 metres (p=0.04) and the proportion of patients in NYHA class I or II (0% versus 27.7% on combination, p=0.02). However, four out of the 18 patients discontinued due to adverse events. The COMPASS-1/2 programme is planned to investigate the safety and efficacy of bosentan in combination with sildenafil versus sildenafil monotherapy. 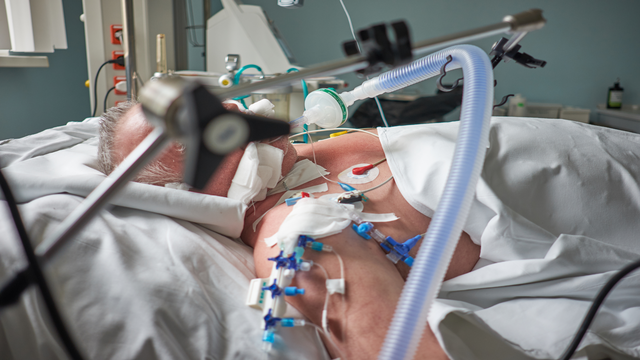 Ethical Issues in Decision-making Regarding the Elderly Affected by Coronavirus Disease 2019: An Expert Opinion
Read Article