Cardiovascular disease (CVD) is the most prevalent non-communicable cause of death worldwide.1 The health and economic implications of caring for a growing ageing population with CVD is enormous. Maintaining a “healthy” elderly population that is mobile and independent with a good quality of life is vital. Testosterone is a sex hormone that is predominant in males, being secreted from the testes and adrenal glands, but it also occurs in lower concentrations in females, where it produced in the ovaries. In men, testosterone is primarily involved in sex differentiation and the development of secondary sex characteristics at puberty and it also contributes to spermatogenesis. It is involved in sex drive in both men and women.

Testosterone and Treatment of CVD

The purpose of testosterone replacement is to normalise low testosterone levels to improve symptoms. Clinically this is advised in patients with symptomatic hypogonadism supported by biochemical evidence; however, many of the studies presented in the following discussion have included men with low testosterone but not necessarily other signs of hypogonadism. Research interest has focussed mainly on the effects of testosterone treatment on the CV conditions of coronary atherosclerosis, myocardial ischaemia, heart failure and, more recently, in cardiac electrophysiology, see Figure 2. 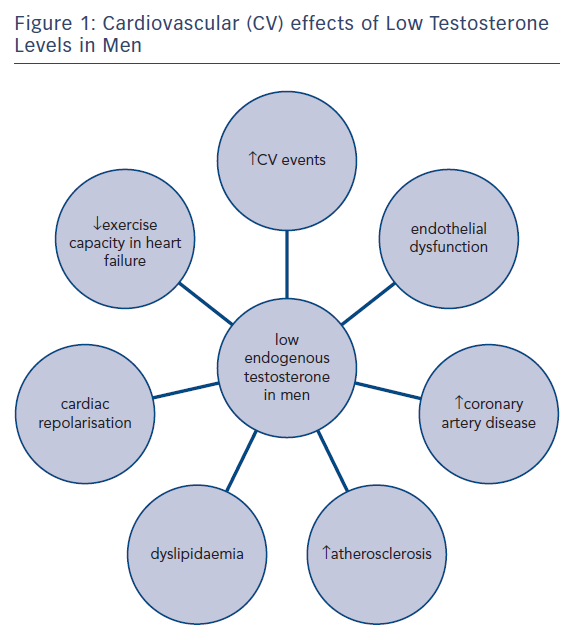 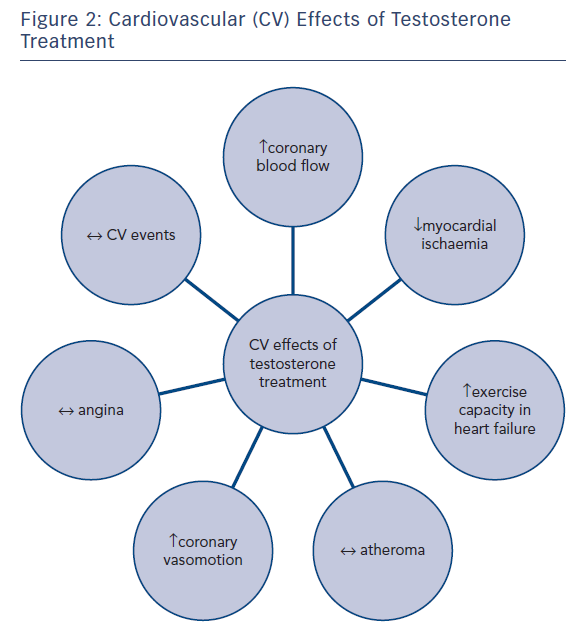 The evidence to date indicates that testosterone treatment reduces total and LDL-cholesterol concentrations.16–18 The evidence is less clear for HDL-cholesterol and may depend on the route of administration and resultant plasma concentrations of testosterone.15 Triglycerides are generally not changed by testosterone treatment.19 The Testosterone Replacement in Hypogonadal Men with Type 2 Diabetes and/or Metabolic Syndrome (TIMES2) study showed a reduction in lipoprotein(a) in hypogonadal men with and without T2DM or/and the metabolic syndrome treated with testosterone gel.16 In contrast, high doses of testosterone or anabolic steroids dramatically derange lipid profile.20

Observational studies indicate that low testosterone concentrations have a detrimental effect on atherosclerosis. For example, testosterone concentrations are negatively associated with carotid artery intimamedia thickness, a measure of atheroma burden.24 The long-term consequences of testosterone supplementation on atherosclerosis in older men have been the focus of a number of recent studies. The Testosterone’s Effects on Atherosclerosis Progression in Aging Men (TEAAM) trial was designed to determine the effect of increasing circulating testosterone concentrations into a range that is mid-normal for young men on subclinical atherosclerosis progression in older men with low or low-normal testosterone levels, but not necessarily with symptoms of hypogonadism.25 The TEAAM trial enrolled just over 300 men in a randomised, placebo-controlled study of testosterone gel. This trial failed to show any benefit of testosterone compared with placebo on carotid intima-media thickness and coronary calcium, which were the co-primary endpoints, nor on the secondary outcomes of sexual function or quality of life. The authors commented that the results may have been influenced by concomitant medications such as statins and that the results of measures of sexual function may differ in men with symptomatic hypogonadism. Following on from TEAAM, the Cardiovascular Trial, one of the seven placebo-controlled Testosterone Trials,26 investigated the effects on coronary atherosclerosis of 1 year of testosterone gel treatment in 138 older, symptomatic, hypogonadal men, assessed by coronary computed tomographic angiography.27 Up to 50 % of this study population had CAD or risk factors for CAD.27 Compared with placebo, testosterone treatment was associated with a significantly greater increase in coronary artery non-calcified plaque volume and total plaque volume. Similar to the TEAAM trial, there was no significant effect on coronary calcium score. An increase in atheroma burden does not necessarily translate into an increased rate of CV events, and neither study was powered to draw conclusions on this. These studies provide evidence for caution in the use of testosterone treatment. Larger studies are needed to understand the clinical implications of these findings.

Testosterone deficiency is estimated to affect approximately a third of men with chronic heart failure. Low circulating levels of testosterone independently correlate with exercise intolerance in men with heart failure41 and relate to the muscle-wasting characteristic of the condition.42 The excess of catabolic hormones and a relative deficiency of anabolic hormones in heart failure have been well documented,42,43 and in the past decade testosterone has been investigated as a potential therapy to correct the anabolic balance.

The first study was a small randomised, double-blind, placebocontrolled, cross-over trial that included men with chronic heart failure.44 Compared with placebo, a single dose of buccal testosterone increased cardiac output and reduced systemic vascular resistance, with the maximal effect coinciding with maximal free testosterone concentrations at 180 minutes.44 Since then, the same group and others have shown the beneficial effects of a variety of testosterone preparations on exercise capacity, oxygen consumption and functional class, with treatment periods lasting from 12 weeks to 12 months.45–47

There has been one study of testosterone treatment undertaken in elderly women with heart failure.48 Given via a transdermal patch for 6 months, testosterone significantly increased the distance walked in a 6-minute walk test and improved peak oxygen consumption, despite the women having pre-treatment testosterone concentrations in the normal range.48 The authors speculated that a peripheral mechanism of action might explain this effect.

A meta-analysis published in 2012 reinforced the beneficial effect of testosterone treatment on exercise capacity and oxygen consumption in patients with heart failure.49 However, reports of the effects of testosterone treatment on muscle strength in men with heart failure are not consistent, with some showing a null effect45 and others finding a benefit.46 This may be because none of these studies included patients with cachexia or muscle wasting. Apart from the testosterone patch,45 generally testosterone was well tolerated in heart failure studies to date. However, on average these studies only lasted a few months and the numbers included were small. Future studies with a longer duration of treatment, a larger study population and including patients with muscle wasting should produce valuable evidence with which to guide clinical practice.

Testosterone administration in hypogonadal men can cause sideeffects such as erythrocytosis (more so with oral preparations), fluid retention, benign prostatic hyperplasia, hepatotoxic and neoplastic effects (mostly with oral preparations but not testosterone undecanoate), gynaecomastia and acne and skin reactions (mostly with patches).64 Increased haematocrit and haemoglobin levels and small detrimental effects on lipids have also been documented. There is much controversy over the association of testosterone treatment with an increased incidence of prostate cancer, which is discussed in detail elsewhere.64,65 In brief, there is no evidence for an increased risk of prostate-cancer-specific death related to testosterone treatment in either direction; however, there is evidence implying that testosterone treatment may adversely affect the progression of prostate cancer.66 Large-scale, long-term trials are needed to clarify the safety of testosterone treatment. The current recommendation from the Endocrine Society is to make “a careful diagnosis of androgen deficiency only in men with consistent symptoms and signs and unequivocally low serum testosterone levels”, then to treat men with confirmed symptomatic androgen deficiency with testosterone therapy.67 Once testosterone treatment is initiated, it is suggested that mid-normal range testosterone levels are aimed for and that therapy is monitored using a standardised plan.67

Low endogenous testosterone concentrations can affect risk factors for CVD, atheroma development and vasomotion beyond the blood vessels of the reproductive system. They are associated with coronary atherosclerosis and heart failure in approximately a third of men. The discrepant results of clinical studies of testosterone replacement in older men with hypogonadism have resulted in controversy over its clinical use, largely concerning variances in CV event rate and the ability of these studies to generate reliable data on this endpoint. Testosterone treatment is not without sideeffects and risks. The Endocrine Society 2010 clinical practice guideline and the European Menopause and Andropause Society give detailed recommendations on the use of testosterone therapy in men with androgen deficiency, supporting such treatment in men with symptomatic androgen deficiency (repeated early morning low serum testosterone levels) followed by scheduled testing for efficacy and adverse events.67,68 Testosterone treatment is not recommended in men with breast or prostate cancer, suspected or increased risk of prostate cancer, haematocrit >50 % or uncontrolled heart failure.67,68 Individualised management of patients is recommended, including the evaluation of comorbidities and careful risk–benefit assessment, and not general prescription of testosterone therapy to all ageing men with low testosterone.67,68 A number of professional organisations agree that there is no consistent evidence that testosterone treatment either increases or decreases CV risk.68 Large studies with hard CV endpoints in older symptomatic hypogonadal men are needed encompassing longer-term treatment periods and investigating the differing types of testosterone replacement available in order to provide strong evidence on which to base clinical decisions in this population.