Historically pregnancy has been viewed as only clinically relevant to women and for the relatively brief time from conception to the puerperium. However it is now clear that events during pregnancy have much longer-term implications, particularly for cardiovascular health, both for the mother and her offspring.

Offspring born to women who have experienced pregnancy complications also display adverse cardiovascular findings. Those born preterm have increased blood pressure in adolescence13–18 and adult life,19–26 with a 10.5 % prevalence of clinical hypertension and 45.9 % prevalence of prehypertension in 19-year-old preterm born adults.16 They are also relatively more likely to require antihypertensive medication in young adulthood.27 Preterm born women have a doubling of lifetime coronary heart disease risk28 and offspring born prior to 32 weeks have a twofold increase in cerebrovascular disease.29 Some evidence is also emerging of increased insulin resistance in those born preterm,19,20,22,23,30 which may be a precursor to later development of metabolic syndrome31 or type 2 diabetes.30

In a meta-analysis using data from 45,249 individuals we reported an increase in systolic and diastolic blood pressure in children and adolescents born to preeclamptic pregnancies32 that, if it tracked into adult life, would be associated with an 8 % increased risk of mortality from ischaemic heart disease and a 12 % increased risk of stroke.32 These findings are supported by our analysis of data from a 20-year prospective follow-up birth cohort study of 2,868 young adults, which reported that the clinical incidence of hypertension was increased in those born to mothers who had hypertensive disorders of pregnancy.33 These young adults were 2.5 times more likely to have global lifetime risk (QRISK®) scores above the 75th centile and 30 % of 20-year-olds with hypertensive blood pressures were born following a hypertensive pregnancy. Those whose mother had more severe hypertensive pregnancy disease, such as preeclampsia or preterm birth, had a threefold greater risk of being clinically hypertensive.33 Furthermore, one study showed that offspring of preeclamptic pregnancies were more likely to be prescribed antihypertensive medication by the age of 50 years34 and had double the risk of stroke in adult life35

Figure 1 highlights potential links between pregnancy complications in the mother and future cardiovascular health for them and their child, as well as the risk of pregnancy disease in future generations.

A number of risk factors common to both pregnancy complications and cardiovascular disease might explain these links. Raised blood pressure, high maternal age, diabetes and obesity increase the risk of preeclampsia;1,36–41 whereas smoking,42 lower socioeconomic group43 and maternal age44 are risk factors for preterm delivery. Pregnancy complications might therefore unmask existing subclinical cardiovascular disease in the mother due to the physiological stress she is under. Alternatively there may be common disease mechanisms between pregnancy and cardiovascular disease. Unfortunately longitudinal studies that track from pre-pregnancy through to later life clinical events do not exist and therefore it remains difficult to unpick these associations. Cross-sectional observational studies that measure surrogate markers several months and years after affected pregnancy can be informative of potential pathophysiological associations. However, the majority of such studies recruit during or after pregnancy and so the relevance of the cardiovascular system pre-conception in these populations is not yet clear. Nevertheless, what these studies have shown is that women who delivered preterm had higher blood pressure, adverse lipid profiles and higher carotid intima media thickness 4–12 years after delivery compared to women who delivered at term.45 Women with a history of hypertensive pregnancy have an adverse cardiac structure and function, with higher left ventricular mass index and greater diastolic dysfunction.46 They also have evidence of greater blood pressure,47 arterial stiffness,48 reduced capillary density49 and adverse grey and white matter brain differences.50 These studies suggest that there is a range of adverse cardiovascular phenotypic differences in women in the months and years after complicated pregnancy prior to the development of cardiovascular events. The identification of higher risk subgroups within these populations might therefore be possible and risk reduction strategies could be targeted to reduce cardiovascular morbidity and mortality.

Similar phenotypic differences are also evident in the offspring early in life. We have demonstrated cardiovascular modifications in young adults born preterm using cardiovascular magnetic resonance.51,52 Those born preterm had an increased left ventricular mass and a distinct ventricular shape with shorter ventricles, small internal diameters and a displaced apex.52 Similar but proportionately greater differences were evident in the right ventricle51 with associated left and right systolic and diastolic dysfunction.51,52 These distinct cardiovascular phenotypes emerge in the first few months of postnatal life in preterm infants,53 probably because at birth there is a myocardial switch from a foetal hyperplastic cellular phenotype to one of hypertrophy.54 Animal models have demonstrated that this switch also happens at the time of preterm birth.55,56 This switch, in addition to significant flow changes, may result in the cardiac remodelling that has been observed in both animal and human studies.

It has been suggested that preterm birth also has an effect on vascular structure and function, with several studies reporting that large arteries are significantly smaller in children, adolescents14,57–59 and adults born preterm.60 Abnormalities in the microvascular system have also been demonstrated, with a reduction in cutaneous capillary61–63 and retinal vascular64–66 beds in individuals born preterm. Capillary rarefaction is thought to play an important role in the increased peripheral vascular resistance found in patients with hypertension.67–69 It has also been hypothesised that microvascular changes may play a causative role in the disease as it is also observed in normotensive at-risk populations70 and arteriolar narrowing in the retina has been shown to be an accurate predictor of hypertension.71 Several mechanisms for these microvascular differences have been put forward, including that preterm birth causes a shift towards a more anti-angiogenic profile, which may then have an effect on microvascular development. Young adults born preterm have been shown to exhibit an enhanced anti-angiogenic state, with elevations in soluble endoglin and soluble fms-like tyrosine kinase-1 that are associated with elevations in blood pressure mediated through capillary rarefaction.62 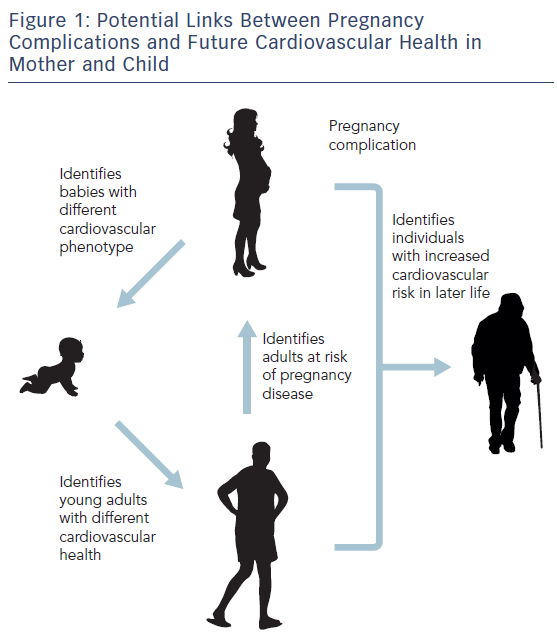 The offspring of hypertensive pregnancies also have a distinct cardiovascular phenotype characterised by impaired flow-mediated endothelial responses25 and an increased intima-media thickness25 suggesting an early atherogenic phenotype consistent with the aortic arterial thickening known to occur in preeclamptic offspring at birth.72 A recent study has also demonstrated cardiac remodelling in adolescents exposed to hypertensive disorders of pregnancy, with a greater relative wall thickness compared to controls and a reduced left ventricular end-diastolic volume.73 The natural history of these cardiovascular modifications linked with pregnancy complications and their relevance to future cardiovascular disease risk is of emerging interest.

Where does this Leave Clinicians and Researchers?

National and international guidelines include a maternal history of hypertensive pregnancy as a risk factor for cardiovascular disease and some also offer recommendations that blood pressure and other cardiovascular risk factors should be assessed postpartum.74–78 Most guidelines do not offer detailed recommendations, however, and leave the specifics on how to follow up this population to the clinician.74 The potential from using a history of pregnancy complication for the early identification of individuals at increased cardiovascular risk, both for mothers and offspring, is highly attractive as it could potentially allow a significant time window for risk attenuation. Future research into which are the most sensitive characteristics of pregnancy complications for identifying individuals at increased cardiovascular risk will be of value.

Understanding why there are links between pregnancy complications and cardiovascular disease remains of importance for two major reasons. First, it will help to identify populations who are at a higher risk of developing cardiovascular disease in later life. This could enable targeted education schemes and primary prevention strategies, in addition to rigorous monitoring pathways, for both mother and child, which might result in earlier diagnosis and treatment. Second, it raises the possibility of insights into novel mechanisms that might have relevance to our understanding and management of both pregnancy and cardiovascular disease, ultimately leading to novel therapeutic approaches.