Defining the best management strategies for patients with stable ischaemic heart disease (SIHD) has been the subject of scientific study for nearly 50 years since the advent of coronary artery bypass grafting (CABG) surgery by Favaloro in 1967 and, a decade later, the development of percutaneous coronary intervention (PCI) by Gruentzig in 1977.1,2 Randomised controlled trials of CABG surgery versus medical therapy were initiated in the late 1970s and 1980s in patients with SIHD and showed that revascularisation reduced MI and mortality in subsets of patients with three-vessel and left main coronary artery disease (CAD).3–5 In the 1990s, randomised controlled trials of PCI versus medical therapy, initially with balloon angioplasty (Angioplasty Compared to Medicine [ACME] and Second Randomised Intervention Treatment of Angina [RITA-2]), were similarly undertaken in SIHD patients and showed significantly better angina relief and treadmill exercise performance with PCI, although no reduction in death or MI.6,7 Nevertheless, the widespread availability of PCI greatly expanded the number of patients who could be revascularised safely and pushed revascularisation therapy to become routine for SIHD patients in many locales.

Contemporary Studies of Revascularisation During the ‘Optimal Medical Therapy’ Era

The medical therapy used in the CABG and early PCI trials consisted primarily of antianginal agents and aspirin, the latter only used in 20% of patients, because statins, angiotensin-converting enzyme (ACE) inhibitors, angiotensin receptor blockers (ARBs) and thienopyridines had not yet been developed.5 By 2000, as these newer so-called ‘disease-modifying therapies’ came into more widespread clinical use and were combined with strategies of aggressive risk factor intervention and control, the contemporary era of ‘optimal medical therapy’ (OMT) came into existence and formulated a more relevant comparator to revascularisation than antianginal therapies alone. Beginning with the Clinical Outcomes Utilizing Revascularization and Aggressive druG Evaluation (COURAGE) trial in SIHD patients and, shortly thereafter, the 2nd Bypass Angioplasty Revascularization Investigation in Diabetes (BARI 2D) trial, comparative effectiveness trials of OMT with or without revascularisation were undertaken to address whether prognostically important endpoints such as death or MI could be favourably affected when either PCI or CABG was added to OMT versus OMT alone.8,9 These trials, which now also include the Fractional Flow Reserve and Angiography for Multivessel Evaluation 2 (FAME 2) trial and, most recently, the International Study of Comparative Health Effectiveness With Medical and Invasive Approaches (ISCHEMIA), have set a new standard for defining whether incremental cardiac event reduction could be achieved by combining both revascularisation with OMT (Table 1).10–14

The COURAGE trial randomised 2,287 SIHD patients to PCI plus OMT or OMT alone.8 The BARI 2D trial randomised 2,368 patients with type 2 diabetes to revascularisation (two strata each randomising patients to OMT with PCI or CABG versus OMT alone as clinically determined by site investigators).9 In the COURAGE trial, PCI plus OMT did not reduce the primary endpoint of death or MI compared with OMT alone over a median 4.6 year follow-up period. Although revascularisation did improve quality of life (QoL) in the COURAGE trial, the QoL improvement was limited to 2 years.15 In BARI 2D, revascularisation with either PCI or CABG surgery did not reduce the primary endpoint of all-cause mortality over a 5-year follow-up, although CABG plus OMT was found to be superior to OMT alone for the secondary endpoint of death, MI or stroke (p=0.01), which was driven solely by a decrease in non-fatal MI. This benefit was not observed for PCI.9

The FAME 2 trial, performed in the early 2010s, was a relatively small trial of 888 SIHD patients who were randomised to fractional flow reserve (FFR)-guided PCI plus medical therapy versus medical therapy alone using more contemporary second-generation drug-eluting stents. The study was stopped early at a median follow-up of only 7 months after an interim analysis revealed the primary endpoint (a composite of death, MI or urgent revascularisation) was substantially reduced in PCI-treated patients, driven solely by a reduction in urgent revascularisation.10 Although there was no difference in mortality at both 2 and 5 years of follow-up, there was a statistically marginal reduction in MI in the PCI-treated patients.11,12 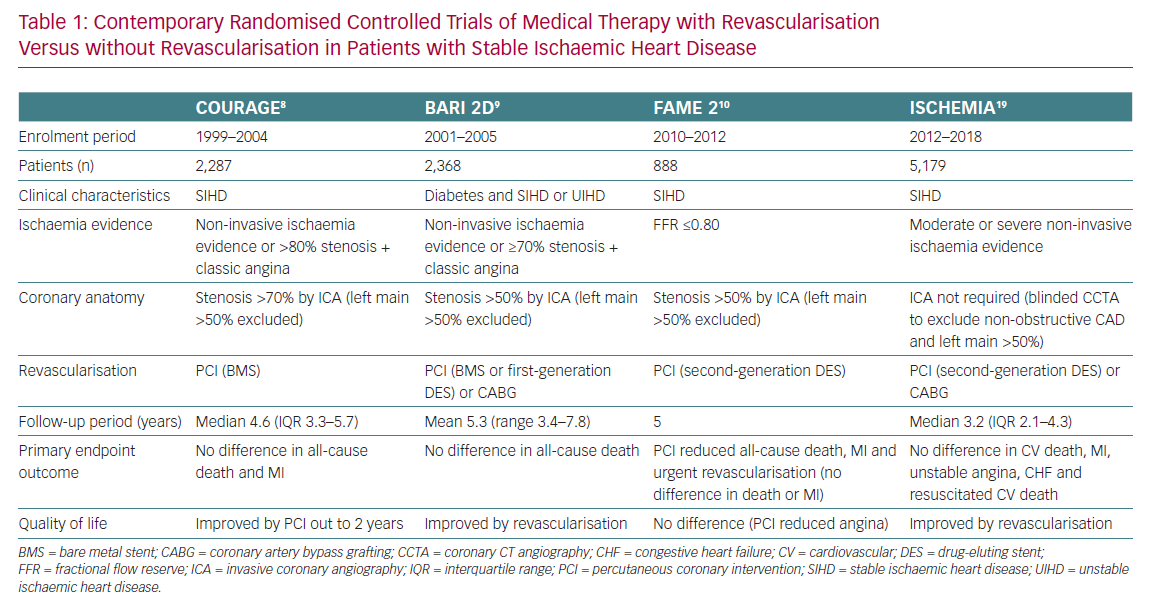 The COURAGE, BARI 2D and FAME 2 trials had limitations. None of these trials was blinded. They all included the enrolment of patients with only mild amounts of inducible ischaemia. In addition, patients were enrolled only after the results of coronary angiography were known, which raised the possibility that SIHD patients with more extensive or severe coronary disease may have been excluded from trial participation due to selection bias. These limitations resulted in incomplete acceptance of the results, with continuing routine revascularisation for mortality and MI reduction in SIHD patients who demonstrated a higher ischaemic burden.

In fact, the basis for an interventional approach to SIHD patients with moderate to severe ischaemia was fuelled by observational data from the Cedars-Sinai group in more than 10,000 patients from the 1990s, in whom it was observed that, at levels of baseline ischaemia >10% of the left ventricular myocardium, there was a significant reduction in cardiac events during long-term follow-up, although these findings were not randomised and the medical therapies used antedated the current use of statins, ACE inhibitors, ARBs and thienopyridines.16,17 With nearly 500,000 PCIs and 400,000 CABGs performed in the US in 2014, the public health implications of understanding the effects of revascularisation continued to be enormous.18

These prior studies and their limitations set the stage for conducting ISCHEMIA, the largest randomised controlled study of revascularisation in patients with SIHD ever conducted and designed to prospectively test the ‘ischaemia hypothesis’ by more thoroughly evaluating the potential risks and benefits of revascularisation by addressing the aforementioned limitations of the prior SIHD strategy trials.19 By design, ISCHEMIA required that all patients have at least a moderate burden of inducible ischaemia at baseline, as demonstrated non-invasively, as a prerequisite for randomisation. Patients were enrolled prior to coronary angiography to eliminate anatomical selection bias, although blinded coronary CT angiography (CCTA) was performed to selectively exclude patients with left main and non-obstructive disease. After randomisation to an invasive strategy (invasive coronary angiography followed by revascularisation plus OMT) or a conservative strategy (OMT only, with invasive coronary angiography and revascularisation reserved for patients with persistent angina symptoms who failed medical therapy or who were suspected of reaching a study endpoint), revascularisation was performed, either by CABG or PCI, as clinically determined. Specific coronary artery revascularisation was encouraged to be physiologically directed using FFR-guided PCI using second-generation drug-eluting stents. The primary endpoint was a composite of cardiovascular death, MI, hospitalisation for unstable angina, hospitalisation for congestive heart failure and resuscitated cardiac arrest. The major secondary endpoints were cardiovascular death or MI, as well as angina control and QoL. The mean follow-up period was 3.2 years.13

Ultimately, 5,179 patients were randomised from among 8,518 subjects screened for moderate to severe ischaemia at baseline.13 The patients were predominantly men (77%), with 41% having diabetes, 20% having prior MI and the mean LVEF being 60%. Patients had relatively low burdens of angina (95% Canadian Cardiovascular Society 0–2), but more than 50% had severe ischaemia and 45% had three-vessel disease as determined by CCTA. Medical therapy was excellent, with 96% of patients receiving aspirin and 95% of patients receiving statin therapy (66% high-intensity statin, 24% ezetimibe). By the end of the study, the median LDL achieved was 1.66 mmol/l, the median blood pressure achieved was 129/74 mmHg and the median HbA1c was 6.3%.13

More than 95% of patients randomised to the invasive strategy underwent invasive coronary angiography, with 80% of all patients undergoing revascularisation (54% by stenting, 20% by CABG). Those not undergoing revascularisation had disease deemed unsuitable for either CABG or PCI, and, of these, nearly 60% had non-obstructive disease. Of note, 21% of patients assigned to the conservative strategy also underwent revascularisation by the end of the study, mostly due to suspected endpoints or unacceptable angina (a rate of ‘cross-over’ of approximately 6.5% per year).

Thus, what is the real message of ISCHEMIA to both academic and practising cardiologists alike? Conservative management of SIHD is safe. Even patients with a high ischaemia burden should not be rushed into invasive therapy under the implied guise of reduced MI or mortality. All patients with newly diagnosed SIHD should be initiated on guideline-directed medical therapy, given information about the risks and benefits of additional invasive therapy and allowed a reasonable period of time to deliberate the decision as to whether to proceed to the catheterisation laboratory. Healthcare providers should make a conscious effort to counteract the impression that immediate invasive therapy reduces the overall risk of MI or death. This is essential if we are to meet our goal of achieving truly meaningful shared clinical decision-making for our patients, with individualised treatment decisions, but only after there has been a transparent and full disclosure of all the benefits and risks of all treatment choices.

The invasive approach clearly has benefits. Invasive therapy reduces angina, with greater benefit in more symptomatic patients. It also reduces late spontaneous MIs and hospitalisations for unstable angina, although the rate in ISCHEMIA was very low overall. These benefits need to be considered in the context of the significantly higher rate of early procedural (Type 4A and Type 5) MI, although it remains unclear whether these MI events result in worse clinical outcomes. A detailed MI analysis and longer-term follow-up of ISCHEMIA are important to understand these late benefits and early risks more fully. It is likely that the net benefits will persuade many patients to proceed with the invasive strategy, although, conversely, it is also easy to envision that a conservative strategy may be the preferred approach of patients who are only minimally symptomatic, those who have extensive clinical comorbidities and/or those with limited life expectancies

The results of ISCHEMIA would suggest strongly that CCTA is integral to pursuing the conservative strategy, because approximately 15% of ISCHEMIA enrollees were found to have non-obstructive disease on CCTA, despite moderate or severe inducible ischaemia, and were not randomised. For this subgroup, CCTA importantly altered their diagnosis and affected their subsequent therapy, although only a small percentage of patients was followed longitudinally in a registry and thus the prognosis of this subgroup is largely unknown. Another approximately 8% of patients were found to have significant left main disease on CCTA and were not randomised. Historically, patients with left main disease have greater risks of ischaemic events than other coronary disease subgroups and derive greater benefits from revascularisation. Therefore, for these patients, invasive management should generally still be preferred. CCTA may also be helpful in identifying other particularly high-risk subgroups of patients, such as those with diabetes and three-vessel disease. The results of ISCHEMIA to date tell us that clinical outcomes in these subgroups were not favourably altered by revascularisation, but without adequately powered subgroup analyses from ISCHEMIA on such patients, other high-quality contemporary data, such as those derived from the Future Revascularization Evaluation in Patients with Diabetes Mellitus: Optimal Management of Multivessel Disease (FREEDOM) and Surgical Treatment for Ischemic Heart Failure (STICH) trials, compels us to still consider revascularisation.20,21

As previously noted, ISCHEMIA addressed many of the prior limitations of the COURAGE, BARI 2D and FAME 2 trials and showed consistent results. Based on these collective study findings, we believe it is prudent that SIHD management should move a step further away from routine invasive management and towards a paradigm of greater non-invasive evaluation, aggressive medical therapy and individualised invasive therapy only for subgroups of patients in whom medical therapy fails or where clinical benefit is proven.