The development of increasingly sensitive and specific serum cardiac biomarkers has led a revolution in the diagnosis and management of acute coronary syndrome (ACS). However, although the troponins now in use are considered highly sensitive cardiac biomarkers in the general population, the interpretation of troponins in patients with acute kidney injury (AKI), chronic kidney disease (CKD) and end-stage kidney disease (ESKD) has long caused diagnostic uncertainty.

The metabolism and excretion of troponins are affected by changes in estimated glomerular filtration (eGFR) rates, making single values often unhelpful.1,2 Diagnosis of an acute coronary episode using the recommended serial measurements of cardiac biomarkers is more important than ever in the renal population due to the higher prevalence of non-ST-segment elevation MI (NSTEMI). However, increasing evidence shows that it is important not to disregard the results even in those patients in whom there is no dynamic change in troponin values. Studies show that the chronically elevated troponin concentrations seen in CKD and ESKD patients are associated with increased cardiovascular events and mortality.3 This careful and considered approach to looking at troponins means that although they are a useful component of the ACS diagnostic pathway, they can also act as a trigger for addressing cardiac risk factors in this high-risk population.

AKI is a common diagnosis among hospitalised patients. A recent meta-analysis, using the Kidney Disease Improving Global Outcomes (KDIGO) definition of AKI, demonstrated that one in five adults hospitalised worldwide (21.6%) experienced AKI, and that this was associated with high morbidity and mortality.4 The incidence of AKI is increasing, particularly among the elderly, a population that also experiences multiple comorbidities, including a high incidence of ACS.5 The common causes of AKI are sepsis, hypovolaemia, nephrotoxins and urinary obstruction. Kidney function and renal clearance change rapidly during the evolution of AKI to its peak and then during recovery. This means careful consideration is required with regard to the interpretation of serum biomarkers and drugs used to treat ACS that are metabolised and secreted by the kidneys. 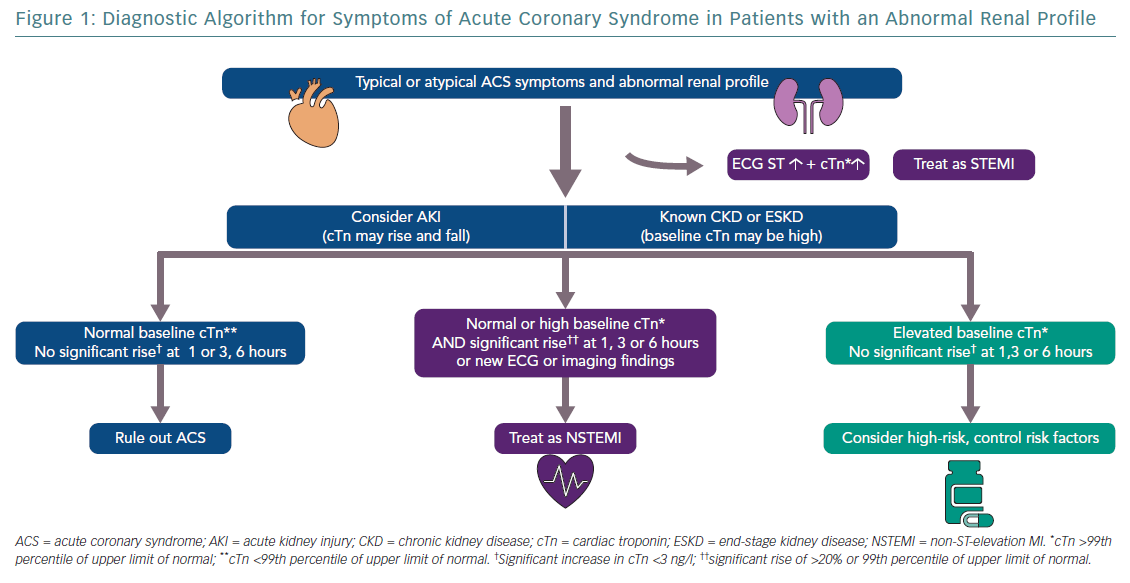 Metabolism of Cardiac Biomarkers by the Kidney

The kidneys play a major role in the metabolism and clearance of small peptides and proteins.6 For example, insulin concentrations increase with decreasing kidney function due to reduced excretion. Peptides and small proteins are partially filtered through the glomerular filtration barrier and enter the proximal tubule where they are reabsorbed by the megalin–cubilin complex and are metabolised in the lysosome.6,7 Various serum biomarkers, including cardiac biomarkers, are handled by the kidney in a similar manner. Therefore, interpretation of the serum concentrations of these biomarkers presents an additional challenge in the context of AKI, where glomerular filtration changes rapidly during on-going injury and then recovery. Similarly, the concentrations of these peptides are chronically elevated in patients with CKD and ESKD.

In the past 50 years, numerous serum biomarkers have been discovered and are now used in conjunction with ECG changes and clinical presentation in the diagnosis of ACS. Initially, non-specific markers, such as white blood cell count, were used. The first enzyme biomarker to be used was aspartate aminotransferase in the 1960s, followed by the discovery of lactate dehydrogenase and creatinine kinase later that decade, and the muscle/brain fraction of creatinine kinase (CK-MB) in the 1970s.8 However, over the past three decades, cardiac biomarkers, particularly troponins, have become increasingly sensitive and specific, and are now the cornerstone for the diagnosis of ACS.

Troponins as cardiac-specific biomarkers were described for the first time in the late 1980s.9 Troponins T, I and C are components of the cardiac troponin complex, which is integral to actin–myosin interaction and cardiac muscle contraction.6

Troponin C exists in the skeletal muscle and hence is not cardiac specific. Non-functional free subfractions of troponin move from the myocardial cell cytoplasm into the circulation promptly after myocardial injury.10 Unbound cytosolic troponin T (cTnT), which is released after acute injury, is approximately 6% of all troponin T pool in the cell, and 3% for cardiac troponin I (cTnI) pool. cTnI is a smaller molecule than cTnT (~187 versus 288 amino acids, respectively).10

In one study from the late 1990s, serum cardiac biomarkers were measured in 67 samples from 24 ESKD patients without any history of acute heart disease and no regional wall motion abnormalities on echocardiogram.11 CK-MB was increased in at least one sample in 30% of patients, whereas cTnT was increased in 71%. In the same study, troponin T was demonstrated in skeletal muscle biopsy, suggesting possible expression of troponin T in skeletal muscle with myopathy associated with ESKD.11 However, cross-reaction with the skeletal muscle isoform of troponin T is now considered less significant due to improvements in immunoassays.12

Although there have been advances in the sensitivity and specificity of cardiac biomarkers, the interpretation of troponin in CKD and dialysis patients remains a challenge. Many studies have investigated concentrations of cardiac troponins with decreasing glomerular filtration. One such study explored cardiac troponin concentrations in 489 patients referred for 51Cr EDTA or isohexol eGFR estimation due to any clinical indication.14 Patients were divided by the presence or absence of prior MI, heart failure, chronic angina or atrial fibrillation, and those with recent ACS were excluded. Concentrations of cTnT, cTnI, copeptin, N-terminal pro B-type natriuretic peptide (NT-proBNP), heart-type fatty acid binding protein (H-FABP) and cystatin C were higher in patients with increasing CKD stages, regardless of prior history of cardiac disease.14

Studies looking at the behaviour of cardiac biomarkers in dialysis patients offer different explanations as to how concentrations may be affected by treatment, and suggest some differences in behaviour between the different types of troponins.15 For example, some studies suggest that haemoconcentration may increase troponin levels, whereas others suggest that troponin levels may be lower as a result of dialysis clearance.

Part of the universal definition of MI states that at least one troponin value must be above the 99th percentile upper reference limit.13 However, chronic, stable, elevated troponin concentrations have been demonstrated in the CKD population in the absence of any clinical evidence of a myocardial ischaemic event.16 Perhaps the most commonly adopted approach to this problem is to look for a change of more than 20% between two values taken several hours apart, although there is no real evidence to support this strategy and there is a potential to underestimate myocardial events.17

AKI is common in patients with ACS. In a large American retrospective study, 26.6% of patients diagnosed with ACS also had AKI (defined in that study as a rise in serum creatinine of 0.3 mg/dl).21 Prompt diagnosis of ACS in patients also diagnosed with AKI is important to ensure appropriate, tailored management for both conditions.

Several possible mechanisms play a role in the increase in cardiac biomarkers in AKI. During AKI there may be a degree of non-ischaemic myocardial necrosis or myocardial injury, as seen with heart failure, cardiac arrhythmias and cardiac interventions. Furthermore, conditions that may precipitate AKI, such as sepsis and hypotension, may also cause a comparable myocardial injury, and hence increase cardiac biomarkers (by definition, a type 2 MI).22

In an early study, serum cardiac biomarkers were compared between patients with AKI and those with CKD (creatinine 120–200 µmol/l), severe CKD (creatinine 200–400 µmol/l) and on haemodialysis.23 The patients with AKI had severe AKI (creatinine >500 µmol/l), and many had multiorgan dysfunction requiring continuous venovenous haemodiafiltration. Active ischaemic heart disease was ruled out with clinical features, ECG and echocardiogram. Concentrations of cTnT and cTnI were highest in patients with AKI. On serial measurements of three AKI patients, recovery of renal function was associated with a fall in cTnT to undetectable levels.23

In another study of 19 AKI stage 2 and 3 patients, 39 samples were obtained at admission, peak creatinine and discharge.1 Patients with multiorgan failure, ACS, pericarditis, myocarditis, sepsis, heart failure, pulmonary embolism and cardiac arrhythmias were excluded.1 Concentrations of hs-cTnT were elevated in 32% of patients.1 The patients with elevated hs-cTnT were older and had minor ECG abnormalities.1 Concentrations of hs-cTnT, hs-cTnI and CK-MB tended to fall with AKI recovery and hospital discharge.1 That study helpfully demonstrated that, even when removing confounders such as ACS and sepsis, AKI still results in elevated cardiac biomarkers.1

Very interesting observations were made from a large database of 17,113 matched cTnT and creatinine values in 10,418 patients admitted to a single hospital.2 The cardiovascular disease history of the patients was unknown, and 3,108 pairs of results were obtained within a short period of time (median 15 hours; interquartile range 7–25 hours).2 Within that short period, the cTnT values rose and fell with increasing and decreasing kidney function, suggesting renal clearance as a cause of the rise and fall rather than cardiac injury.2 Concentrations of cTnT increased and decreased with kidney function >120 and 5 ml/min, respectively.2

We have reviewed the interesting and growing literature available on the topic of troponin interpretation in kidney patients from AKI through to ESKD. Although considerable advances have been made in the use of cardiac biomarkers to aid diagnosis, it is clear that a degree of caution is required in their application to renal patients.

In terms of practical clinical implications, a few conclusions can be drawn, although these are far from definitive. It is clear that it is important not to completely discount high troponin concentrations in CKD and ESKD patients. Elevated troponins are associated with increased cardiovascular risk, and discounting this means we run the risk of mismanaging cardiac risk factors, underinvestigating a very high-risk population or, indeed, missing acute events.

Drawing upon the full combination of biomarkers, ECG, cardiac imaging, clinical history and physical examination (and, where appropriate, coronary angiography) will be vital in diagnosing and treating patients correctly (Figure 1).

To date, adjusted algorithms for the interpretation of troponin in renal patients have been, at best, partially successful. It seems sensible to continue to use serial troponins in kidney disease patients as advised by the Joint Task Force of the ESC, American College of Cardiology Foundation, the American Heart Association and the World Heart Federation for diagnosis in patients without kidney disease.24 More research is needed to discover new biomarkers and to better use the available biomarkers in AKI, CKD and ESKD patients for the early diagnosis of and better outcomes after ACS.