Although treatment optimization in patients with heart failure and reduced left ventricular ejection fraction (HFrEF) may result in left ventricular reverse remodelling (LVRR) in some cases, predictors of this phenomenon are scarce. This study aimed to: 1) determine the incidence and predictors of absence of LVRR after treatment optimization in patients with HFrEF and its potential effects on indications of prophylactic implantable cardioverter defibrillator (ICD) implantation, 2) create a risk score of absence of LVRR.

Consecutive outpatients with left ventricular ejection fraction (LVEF) ≥ 35 %
were included in this observational prospective study. Up-titration of angiotensin-converting enzyme inhibitors (ACE inhibitors) / angiotensin II receptor blockers (ARBs), beta-blockers, aldosterone antagonists and ivabradine was performed in our Heart Failure (HF) Unit. The absence of LVRR was defined as the persistence of an LVEF 35 % at the 6-month follow-up.

One hundred and seven patients were included, age 66 ± 12 years, 79 (74 %) male, 48 (45 %) with ischaemic cardiomyopathy (ICM) and 59 (55 %) with non-ischaemic cardiomyopathy (non-ICM). At the 6-month follow-up, 64 %, 76 %, 72 % and 7 % of patients were taking 100 % of the target dose of ACE inhibitors/ARBs, beta-blockers, aldosterone antagonists and ivabradine, respectively. LVRR was observed in 48 % of the overall population and in 33 % and 60 % of patients with ICM and non-ICM, respectively, p< 0.005. Consequently, we observed a marked reduction (52 %) in potential ICD indications after the optimization of HF pharmacological therapy [99 (95 %) at baseline to 45 (43 %) at the 6-month follow-up, p< 0.001], that was more pronounced in non-ICM than in ICM patients: 65 % vs 35 %, p = 0.003. ICM, prolonged HF duration and larger left ventricular end-diastolic diameter index (LVEDDI) were independent predictors of the absence of LVRR. A risk score of absence of LVRR was created based on these predictors. Patients were divided into three groups according to the risk of the absence of LVRR: low risk (≤ 4 points), intermediate risk (5-9 points) and high risk (≥ 10 points). The probability of the absence of LVRR increased as the score increased according to each risk group. The observed probabilities and those predicted by the scoring system differed by < 2 % (Figure 1). The risk score based on these predictors showed a c-statistic value of 0.81. Three patients died during the study period (2.8 %). 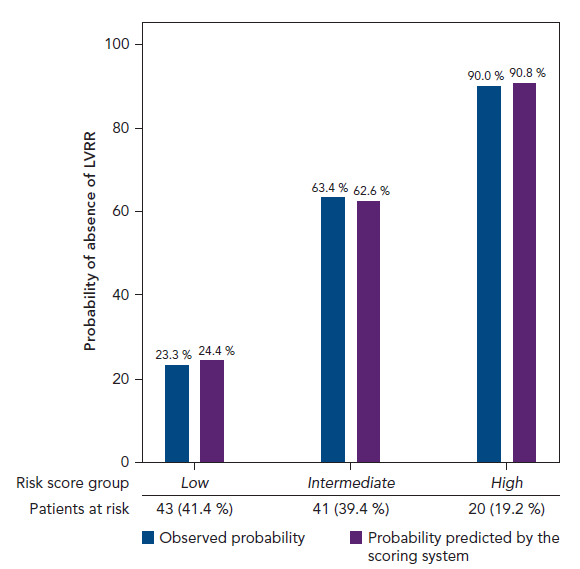 In patients with HFrEF, target doses of disease-modifying drugs can be reached in most patients and are associated with LVRR in approximately half of cases, reducing potential ICD indications in parallel. Ischaemic cardiomyopathy, prolonged HF duration and larger LVEDDI predict the absence of LVRR and favour ICD implantation without delay. The risk score based on these variables identifies the absence of LVRR with a high discriminatory capacity.