Transforming a critically narrowed coronary vessel to one that is angiographically smooth and unobstructed is immensely satisfying. However, if the procedure is examined in its component parts, it is surprising that this technique is considered safe with minimal overt clinical complications. Temporary vessel occlusion renders the downstream myocardium ischaemic, while vessel trauma initiates inflammatory processes inherent to repair, and plaque debris, platelet aggregates and thrombus shower the microvasculature.

This article sets out to examine the physiological consequences of percutaneous intervention at a microvascular level. The effect of vessel occlusion on the myocardium is determined by the duration of ischaemia, the amount of tissue supplied and the tolerance of the myocardium at a cellular level. In addition, the extent to which angioplasty affects physiological processes depends on the degree of pre-existing ischaemia and the interventional substrate, e.g. chronic total occlusions or unstable lesions in the context of an acute coronary syndrome.

Many of the assumptions made regarding the effect of percutaneous intervention on coronary physiology are based on vessel ligation in animal models, which may incompletely reflect mechanisms at play in the pro-thrombotic, pro-inflammatory milieu commonly associated with ischaemic heart disease.

The effect of intervention on coronary flow is complex. It is appreciated that blood flow is determined not only by the degree of epicardial obstruction, but equally by the status of the microvasculature and available collateral support.

Dichotomous physiological responses have been demonstrated whereby in some studies flow has been shown to increase post intervention while in others there is clear impairment of microvascular flow and an increase in microvascular resistance. Available data do not explain entirely why one mechanism predominates under individual circumstances, but it likely reflects the balance of vasoconstrictive and vasodilatory mechanisms together with the degree of luminal obstruction.

It has been shown that following restoration of flow in a previously obstructed vessel, an increase in blood flow above basal levels frequently occurs - a phenomenon known as reactive hyperaemia. This adaptive phenomenon is believed to repay the oxygen debt of the ischaemic episode.

Reactive hyperaemia is mediated by myogenic responses to changes in shear stress and the metabolic conditions - provoked by the preceding ischaemia - and occurs virtually instantaneously. Adenosine, nitric oxide (NO) and the potassium adenosine triphosphate (ATP) channel are all believed to be involved. It is thought that the myogenic response is predominantly controlled by NO-related mechanisms, while activation of the potassium ATP channel mediates the metabolic response. Heterogeneity of this response has been observed with it being most pronounced in the sub-endocardial vessels and least in the sub-epicardium reflecting the degree of ischaemia. Similarly the relative contribution of myogenic and metabolic stimulation appears to vary according to vascular size. The smallest vessels (<50µm) are most sensitive to metabolic factors, the intermediate arterioles (50-80µm) are most sensitive to myogenic activation and the large arterioles (>80µm) respond to flow-induced dilatation.

In 1986 Murry et al. described a phenomenon now recognised as ischaemic preconditioning, whereby infarct size as a result of acute coronary occlusion may be attenuated by a preceding period of ischaemia. It is believed that this protective mechanism is related to potassium channel opening in the sarcolemma and is possibly triggered by isoforms of protein kinase C, adenosine and bradykinin. The duration of vessel occlusion is short before initiation - 180 seconds - although longer periods of occlusion may be needed with age. Prolonged balloon inflations may activate this physiological response, which may also be a factor in patients who have experienced ischaemic episodes in the 24 hours prior to the procedure.

In addition to the attenuation of myocardial ischaemic damage, preconditioning also has an effect on the vasculature by speeding up the response of the coronary vasculature to vasodilator stimuli.

Conversely, in the context of ischaemia, myocardial blood flow may be impaired post intervention in spite of the abolition of epicardial obstruction. The phenomenon known as no-reflow is demonstrated angiographically by sluggish clearance of contrast. While reactive hyperaemia is not clinically overt, no-reflow is often associated with dramatic haemodynamic decompensation, is often irreversible and is associated with an adverse prognosis.

No-reflow is estimated to occur in 2% of patients undergoing an elective procedure and 30% of patients with acute myocardial infarction. By definition, no-reflow reflects an end-point in a pathological process and is associated with no antegrade flow. However, less severe degrees of flow impairment are frequently observed angiographically and are likely to reflect similar pathophysiological mechanisms.

Myocardial ischaemia provokes a cascade of proinflammatory reactions including activation of the complement system, adherence of neutrophils to the coronary endothelium, leukocyte-mediated injury and the production of cytokines. Consequently, intracellular degradation products such as adenosine monophosphate (AMP), adenosine diphosphate (ADP) and adenosine hypoxanthine increase. The associated increased levels of calcium ions in turn activate xanthine oxidase resulting in oxygen free radical production. These processes have the potential to destroy endothelial cell membranes and cause protein denaturation with resulting loss of cellular integrity.

Furthermore, in response to ischaemia there is an increase in anaerobic production of osmotically active substances such as lactate, leading to an increase in intracellular water content. As a result, myocytes and endothelial cells become swollen with large intraluminal projections, which potentially compromise flow.

During reperfusion the increase in hydrostatic pressure exacerbates this cellular and interstitial oedema and may lead to diffuse capillary rupture with haemorrhage into ischaemic tissue. Oxygen-derived free radicals formed at the time of reperfusion further damage cellular integrity potentially leading to contractile dysfunction.

Following coronary intervention it has been shown that there is adrenergic vasoconstriction throughout the coronary tree that can be attenuated by the administration of adrenergic blockers. In vivo this effect is counterbalanced by complex vasodilatory mechanisms including those mediated by NO, adenosine, potassium ATP channels and shear stress described earlier.

Luminal obstruction at a microvascular level is exacerbated by the release of potent vasoconstrictors, such as serotonin, and pro-inflammatory cytokines in response to ischaemia and vascular sludging with thrombotic material, platelet aggregates and plaque debris.

The divergent effects on myocardial blood flow as described above have led to controversy regarding the immediate and long-term effects of coronary intervention on microvascular responses.

Assessment of Physiological Responses to Intervention

Assessment of the direct effects of percutaneous intervention on coronary physiology in humans has generally been restricted to measurements obtained using the Doppler flow wire or pressure wire, although there are increasing reports of the use of myocardial contrast echo in this context.

The parameters most frequently used to examine physiology are the coronary flow reserve (CFR) and the fractional flow reserve (FFRmyo). CFR is the ratio of basal coronary flow to that at maximum hyperaemia and reflects the plasticity of the vascular tree in response to ischaemia, which is determined by the degree of epicardial obstruction and microvascular resistance. The resistance is determined by distal coronary pressure and is non-uniformly distributed throughout the myocardium. The FFRmyo is the ratio of distal coronary pressure to aortic pressure and reflects the degree of epicardial obstruction.

Following intervention it has commonly been shown while the FFRmyo satisfactorily increases as the lesion is abolished, the CFR remains abnormal and this reflects changes in the microvasculature. A reduced flow reserve may be associated with residual epicardial obstruction (which can be excluded by a normalised FFRmyo), microvascular obstruction leading to increased resistance and attenuation of both basal and hyperaemic flow or, alternatively, an increase in basal microvascular flow as a result of reactive hyperaemia. Only by combining such measures of pressure, flow and resistance can the effects of intervention on coronary physiology be correctly described. 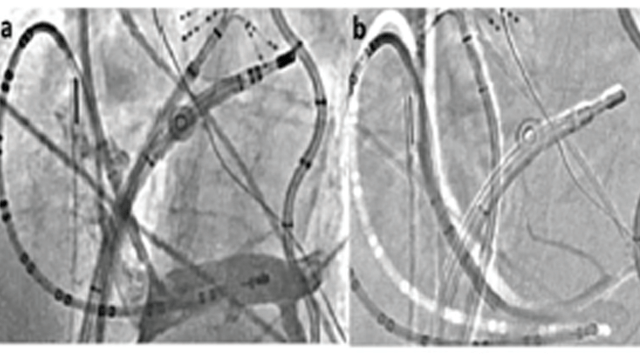