Meditation as a form of body–mind interaction for primary and secondary prevention in cardiovascular disease has been discussed critically in the past. However, data that aimed to link this intervention to a reduction of various aspects of cardiovascular disease, rendering it a potential part of a cost-effective treatment approach in patients at risk, remain scarce and inconclusive. This article aims to provide an overview of currently available evidence in the literature and the potential impact of meditation on cardiovascular health. However, the data highlighted in this article cannot render with certainty directly reproducible effects of meditation on patients’ cardiovascular disease profiles. Meditation may be suggested only as an additional link in the chain of primary and secondary prevention until future research provides sufficient data on this topic.

Cardiovascular disease is a major cause of morbidity and mortality worldwide. While traditional treatment protocols follow physical or pharmaceutical interventions, the mental approach of meditation has been used for centuries to induce beneficial changes to the patients’ cardiovascular risk profile. However, scientific refurbishment of this technique has in the past raised questions of legitimation. Therefore, we aimed at providing an overview of currently available evidence in the literature, and subsequently conclude on the potential impact of meditation on cardiovascular health.

Meditation practice is an active mental process involving the pursuit of awareness, attention, concentration and general focus of the practitioner’s mind.1 It can be described as a form of mental training with the aim of regulating cognition and emotion; a specific directing of attention and awareness is meant to influence mental and somatic events.2 Meditation dates back several thousand years, and has a religious (Buddhist and Hindu) connotation and background. It has been used to improve stress management, therefore rendering it feasible to use in a strict therapeutic approach.3–6

A broad variety of meditation practices have been described; however, “focused attention meditation”, “open monitoring meditation”, “compassion meditation” and “loving kindness meditation” roughly form the main styles. Most forms are intended to be practised once or twice daily.2,7 A short description of the different core meditation strategies is given in Table 1.

Following a predefined search protocol (input combinations of the term “meditation” and the following: “hypertension”, “blood pressure”, “atherosclerosis”, “endothelial”, “metabolic”, “insulin”, “myocardial”, “ischaemia”, “smoking”, “tobacco”, “stress”, “lifestyle” and “prevention”), the databases PubMed/MEDLINE, EMBASE, CENTRAL and Google Scholar were searched for eligible articles (Figure 1). The search was conducted at the end of February 2019. In addition, articles from the reference list of retrieved articles or reviews were screened to detect further sources. Duplicates and papers found to be non-relevant were removed. All selected publications were read in detail as a full text or abstract. All research reporting on the influence of meditation on cardiovascular risk reduction was included. Two independent authors screened and reviewed the included information. Data on practices similar to meditation, such as yoga or various forms of martial arts, were excluded due to their dominant physical character. Eligible original research and reviews were included within the consensus of this manuscript. Based on little evidence in this field, a pooled analysis of different kinds of meditation was performed. 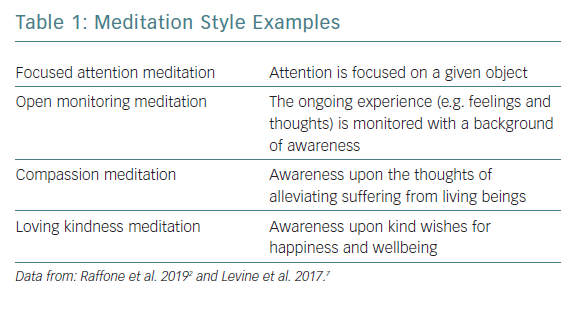 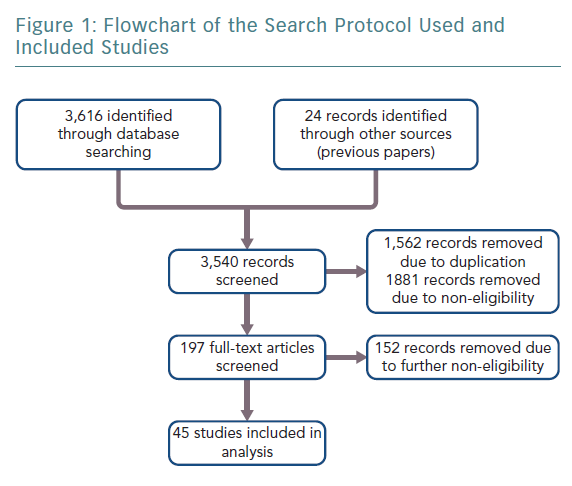 Meditation and its Impact on (Patho-)physiology

A broad variety of hypothetical and potential effects of meditation on neurophysiology and neuroanatomy have been published so far.7,8 Anatomical and structural changes, such as tissue augmentation of the cerebral cortex, subcortical grey and white matter, as well as the cerebellum and brain stem, were discussed, and an increasing number of studies suggest that different meditation practices show distinct patterns of brain activity.1,7,9,10 Moreover, improvement in the subjectively experienced levels of general stress, depression and quality of sleep have been reported.8,11–22 Additionally, alterations on a neurophysiological level have been suggested. However, due to a lack of sufficient sample size and randomisation, suchlike series must be assessed carefully and interpreted with caution.7,10,20,23,24 Complex data derived from neuroimaging, such as PET or functional MRI, are promising to produce deeper insight, but are yet to be fully understood.10

While smoking poses one of the major causes of both the development and progression of cardiovascular disease, its cessation has proved to be a highly effective primary and secondary approach for improved cardiovascular health.25 Meditation as a technique for smoking cessation and/or prevention might be more successful than traditional interventions in this regard.7,26–29 Tang et al. suggested that these results might originate from increased activity in the anterior cingulate and prefrontal cortex.30 Classic study limitations, such as small sample sizes (between 200 and 300 participants) and lack of follow-up, render this topic a subject of future additional research. However, a potential benefit of meditation in improving the compliance and adherence of smoking cessation can be assumed based on the current evidence.

Several randomised trials have evaluated the effect of meditation on arterial hypertension, with varying effects from a reduction of a mean of 21.9 (±8.3)/16.7 (±4.6) mmHg after 8 weeks of meditation treatment to no significant benefit, as shown by Blom et al. in the Hypertension Analysis of stress Reduction using Mindfulness meditatiON and Yoga (HARMONY) trial.18,31–39 Of note, it needs to be highlighted that styles of meditation, which additionally cover physical activity, appear to be even more effective in this regard.7 Whereas the American Heart Association recommends meditation to be considered as an alternative approach to lower patients’ blood pressure, the high variation of study results suggests meditation to be considered as a mere supplement to pharmacotherapeutic hypertension management, physical lifestyle changes and dietary interventions at this juncture.7,40

In patients presenting with stabile angina, research suggests a reproducible benefit of meditation on exercise duration and total possible workload.41–43 However, as those findings rely on a purely subjective perception of participants, literature lacks a more objectifiable study design including evaluation of myocardial ischaemia by cardiac imaging or cardiac biomarkers. Considering such study designs, Dal Lin et al. investigated the impact of meditation on markers of inflammation and echocardiographic findings in patients after myocardial infarction. As the first investigation on this specific topic using objectifiable endpoints, they observed a decrease in the inflammatory burden and improvements in various echocardiographic measures, such as stroke volume, in the meditation intervention group.44

Evidence of the effects of meditation on factors of the metabolic syndrome is scarce.45 There are reports of an intervention of meditation leading to improved insulin resistance and possible links to reduced expression of genes linked to general inflammatory response.46 Similar reports cover an enhanced expression of genes associated with mitochondrial function and insulin secretion after a meditation intervention.47 However, based on limited data and diverging results on this issue, no clear conclusions can be drawn.

In an investigation by Castillo-Richmond et al., atherosclerosis progression – measured by carotid intima thickness via ultrasound – was reported to possibly be reduced by a meditation programme.7,48 Endothelial function itself – measured by evaluating brachial artery endothelial vasomotor response – has not yet been shown to be effectively influenced my meditation.46,49

In terms of the effect of meditation on the primary prevention of cardiovascular risk, considerable heterogeneity between investigations and overall small sample sizes of various available data prevent profound conclusions on this topic.7,50 Moreover, the overall quality and power of studies investigating the relationship of meditation and secondary prevention of cardiovascular disease remain considerably low. The potential benefits of an intervention such as a meditation programme on quality of life or blood pressure as endpoints, suggesting a reduction of general cardiovascular risk, must be further researched.7,49,51

Available data suggest a potential influence of meditation interventions on various factors of cardiovascular disease. However, many methodological issues have been raised in the past, and future research on this topic must strive for large, randomised trials with sufficient follow-up periods. The investigators’ bias of enthusiasm or even a positive predisposition towards meditation or alternative medical methods in general must be eliminated from further studies.7,52 The heterogenous data may be explained by the different impact of the variously described meditation techniques, which additionally poses a field of interest for future research.53 In clinical practice, meditation as an intervention may be suggested to patients at cardiovascular risk in addition to conservative treatment protocols because of its non-invasive and cost-effective nature. In particular, as recommended by the European Society of Cardiology, treating psychosocial factors can counteract stress, depression and anxiety, and therefore facilitate behaviour change and improve general quality of life.54,55 The link between meditation and cardiovascular health may yet have to be scientifically confirmed, but to mentally engage with the body might be a first step towards a more individualised way of modern medicine.

Quintessence of this Expert Opinion