Are low doses of direct-acting oral anticoagulants justified and appropriate in patients with nonvalvular atrial fibrillation?

The four pivotal NOAC trials in patients with AF had very important differences in design, doses, population and results (see Table 1). Importantly, in the three trials comparing rivaroxaban (Rivaroxaban Once Daily Oral Direct Factor Xa Inhibition Compared with Vitamin K Antagonism for Prevention of Stroke and Embolism Trial in Atrial Fibrillation: ROCKET-AF), apixaban (Apixaban for Reduction in Stroke and Other Thromboembolic Events in Atrial Fibrillation: ARISTOTLE) and edoxaban (Effective Anticoagulation with Factor Xa Next Generation in Atrial Fibrillation: ENGAGE-AF) with warfarin, different subgroups of patients received reduced doses of NOACs. In ROCKET-AF, the dose of rivaroxaban was reduced from 20 mg/d to 15 mg/d (a 25 % reduction) in patients with low creatinine clearance (30–49 mL/min).2 In ARISTOTLE, the dose of apixaban was reduced from 5 mg/12h to 2.5 mg/12h (a 50 % reduction) in patients with two or more of the following risk factors: age >80 years, weight <60 kg and serum creatinine >1.5 mg/ dL.3 ENGAGE-AF had three treatment arms: patients were randomised to receive warfarin or 60 mg/d edoxaban or 30 mg/d edoxaban, but the doses of NOAC were halved in patients with low creatinine clearance (30–50 mL/min), weight <60 kg or concomitant use of verapamil, quinidine or dronedarone, and the dose reduction could be reverted if its cause was transitory.4 Thus, except in ENGAGE-AF, the doses of NOACs were adjusted at baseline in relation to patient characteristics and could not be modified thereafter.

Unlike these three trials that compared the overall results of NOACs versus warfarin in mixed populations receiving full or reduced (between 25 % and 50 % reduction) NOAC doses, the Randomised Evaluation of Long Term Anticoagulant Therapy (RE-LY) trial established three arms of similar size (each containing >6,000 patients) with enough statistical power to evaluate the noninferiority of each dose of dabigatran (150 mg/12h or 110 mg/12h) versus warfarin for preventing stroke and systemic embolism in nonvalvular AF.1 In this trial, the doses of dabigatran were maintained during the follow-up period. Thus, in the RE-LY trial all patients randomised to either dose of dabigatran received the full dose, whereas in the ROCKET-AF, ARISTOTLE and ENGAGE-AF trials, the dose of the NOAC was reduced at baseline (after randomisation) in 20.7 %, 4.7 % and 25.4 % of patients, respectively.

Since their approval, the NOACs’ advantages over warfarin have been reaffirmed in clinical praxis in diverse populations where confounding factors (e.g. concomitant drugs or diseases) may be present or patients might not follow the prescribed treatment.9–11 Subgroup analyses of lowdose regimens in the pivotal studies of NOACs in nonvalvular AF revealed no alert signs (clear differences in thromboembolic risk) versus the higher dose (non-significant interaction p-value).1–4 Nevertheless, physicians should be aware that only limited numbers of patients received the reduced doses of rivaroxaban, apixaban and edoxaban in the pivotal studies, and there was not enough statistical power to specifically compare the low doses against warfarin. Thus, the benefits of a very conservative approach with a low-dose NOAC to avoid bleeding must be carefully weighed against the risk of the thromboembolic complications of AF posed by inappropriately reduced doses of the NOAC. Reduced doses of NOACs are often prescribed in patients who do not meet the recommended criteria for dose adjustment.12 In addition to this, “good” renal function (creatinine clearance >80 mL/min) might decrease the efficacy of apixaban and edoxaban (but not rivaroxaban or dabigatran) in preventing a first ischaemic stroke (US Food and Drug Administration communication).13 Paradoxically, oral anticoagulants are particularly underused in patients with a high risk of stroke.14 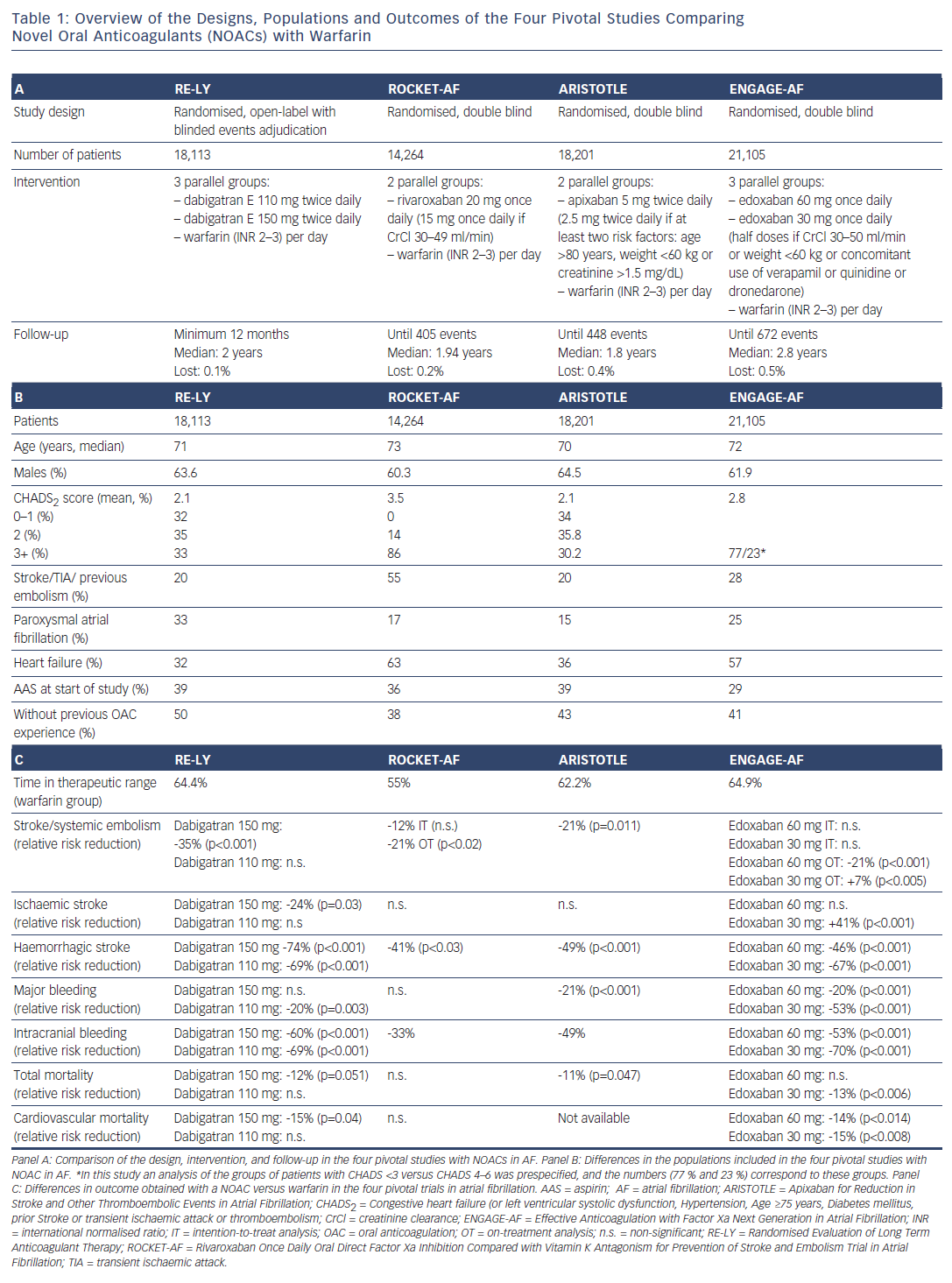 Recently, Fay et al.15 presented data on the dosing patterns of NOACs for AF from more than 4,600 physicians’ prescriptions in France, Germany and the UK between January 2015 and November 2015. They reported that whereas only 4.7 % of the patients in the ARISTOTLE trial received the low dose of apixaban, in clinical practice 44 % of patients received the low dose. Similarly, whereas 49.7 % of the patients randomised to dabigatran in the RE-LY trial received only 110 mg dabigatran twice daily, in clinical practice 59.8 % received this dose and 2.9 % received only 75 mg twice daily; and whereas 20.7 % of patients in the ROCKET-AF trial received 15 mg/d of rivaroxaban, in clinical practice 32.4 % received this dose and 4 % received only 10 mg/d. These data point to the danger that the NOACs’ excellent results in preventing thromboembolic and haemorrhagic complications in nonvalvular AF observed during the pivotal studies1–4 could be distorted in clinical praxis if the doses are too low. This seems particularly important with apixaban and edoxaban, because the recommended reduced dose is only 50 % of the standard dose. Specific reversal agents for dabigatran16 and for anti-Xa anticoagulants (apixaban, edoxaban, and rivaroxaban)17 have been clinically evaluated, and the reversal agent for dabigatran (idarucizumab) is available in some countries.16 Although it is crucial to avoid bleeding complications – and low-dose anticoagulant regimens might very well achieve this objective – it is also crucial to avoid thromboembolic events, and the risks and benefits of using low doses must be carefully counterweighed in each individual patient.18–20

In summary, low-dose NOACs are justified in patients who present a high risk of bleeding for any reason. However, the reduction in haemorrhagic risk comes at the cost of lower antithrombotic protection. Moreover, strong evidence for a low fixed dose of NOAC only exists for dabigatran (110 mg twice daily). Patients must therefore be carefully evaluated before being prescribed low-dose NOACs and re-evaluated during the follow-up. Inappropriate application of low-dose NOAC regimens will probably lead to worse thromboembolic results than those observed in the large randomised clinical trials and will likely compromise patient safety. As is true for all drug classes, clinicians need to be educated in all aspects of NOAC treatment, from choosing the most appropriate drug and dose to managing possible complications.