Diabetes mellitus is one of the most common diseases to plague the present day. Sixty percent of mortality in diabetic patients is caused by coronary artery disease. Numerous studies have shown that improving glycaemic control helps manage microvascular complications. On the other hand, some studies have shed light on the fact that a too tight glycaemic control can have adverse effects, especially on patients with high cardiovascular risk. Thus ‘the lower the better’ attitude should be exchanged for ‘the earliest the best’ attitude. A multidisciplinary approach should therefore be undertaken in order to achieve a proper management of the cardiovascular risk for diabetic patients. This includes using hypoglycaemic agents, antihypertensive medication and statins to balance the myriad of cardiovascular risk factors.

The increasing worldwide prevalence of diabetes mellitus (DM) means almost 360 million people are suffering from this disease (in 2011) and it is estimated to reach 552 million people by 2030.1 The latest European Action on Secondary Prevention by Intervention to Reduce Events (EuroASPIRE) study (2013) has revealed that the mean prevalence of DM in European patients with coronary artery disease (CAD) is around 38 %, with Cyprus leading the way with 55 % and Russia coming last with 27 %.2 Morbidity and mortality from cardiovascular disease is 2–5 times higher in patients with DM compared with the general population, and diabetes provides a two-fold increase of risk of other vascular diseases independent of other risk factors.3

Multiple studies have shown that hyperglycaemia is associated with an increased risk for coronary heart disease as well as atherosclerotic disease. This is true both for diabetic patients and those with impaired glucose tolerance, although the risk varies between 2–4 times in diabetic patients and 1.5 times for patients with impaired glucose tolerance. Whether impaired fasting glucose also carries additional risk is controversial. Glycaemic control therefore appears to be of utter importance especially since just half of the European patients with CAD screened by EuroASPIRE IV attained a <7.0 % glycated haemoglobin (HbA1c) and only 35 % of them scored <6.5 %.2 Based on the results of several studies, a HbA1c reduction of ~1 % is associated with 15 % relative risk reduction in non-fatal myocardial infarction but without benefits on stroke or all-cause mortality.4 A HbA1c <7.0 % target was shown to reduce microvascular disease but has yet to prove a major benefit on macrovascular risk. Tight glycaemic control exerts a favourable effect on cardiovascular diseases, which is visible only after many years. However, a combination of glucose control with lipid-lowering medication and antihypertensive medication leads to an improvement in the rate of cardiovascular events.1 Moreover, although the remaining normoglycaemic population appears to be larger than previously recorded by the EuroASPIRE III trial (33.7 versus 29.5 %), the prevalence of DM has increased from 23.5 % to 26.8 %, not counting the newly diagnosed cases (13.4 %). This was probably owing to the decrease in the population with impaired fasting glucose and impaired glucose tolerance who have likely developed DM between the two EuroASPIRE trials.2 Yet, as crucial as glycaemic control is, just half of the European population is aware of their glucose levels, ranging from 96 % in Slovenia to 8 % in Belgium.2 This attitude should be changed since successful glucoselowering therapy is most efficient when supported by self-monitoring of blood glucose.

However, macrovascular complications gradually emerge long before the actual diagnosis of DM occurs, due to impaired glucose tolerance characterised by long-standing insulin resistance, compensatory hyperinsulinaemia and varying degrees of elevated plasma glucose, which lead in the end to the onset of DM. This process is identified by the development of an atherosclerotic plaque, which in the presence of enhanced inflammatory content becomes unstable and prone to rupture. Atheroma from patients with DM has more lipid, inflammatory changes and thrombus than a normal subject.1 By contrast, microvascular complications slowly begin to unfold only after the onset of clinical diabetes. Two important trials, Diabetes Control and Complication Trial (DCCT) and United Kingdom Prospective Diabetes Study (UKPDS), have demonstrated the continuous relationship between the increase of HbA1c and microvascular complications, without an apparent threshold.5 Conversely, a decrease by 2 % in HbA1c significantly lowers the risk of developing nephropathy and retinopathy in DM type 1.6 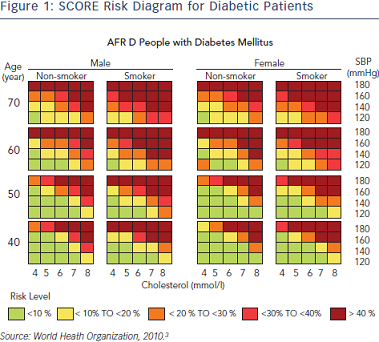 Download original
Assessing cardiovascular risk in patients with DM can be achieved through various methods, one of the most popular being the Systematic Coronary Risk Evaluation (SCORE) risk diagrams. According to these, DM or chronic kidney disease, or very elevated cholesterol or blood pressure places the patient at a high risk (5–10 %) of developing a fatal cardiovascular event in the next ten years (see Figure 1).

On the other hand, assessing the risk of type 2 DM can be conducted using the Finnish Diabetes Risk Score (FINDRISC) questionnaire, which addresses the risk of developing type 2 DM in the next ten years, by dividing it in low, moderate, high and very high risk.

CAD accounts for over 60 % mortality in people with DM, more than twice the non-diabetic population, while impaired glucose metabolism, comprising of impaired fasting glycaemia and impaired glucose tolerance, is also linked to CAD – since moderately elevated glucose levels below the threshold for DM also represent an increased risk.7 Moreover, established DM is associated with impaired prognosis after myocardial infarction.8 The Euro Heart Survey programme carried out a study on diabetes and the heart, trying to assess the prevalence of DM and impaired glucose regulation in adult patients with CAD, and to compare diagnostic and therapeutic tools suitable for these patients.9 In their 4,961 cohort of people from 110 European countries admitted with CAD, only 29 % with acute CAD and 34 % with stable CAD were normoglycaemic, thereby concluding that it was unusual to have normal glucose tolerance in patients with CAD.9 The results from the Euro Heart Survey showed that out of the population classified as normoglycaemic by the WHO criteria of 1999 (fasting plasma glucose <6.1 mmol/L), when performed an oral glucose tolerance test, 27 % of these patients proved to have impaired glucose tolerance and 8 % diabetes. Five percent of the group with impaired fasting glucose proved to have actual diabetes. Judging by the American Diabetes Association (ADA) criteria of 2003 (fasting plasma glucose <5.6 mmol/L), 21 % of the normoglycaemic patients were discovered to have impaired glucose tolerance, while 5 % diabetes.9 However, abnormal glucose tolerance seems to be quite common in the general population, as a study on the Australian population aged 65 discovered similar results, 8 % having undiagnosed diabetes and 25 % impaired glucose metabolism.10 While this conclusion appears to be true, it also suggests that it is more common in people with CAD and that an oral glucose tolerance test should be performed on a routine basis for such patients, as fasting glycaemia proves to be insufficient.9

An international expert committee issued a report in 2009 on the role of HbA1c in diagnosing diabetes and concluded that HbA1c between 5.7 % and 6.5 % places the patient at high-risk for developing diabetes, while values over 6.5 % signify undiagnosed diabetes.11

A statistic concerning the mortality rate among the diabetic population places cardiovascular disease in the top leading causes of death. Therefore, ischaemic heart disease is by far the most important cause of death for patients with type 2 DM followed by other heart diseases and stroke, while diabetes itself comes in fourth.12

UKPDS, a landmark study with a major impact on clinical care, showed that in newly diagnosed patients with type 2 DM, intensive glucoselowering therapy reduced the risk for clinically important diabeticrelated endpoints. Although mortality and cardiovascular events were not reduced in the main trial, important benefits emerged during a 10-year post-trial monitoring, including a 24 % reduction in microvascular disease, a 15 % reduction in myocardial infarction and lower mortality.13 The most controversial of recent trials is the Action to Control Cardiovascular Risk in Diabetes (ACCORD) trial, which tested the hypothesis that when compared with conventional therapy, normalising glucose levels (target HbA1c 6.0 %) would reduce incident cardiovascular death or events in high-risk patients with type 2 DM.14 After 3.5 years, the trial was stopped prematurely because of a 22 % higher mortality in the intensive therapy group.

With regard to the hospitalisation costs of diabetic patients, cardiovascular disease accounts for more than 60 % of total costs, while renal disease, neurological disease and peripheral arterial disease accounts for around 10 %, placing prevention of cardiovascular disease among the top priorities for diabetic patients.15 Therefore, a multifactorial approach should be taken into consideration for an effective risk reduction. This includes glucose control, blood pressure control, lipid control, antithrombotic agents, diet and physical activity for an adequate management of the micro- and macrovascular complications.16 Since type 2 DM is in fact a cardiometabolic disease, the treatment goals are multifactorial. Thus, the aim for HbA1c should be lower than 7 %, while still avoiding hypoglycaemia, blood pressure <140/85 mmHg, low density lipoprotein (LDL) -cholesterol <70 mg/dL and diet controlled weight reduction.1 In order to achieve these goals, hypoglycaemic agents will be necessary besides diet control, and metformin can be used as a first-line agent in patients who do not have renal insufficiency, liver disease or hypoxia.3 Evidence for this indication arises from a Cochrane review of randomised controlled trials and the much feared side effect of lactic acidosis proved to be low and no higher than with other hypoglycaemic agents. However, the review was not able to assess the risk of lactic acidosis in the presence of hypoxic co-conditions, so more research should be undertaken on this population.3 In a subgroup of overweight patients randomised to metformin or conventional therapy in the UKPDS trial, metformin reduced the risk for any diabetesrelated endpoint, myocardial infarction and all-cause mortality by approximately one-third; benefits which remained during 10 years of monitoring.17 Sulphonylurea can be used for patients who have contraindications to metformin or in whom metformin was not able to control their glycaemia. The guidelines advise that in patients with fasting plasma glucose >14 mmol/L despite maximal treatment with metformin and sulphonylurea should be referred to the next level of care.3 Several other hypoglycaemic drugs are commonly employed for diabetes but lack enough data to recommend their use as treatments to reduce cardiovascular events.18 Acarbose, an alpha-glucosidase inhibitor, reduced the rate of myocardial infarction by 91 % and a composite of cardiovascular events by 49 % in patients with impaired glucose tolerance in the Study to Prevent Non-Insulin-Dependent Diabetes Mellitus (STOP-NIDDM) trial.19 However, cardiovascular risk reduction with acarbose has not been reported in diabetes. Neither incretin mimetics, dipeptidyl peptidase IV (DPP IV) nor sodium-glucose co-transporter 2 (SGLT2) inhibitors have thus far (in clinical trial data) demonstrated cardiovascular event reduction.18

Lowering blood pressure in diabetic patients reduces the risk of micro- and macrovascular complications. Low-dose thiazides/ angiotensin-converting enzyme (ACE) inhibitors are recommended as first-line treatment of hypertension in diabetic patients, and they can be combined. Beta-blockers are not recommended for initial management of hypertension in patients with DM, but can be used if thiazides or ACE inhibitors are contraindicated.3

Due to the fact that microvascular disease develops later in the progress of diabetes and is a direct manifestation of glucose toxicity, tight glycaemic control improves the outcome. By contrast, macrovascular disease can unfold up to 15 years prior to the diagnosis of DM and with HbA1c much lower than expected, increasing the risk of complications. Furthermore, epidemiological studies have shown that tight glycaemic control can in fact pose risks of a cardiovascular nature to individuals with high cardiovascular risk factors, possibly through pathological hypoglycaemic events. Therefore, further research into the effects of micro- and macrovascular complications is rendered necessary.21

It could be said that lower is not always better when it comes to HbA1c levels but that the earliest is the best concerning the management of DM and cardiovascular risks. Prevention of cardiovascular disease should be based on total cardiovascular risk, and since DM is an independent risk factor by itself, a need for an interdisciplinary approach, such as between the cardiologist and the diabetologist, arises.