Non-antivitamin K oral anticoagulants (NOACs) have recently emerged as a new class of antithrombotic drugs. Four large-scale, randomised controlled trials (RCT) accredited dabigatran, rivaroxaban and edoxaban with evident advantages for stroke prevention in atrial fibrillation (AF) compared with warfarin. The superiority concerns not only the manageability but also the antithrombotic efficacy and safety. Aspects of real-life clinical experience with NOAC for stroke prevention in AF are analysed in an attempt to underline some practical differences. If at present the individualisation of the NOAC class drugs is still a subject of debate it is probable that in the near future we will be able to adapt the drug and dosages to individual patient’s profile.

Non-antivitamin K oral anticoagulants (NOACs) are no longer ‘new’ drugs: they already are established. Since randomised controlled trials (RCTs) usually enrol highly selected patient populations, the best way to demonstrate new drug efficiency/cost-effectiveness is to use long-term and ‘real-world’ data. In order to understand the NOAC experience in real life properly, one must first understand how the substrate for such therapy was modified, i.e. what is the awareness and attitude towards stroke prevention in atrial fibfrillation (AF) in everyday clinical practice. Several important registries, 1–4 with different collection designs, have demonstrated that despite the considerable increase in the awareness of AF-related risk of stroke in the last years, the percentage of undertreated patients remains high. This also includes the AF patients with lower risk (CHA 2 DS 2 VASc score of one in men and two in women) who also require anticoagulant therapy. 5 There is also a percentage of over-treated patients (CHA 2 DS 2 VASc of 0) and an excess of aspirin use despite of the demonstrated lack of preventive effect of this drug in AF 6 and increased bleeding risk when associated to oral antivitamin K anticoagulants (AVKs) or NOACs. A third conclusion is that despite an increase of worldwide approval of NOAC they are still underused. RELY-ABLE study was an open-label prolongation of the RE-LY study with a 28-month extension of the parent study follow-up beyond 4 years of ongoing treatment. The results were consistent with those of RE-LY with an impressive low rate of intracerebral bleeding that was sustained throughout the study. 7 XANTUS was a prospective, single-arm, observational, non-interventional phase IV study intended to collect real-world data on adverse events in patients with non-valvular AF treated with rivaroxaban and to determine the safety profile of rivaroxaban across the broad range of patient risk profiles encountered in routine clinical practice. 8 Again the stroke and bleeding rates were low in patients treated with NOAC. An interesting post-hoc pooled analysis of the RE-LY study according to the European label recommendations failed to demonstrate a difference compared with the original RE-LY study. 9 An extensive real-life analysis included 134,414 elderly patients treated with 2 dosages of dabigatran (150 mg and 75 mg – not approved in Europe) and warfarin and collected 2,715 events. The results confirmed global risk benefit observed in RE-LY (20 % reduction in stroke and 66 % reduction in devastating intracerebral haemorrhage compared with warfarin) but also confirmed the slight increase in gastrointestinal haemorrhage. 10 A somewhat similar pharmacovigilance study conducted by the US Department of Defense electronic healthcare records that included 27,467 real-life patients treated with rivaroxaban confirmed the low rate of bleeding observed in ROCKET-AF. 11 Adherence to therapy is a very important target in considering NOACs if we need to translate effective therapies in effective disease management in patients and diseases where persistence to warfarin therapy is suboptimal. A once-daily regimen could be an advantage in this regard as demonstrated by several studies, 12,13 which highlight the superiority of rivaroxaban compared with warfarin, dabigatran and apixaban. However, in the case of NOAC the rhythmicity of drug administration could have apparent paradoxical implications. The explanation of this paradox is the relatively short half-life of NOAC. When the drug is administered twice daily (bid), the drug concentration inside the therapeutical interval is more constant with lower trough to peak rate than in the once-daily (od) regimen. This implies that missing one dose (which could happen quite often in real life) of an od regimen will lead to a similar lowering in plasma drug exposure as missing three consecutive doses in a bid regimen, which is less likely in real life 14 (see Figure 1 )

This apparent paradox caused by a greater continuity of drug action in a bid regimen could be the basis of a greater need of persistence required for the od than for bid regimen. 15

A challenge for future research is that currently there is no approved test to guide therapeutical decisions and the routine coagulation monitoring is not mandatory for NOACs. However, in special circumstances (emergent surgery, thrombolysis indication for stroke, haemorrhagic complications, etc.) the clinician needs an informative test. Currently available tests have variable impact depending on NOAC. 16–18 For dabigatran, the prothrombin time (PT) is too insensitive, the thrombin time (TT) is too sensitive and the activated partial thromboplastin time (aPTT) is prolonged under dabigatran, but the relation is curvilinear and reagent-dependent. The diluted thrombin time (Hemoclot) and the ecarin clotting time (ECT) are more suitable but unfortunately with reduced availability. For practical purposes, the most commonly used is the aPTT: a prolonged aPTT indicates that the patient is within therapeutical dabigatran concentration. For rivaroxaban and apixaban the situation is more difficult. The direct anti-Xa activity assay is consistent with plasma concentration, but the test is not widely available. The PT has some sensitivity for rivaroxaban but not for apixaban (see Table 1 )

The lack of an antidote to NOACs has been a major concern in the debates about their use in clinical practice. Most often, bleeding due to NOAC is mild to moderate and responds to the usual supportive or anti-hemorrhagic management treatment as with warfarin, for which the ‘antidote’ – intravenous vitamin K is far from ideal. Nonetheless, the antidote matter has a clear clinical relevance when dealing with severe haemorrhage or during emergent surgery. A solution to the problem seems to offer the humanised monoclonal antibody fragment (idarucizumab) with has much higher binding affinity to thrombin than dabigatran, no procoagulant or anticoagulant effect and rapid onset of action. The product is already available on the market as dabigatran antidote. 20 Other antidotes targeting factor X and/or other coagulation components are under advanced research.

Selecting the right NOAC for each patient

Selecting the right NOAC for the each patient is probably one of the most challenging problems of current clinical practice for prevention of embolism in AF. A complicated stochastic multi- acceptability criteria evaluation comparing the benefit–risk balance across current antithrombotic therapies in AF patients 21 revealed a net favourable profile of NOAC compared with other anti-thrombotic drugs across a wide range of assumptions regarding the relative importance of clinical events. In clinical practice it seems that the preference for one NOAC or another is actually mainly based on the perceived relative importance of clinical profile of the patient. There have been several attempts to individualise NOAC therapy based on pharmacological criteria, 22 accumulated real-life experience, RCT results or Summary of Product Characteristics (SmPC) descriptions. However, so far no single approach has been validated for practice and presently the best approach seems to be balanced between current knowledge summarised in the available guidelines, 19 doctor’s experience and the clinical profile and preference of the patient. 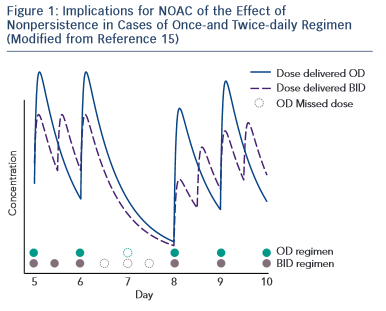 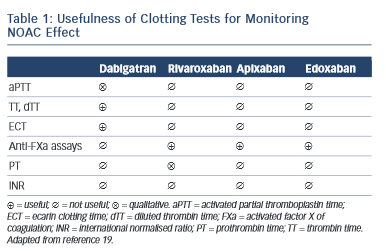 NOAC represents one of the most important drug discoveries of the new century. These drugs are the result of a new understanding of the treatment of pathological coagulation because, unlike AVK, they target the critical molecules of the coagulation mechanism and not coagulation as a whole. Their development is a result of both the success as well as the limitations of a half a century of treatment with AVK. As a class, NOAC proved to be superior to warfarin for stroke prevention in AF both as anti-embolic efficacy and safety, mainly in terms of major bleeding and especially intracerebral bleeding. NOACs represent palpable progress in the management of AF patients at risk of stroke and effort should be made to implement this therapy in daily practice. However, it should be emphasised that a ‘class’ is only a necessary simplification in the history of a new drug molecule. The pharmacological profile of molecules is as different as the physiological implication of their specific target. Only a better understanding of both components in relation to the clinical profile of the patient would enable us to pinpoint a specific molecule in a specific dosage for a specific patient. When first introduced in practice, one of the main advantages of NOAC was a simplified therapy with few dosages and no need for coagulation monitoring after the model of ‘one fits all’. Available data do not allow us yet to fully individualise NOAC members and dosages for the vast spectrum of all patients but the expectations are at the horizon. As UK Prime Minister Winston Churchill said: ‘ This is not the end. It is not even the beginning of the end. But it is perhaps the end of the beginning. ’