Some patients treated with dual antiplatelet therapy (DAPT) following acute coronary syndrome (ACS) can still exhibit heightened residual platelet reactivity (HRPR), which is potentially linked to adverse vascular outcomes. Better tailored DAPT strategies are needed to address this medical need. Aim: To assess the cost-effectiveness of guided DAPT with clopidogrel or ticagrelor in addition to aspirin when using VerifyNow P2Y12 testing in post-ACS patients. Methods: The costs were calculated per 1,000 patients aged >55 years. It was assumed that all patients received either generic clopidogrel or ticagrelor for 1 year, and underwent VerifyNow P2Y12 assay testing before DAPT maintenance. Results: Guided DAPT will prevent five more MIs and six more deaths per 1,000 patients than a standard prescription of generic clopidogrel. The total predictive value of costs per patient is 32% lower if a guided strategy is used than if ticagrelor is given to all patients. Conclusion: Assessment of heightened residual platelet reactivity with P2Y12 assay in triaging DAPT post-ACS patients for 1 year is a cost-effective strategy that would reduce financial burden compared to routine administration of more expensive antiplatelet agents.

Prasugrel is not marketed in Russia, so high-risk patients have been given ticagrelor. The proportion of generic clopidogrel administered has been steadily rising, with the average cost of treatment decreasing annually by 16–17% (Table 1). However, a considerable number of patients on clopidogrel have high residual platelet reactivity (HRPR), potentially leading to inadequate protection and an excess of thrombotic events.3–6 It seems reasonable to switch those patients exhibiting HRPR to ticagrelor. Since the cost of ticagrelor is significantly higher than that of generic clopidogrel, assessing platelet reactivity with the VerifyNow P2Y12 assay may optimise the care of post-ACS patients by identifying those with HRPR, who may benefit from ticagrelor.7

This study’s objective was to evaluate cost-effectiveness of guided DAPT with clopidogrel or ticagrelor with aspirin in patients after ACS in Russia. To identify which patients would benefit from ticagrelor we used the VerifyNow P2Y12 assay to test platelet reactivity.

A two-step simulation analysis was carried out by extrapolating the TreeAge™ Pro software program algorithm into the Russian healthcare system, based on the results of the PLATelet Inhibition and Patient Outcomes (PLATO) trial.8 The index modelling was 5 years. The average age of patients starting therapy was 55 years. The model included a decision tree to assess the costs and clinical effectiveness of therapy for 1 year after ACS, after which patients entered the Markov model, whereby the outcomes of therapy were analysed over the next 4 years.

For this modelling, we applied conventional daily doses of clopidogrel (75 mg), or ticagrelor (180 mg), both on top of aspirin (100 mg). The magnitude of platelet inhibition was consistent with clinical trial data.8–10 We deliberately avoided loading antiplatelet strategies, focusing exclusively on maintenance regimen modelling. It was assumed that effectiveness and safety in patients with high reactivity of platelets were comparable to those observed in the Clopidogrel in Unstable Angina to Prevent Recurrent Events (CURE) trial.11

ACS may cause a temporary increase in HRPR. Therefore, it was assumed in the simulation that the incidence of HRPR in ACS patients would be 13%.8.9,12 However, since a PRU test is usually performed during admission for ACS, it was estimated that 32% of patients would receive ticagrelor.10 It was expected that, after 1 year, all patients would discontinue DAPT, and be denied the additional therapeutic effect of these drugs thereafter. The incidence of non-fatal MI and non-fatal stroke, starting from the second year, was consistent with published epidemiological data.13,14 Mortality of patients was calculated on the basis of epidemiological data for Russia, with relative risk adjustments made for various cardiovascular events.15 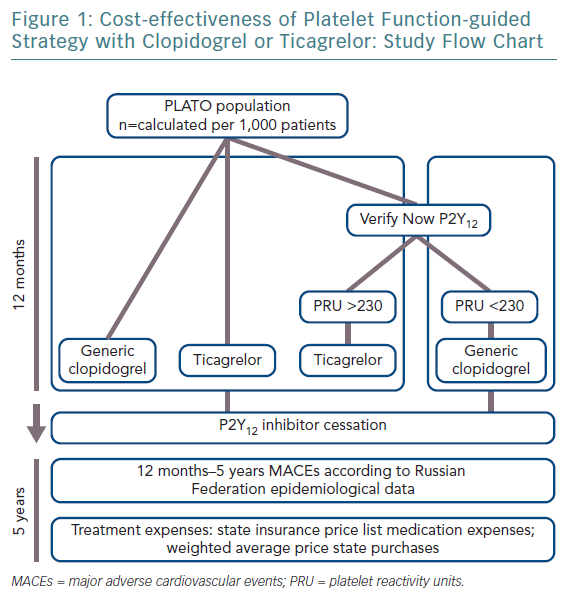 Costs for stroke treatment were calculated on the basis of compulsory medical insurance tariffs in St Petersburg for 2014, with consideration for severity of the disease in the Russian population (minor stroke, modified Rankin scale [mRS] 0–2: 51%; moderate stroke, mRS 3-4: 19%; severe stroke, mRS 5: 1%; fatal stroke: 29%). This totalled US$1,468.16,17 Death in the acute phase of MI was 16%, in line with Russian national statistics, and stroke death was 29%.17–19 Costs for treatment of non-fatal MI, taking into account the early rehabilitation period, were US$2,440, while the average cost for bleeding events amounted to US$245.

The impact of cardiovascular events on quality of life was set from published reports.20,21 The cost and life expectancy were discounted at 3.5% per year. With regards to cost-effectiveness, WHO recommendations applied. In short, an acceptable level of additional costs per 1 year of life with consideration for quality (quality-adjusted life year [QALY]) should not exceed three times the gross domestic product (GDP) per capita.22,23 When the value of additional costs per 1 QALY does not exceed national GDP per capita, the proposed intervention is considered to be economically highly effective and should be widely used in clinical practice. The study design is shown in Figure 1 and main modelling parameters in Table 2.

Providing early, guided DAPT will prevent five MIs and six deaths per 1,000 patients compared to uniform prescription of generic clopidogrel (Table 3). The costs per one additional year of survival with a tailored strategy (US$12,550) was only slightly higher (US$12,440) than when taking the uniform approach. The costs for one additional QALY were US$14,460, and US$16,993 respectively. The total predictive value of costs per patient was 32% lower with guided strategy than with uniformed ticagrelor in all patients. Blindly prescribing ticagrelor without a platelet test increases the affiliated cost more than twice compared to generic clopidogrel. Since the GDP per capita for Russia in 2013 was US$15,500, performing a PRU test in patients post ACS and prescribing DAPT, dependent on the assay results, can be considered as a highly effective economic strategy (Table 4).

This analysis revealed that assessment of HRPR with P2Y12 assay in triaging DAPT for post-ACS patients for 1 year is a cost-effective strategy, with a lower financial burden than the routine administration of more expensive antiplatelet agents. This is important since inexpensive generic clopidogrel, including local formulations, are consistently growing and dominate Russian pharmaceutical market. In contrast, branded ticagrelor cost about six times more, so would incur an obvious financial burden.

There are certain limitations. Firstly, many considerations are based on the results of the PLATO trial. Since low-risk patients and medically managed patients were not included in our model, economic considerations may be attributed to ST-segment elevation ACS only if they were planned to undergo primary percutaneous coronary intervention. Therefore, it is difficult to apply this model to the entire ACS cohort. 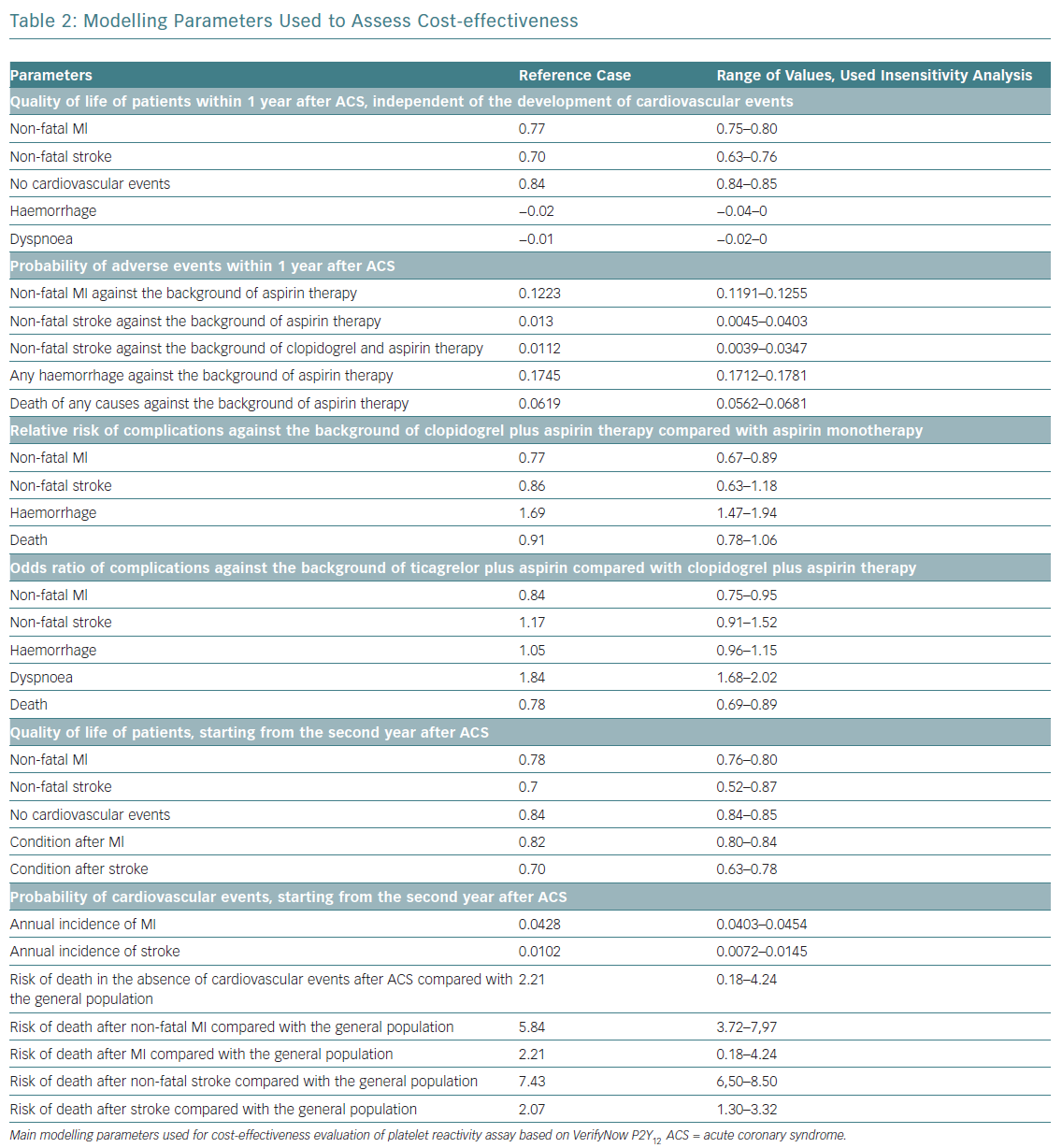 In addition, some randomised evidence, in particular the negative Assessment by a Double Randomization of a Conventional Antiplatelet Strategy versus a Monitoring-guided Strategy for Drug-Eluting Stent Implantation and of Treatment Interruption versus Continuation One Year after Stenting (ARCTIC) trial, did not include the benefits of monitoring HRPR during DAPT and to guide dosing strategy.24

Another shortcoming is that the current analysis covered generic clopidogrel, specifically the Russian pharmaceutical market, while branded clopidogrel was used in PLATO.

Within the Russian healthcare system assessment of platelet reactivity with VerifyNow P2Y12 assay in patients with ACS followed by DAPT modification is a more cost-effective approach to reducing treatment costs then the routine use of newer antiplatelet agents.