MI with non-obstructive coronary arteries (MINOCA) is an enigma that is being increasingly recognised with the frequent use of angiography following acute MI. To diagnose this condition, it is important to determine the multiple potential underlying mechanisms that may be responsible, many of which require different treatments. This review evaluates the contemporary diagnosis and management of MINOCA.

Early coronary angiography performed during acute MI (AMI) identifies an occluded vessel in most patients with ST elevation MI (STEMI)1 and less frequently in those with non-STEMI;2 however, ≥90 % of patients with AMI have evidence of obstructive coronary artery disease.3 For these patients with overt coronary artery disease (CAD), the benefits of reperfusion strategies and cardioprotective therapies are well established and appropriate considering the documented atherothrombotic process involved. However, in up to 10 % of patients with clinical diagnostic features of AMI, early angiography does not reveal an occluded vessel or possibly any evidence of CAD.3 These patients constitute an intriguing subgroup referred to as MI with non-obstructive coronary arteries (MINOCA),4 which present a diagnostic and therapeutic conundrum to clinicians as prospective studies evaluating these patients are limited. This review evaluates the contemporary diagnosis and management of MINOCA.

The diagnosis of MINOCA requires: (1) clinical documentation of a myocardial infarct, (2) the exclusion of obstructive CAD and (3) no overt cause for the AMI presentation, such as cardiac trauma (Table 1). Accordingly, the diagnosis is usually made following invasive coronary angiography in the evaluation of an apparent AMI. The diagnostic criteria for AMI are universally established and focus on a significant increase in troponin levels associated with clinical markers of ischaemia.5 Conventionally, obstructive CAD is defined as an epicardial artery stenosis ≥50 %6 on angiography, thus a stenosis <50 % is required for the diagnosis of MINOCA.

Although the diagnostic criteria for MINOCA are specific, it should not be considered a final diagnosis but a ‘working diagnosis’ whose underlying aetiology requires further evaluation. This is similar to the diagnosis of heart failure, where the aetiology responsible needs to be determined rather than just demonstration of ventricular dysfunction.

The mechanism responsible for AMI involves an interaction between atheroma, thrombosis and vascular dysfunction. Given the limited burden of atherosclerosis in MINOCA, it would be expected that atheroma would play a small role in the pathogenesis of the infarct; hence, the focus should be on other potential mechanisms (Table 2). Previous studies have implicated spasm,7 microvascular dysfunction8 and thrombophilic states (Factor V Leiden,9–11 protein C deficiency12 and malignancy-associated thrombophilia13). DaCosta et al. reported that a third of patients with MINOCA had evidence of coronary spasm or thrombotic disorders.10

Furthermore, non-ischaemic causes of MINOCA must also be considered. Several disorders that result in myocardial injury may mimic ischaemic MI and fulfil the universal criteria for AMI. Acute myocarditis, pulmonary embolism and some cardiomyopathies14,15 are examples of disorders that may mimic AMI. Delineating these aetiologies is paramount since it will impact on the appropriate management of these patients. 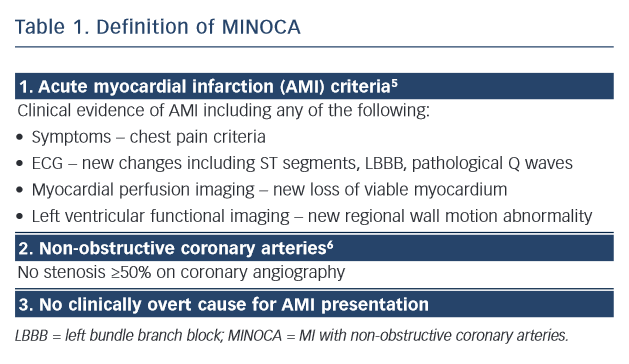 As the working diagnosis of MINOCA is typically made following coronary angiography, some clinically overt non-ischaemic causes of the apparent AMI presentation will be immediately evident. For example, direct cardiac trauma resulting in myocardial injury with associated ECG changes and increased troponin levels should not be diagnosed as MINOCA if angiography is undertaken to document the underlying coronary anatomy. Similarly, classical apical ballooning on left ventriculography with non-obstructive coronary arteries on angiography should be diagnosed as takotsubo cardiomyopathy rather than MINOCA. This exclusion of patients with overt clinical causes for their AMI presentation is consistent with the principle of MINOCA as a working diagnosis, necessitating the determination of the underlying cause.

In patients with clinical markers of an AMI in the absence of obstructive CAD and no overt underlying cause for their presentation (Table 1), a diagnosis of MINOCA should be made and the potential causes (as listed in Table 2) considered. A systematic review of the published literature comparing the clinical characteristics of AMI with and without obstructive CAD revealed that patients with MINOCA (a) tended to be younger, (b) were more frequently women, but (c) had a similar cardiovascular risk profile.4 Thus, distinguishing a patient with MINOCA from those with obstructive CAD on the basis of the clinical presentation and characteristics alone is not possible. 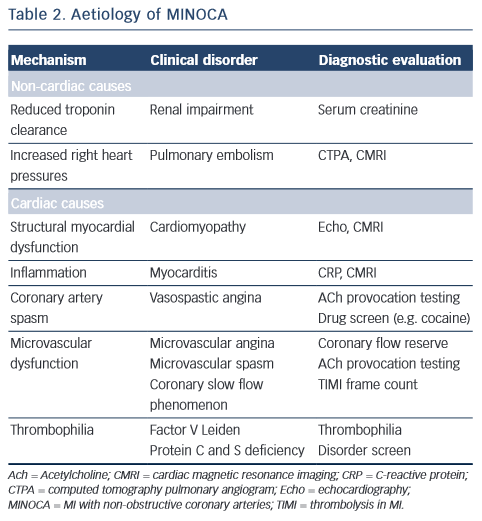 The prognosis of MINOCA is often considered benign by clinicians given the absence of obstructive CAD. However, contemporary data suggest that the prognosis is more guarded with some large studies reporting an all-cause mortality rate of 1.1–2.6 % at 30 days and 3.3–6.4 % at 12 months.13,19 Furthermore, a Korean AMI registry that evaluated 12-month all-cause mortality rates in 8,510 consecutive AMI patients reported rates of 3.1 % in those with MINOCA and 3.2 % in those with single- or double-vessel obstructive CAD.20

When using the working diagnosis of MINOCA to assess the underlying cause, the first step is to exclude non-cardiac pathology responsible for the raised troponin levels (and thus incidental nonobstructive coronaries). Examples include pulmonary embolism and renal impairment (as discussed below). Thereafter, cardiac causes should be considered, including disorders associated with: (a) structural myocardial dysfunction and (b) ischaemic myocardial damage (Table 2).

Renal impairment may be associated with elevated troponin levels due to reduced clearance.22 Thus, the diagnosis of AMI may be difficult in the presence of renal impairment, but should be distinguishable by serial measurements.

Troponin may be released (a) from dysfunctional myocardial cells in disorders associated with structural myocardial dysfunction, and/or (b) during ischaemic myocardial injury arising from coronary artery spasm, coronary microvascular dysfunction or coronary thrombosis associated with a thrombophilic disorder (Table 2). Delineating these aetiologies is important considering the different treatment approaches required for the specific diagnoses.

Cardiac MRI (CMRI) should be the initial diagnostic investigation for evaluating the cardiac causes of MINOCA. Non-contrast CMRI provides useful assessment of structural myocardial dysfunction and readily identifies cardiomyopathies, including takotsubo cardiomyopathy. Furthermore, late gadolinium enhancement images provide evidence for the diagnosis of myocarditis and subendocardial MI. In this regard, CMRI has a spatial resolution to detect a myocardial infarct zone with a mass as small as 0.16 grams.

The use of this imaging modality in MINOCA is well illustrated by Leurent et al., who performed CMRI in 107 consecutive MINOCA patients at a mean delay of 6.9 days.23 They reported the following findings with CMRI: myocarditis in 60 %, AMI in 16 %, takotsubo cardiomyopathy in 14 %, and normal findings in 10 %.

Of note, the diagnostic yield with CMRI is increased when imaging is undertaken within 7 days of presentation, as delayed imaging may result in some features no longer being evident. However, even with early imaging, 10–20 % of CMRI studies failed to identify any abnormalities despite the clinical presentation consistent with an AMI.14,23–25 Whether small infarcts may have been missed by the gadolinium enhancement CMRI remains a possibility.

Provocative spasm testing may be considered in patients with MINOCA. Studies have demonstrated a variable prevalence of inducible spasm in such patients (15–95 %).10,26 It appears to be particularly prevalent among Asian patients, with a reported frequency of 81 % in Japanese27 and 61 % in Korean28 patients with MINOCA.

Drug screening for sympathomimetic agents may be indicated in some patients, as cocaine29 and methamphetamines30,31 have been associated with MINOCA. These agents may induce coronary artery spasm via their alpha-agonist properties. Thus, evaluating the history for the use of these agents and, where appropriate, urine drug screening should be considered.

Thrombophilia disorder screening has been performed in several MINOCA studies with abnormalities detected in as many as 19 % of patients.11 Hereditary thrombophilia disorders reported in patients with MINOCA include Factor V Leiden, prothrombin variant G20210A, Factor XII deficiency and protein C and S deficiencies. Important acquired hypercoagulable states that may predispose to MINOCA include collagen vascular disorders, systemic vasculitis, systemic lupus, antiphospholipid syndrome, polycythemia vera, thrombocythaemia, and the use of anabolic steroids or oestrogens/progestins.

Identifying treatable causes of MINOCA is fundamental to its clinical assessment as these may have prognostic implications and may impact on its guarded prognosis. For example, coronary artery spasm is effectively treated with nitrates and calcium channel blockers, with use of the latter shown to be a survival determinant in patients with MINOCA.32 In addition, identification of thrombophilia disorders may influence treatment and could impact on the patient’s offspring in the case of hereditary thrombophilia.

The management of MINOCA with no specific underlying aetiology identified requires further investigation. There are no prospectively conducted studies to evaluate if conventional treatments used for AMI patients with obstructive CAD are of benefit in MINOCA. Thus, whether aspirin, statins, beta-blockers and/or angiotensin-converting enzyme inhibitors should be routinely used in patients with MINOCA is open to speculation.

MINOCA is identified using a working diagnosis made following coronary angiography in the assessment of patients with an AMI. It is imperative that the underlying aetiology responsible for the condition is closely considered and investigated. In patients in whom no specific cause is found, further studies are warranted to assess the most effective treatment.