It has been considered that an interatrial block exists when there is a delay of conduction in some part of the Bachmann’s bundle zone.1 The interatrial blocks are the most frequent and well-known blocks at atrial level. These are expressed in the electrocardiogram (ECG) by the presence of a P wave duration that equals or exceeds 120 milliseconds and presents usually a bimodal morphology, especially in leads I, II, VL or inferior leads. This represents partial IAB (P-IAB). If there is a P wave morphology ± in II, III, and VF with duration ≥120 ms, we speak about advanced interatrial block (A-IAB) (see Figure 1 )1-3 .

Which are the P wave ECG Patterns that Meet the Criteria for Interatrial Block?

The P wave ECG Pattern of Interatrial Block May be Transient

The presence of transient deterioration of interatrial conduction, that is interatrial block, of first or third degree may appear in the same ECG recording on a beat-by-beat basis or in separate recordings. The first case may be considered as a part of the concept of atrial aberrancy, a term first coined by Chung4 in 1972, similar to ventricular aberrancy (see later)2,4.

The prolonged P wave duration (P-wave duration ≥120 milliseconds) may be present in the elderly but can also be a consequence of acute illness, such as pericarditis or acute myocardial infarction without atrial enlargement (ECG pattern of partial interatrial block P-IAB). In fact, in these cases, the duration of P wave may be as long as in left atrial enlargement (LAE), but the P loop does not move so clearly backwards, as in a figure 8 shape, which results in a much smaller negative P wave component in lead V1 (see Figure 2). The combination of LAE with advanced interatrial block (A-IAB) (wide P wave ≥120 milliseconds and ± in leads,II, III, and VF) is very common but isolated cases of A-IAB may be seen. As the P wave often looks flat, to be accurate in the measurement in both types of IAB it is necessary to trace lines, as seen in Figures 4 and 6.

Interatrial Blocks May be of First, Second, and Third Degree

The interatrial blocks, by analogy with other types of block, (sinoatrial, atrioventricular, and/or bundle-branch block at the ventricular level), may be of first (partial), second (transient interatrial block is part of atrial aberrancy), or third degree (advanced).

The P wave has a normal electrical axis. The electrical impulse is conducted from the right to the LA through the normal propagation route but with a delay. The endocardial recording confirms that the coronary sinus activation time is delayed.

The ECG shows that (a) a P wave of 120 milliseconds or more, usually bimodal, is especially visible in leads I, II, or III, and (b) the P wave morphology in V1 in the absence of left atrial enlargement (LAE) presents a P wave negative mode that is less evident than in cases of LAE, because in the absence of LAE, the P loop is directed in a less backward direction (see Figures 2 and 4).

However, in the instance of P wave duration of 120 milliseconds or more the presence of LAE is common. In fact, it has been considered that the wide and bimodal P wave of LAE is better explained in terms of underlying interatrial block rather than the longer distance that the impulse has to travel7.

LAE is often found in the elderly8, in patients with heart failure9 and those with other advanced heart diseases. We also demonstrated that it is a risk marker of atrial fibrillation/atrial flutter (AF/Afl)10.

Similar to the conduction block at the level of AV junction, SA junction, or the ventricles, the interatrial block may occur transiently on a beatby- beat basis or may be recorded momentarily.

In a typical case, the morphology of the P wave may change in the same recording from interatrial block pattern (first or third degree) to normal pattern, usually transiently in relation to the preceding premature beats, before then again presenting the pattern of interatrial block. These changes may be considered as atrial aberrancy, similar to ventricular aberrancy2,4.

Atrial aberrancy may also present a transient bizarre P wave without the morphology of interatrial block. In these cases, the location of the block is usually the right atrium.

The electrical impulse is blocked especially in the upper and middle part of the interatrial septum, in the Bachmann’s bundle zone, and/or in the upper part of LA so that retrograde left atrial activation occurs mainly via muscular connections in the vicinity of coronary sinus2,3,11,12. In rare occasions, the right atrium and LA can demonstrate dissociated electrical activity.

The ECG shows that (a) P wave duration of 120 milliseconds or more and (b) the morphology of P wave are usually bimodal in lead I and biphasic [±] in leads II, III, and VF because of caudocranial activation of the LA, and also often in V1 to V3–V5 (see Figure 6).

The electrophysiological mechanism underlying this ECG pattern has been explained using deductive ECG-VCG data correlated with recordings obtained from the high and low right atrium, coronary sinus, right pulmonary artery, and oesophagus and also with electroanatomic mapping11,12(see Figures 7 and 8).

It has been also demonstrated that the block may be located in the LA not affecting conduction through the proximal Bachmann’s bundle. However, this does not modify the terminal inferosuperior activation of the LA that explains the typical morphology ± in II, III, and VF. In fact, in dogs, the same ± morphology appears after cutting the Bachmann’s bundle at the right and left sides of the septum5(see Figure 3).

Bayés de Luna et al13 defined the ECG-VCG criteria and demonstrated that this type of block is a very specific (90 %) but insensitive marker of LAE. The duration of P wave is 120 milliseconds or more (120–170 milliseconds in this sample of 83 cases). However, it is the morphology of the P wave (± in inferior leads) that pinpoints that there is a retrograde activation of the LA. The positive mode of P waves in leads II, III, and VF is at times not well-observed, probably because of fibrosis, and the diagnosis of junctional rhythm due to an apparently negative P wave in II, III, and VF may be made. It was demonstrated that this type of block is very frequently accompanied by paroxysmal atrial arrhythmia, especially atypical atrial flutter in patients with valvular heart diseases and cardiomyopathies. As a result, this association is considered an ECG clinical syndrome10,14. 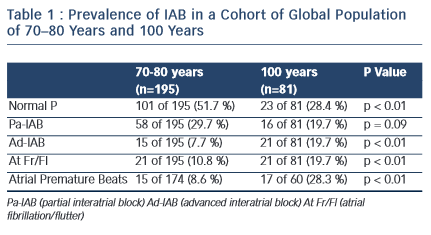 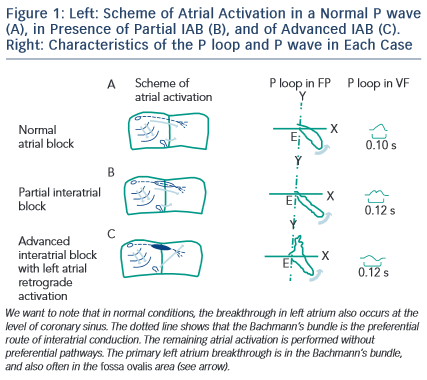 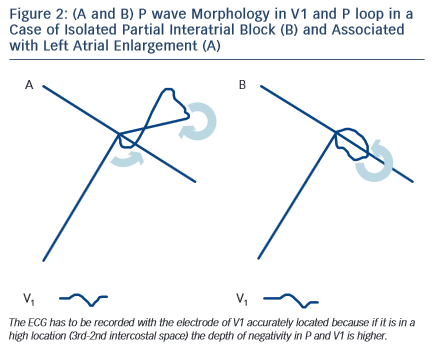 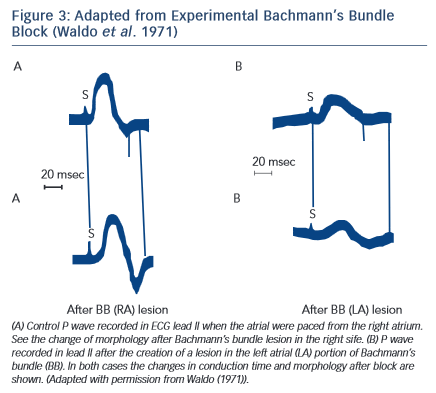 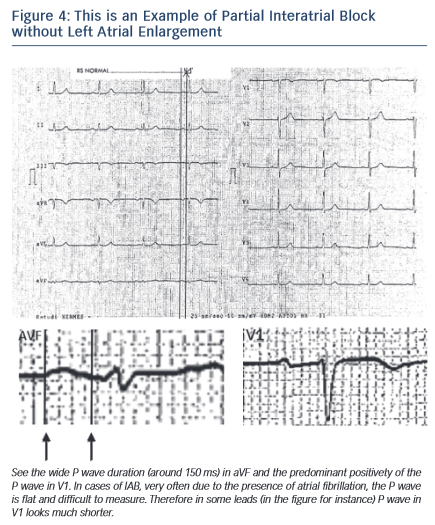 During long-term follow-up, especially in patients with mitral valve disease or cardiomyopathy, the successive appearance of first-degree and later third-degree interatrial block may be seen (see Figure 9).

In an in-hospital population, Spodick, using as a criterion of IAB the presence of P wave ≥100 ms, identified the prevalence of IAB (most likely partial IAB) in 47 % of the screened population (1,000 patients), being highly prevalent in the subgroup above 60 years of age15.

Recently, we have found in patients with heart failure a prevalence of A-IAB of 10 %9.

Identification of the Syndrome

Bayés de Luna et al10 reported on a single sample of patients with long-term follow-up to better characterise the incidence of atrial tachyarrhythmias in patients with advanced IAB (16 patients) and compared them with patients with partial IAB (22 patients) but similar echocardiographic parameters. The advanced IAB group presented a higher incidence of atrial flutter/fibrillation (15/16, 93.7 %) during a 30-month follow-up compared with the control group with partial IAB (6/22, 27.7 %) (p < 0,0001). At one year of follow-up, the incidence of arrhythmias was 80 % and 20 % respectively (see Figures 10 and 11).

Additionally, Holter monitoring showed that the prevalence of frequent premature atrial contractions (more than 60/h) was much more frequent in advanced (75 %) than in partial (25 %) IAB.

In 1998 Bayés de Luna, et al published a review paper in which they summarised all previous research published in this topic; suggesting that the association between advanced IAB and atrial tachyarrahythmias constitute a true syndrome14.

Since then, different groups have confirmed this association16–18 and a recent consensus on IAB has accepted the diagnostic criteria and clinical association of advanced IAB with atrial arrhythmias3. This association is now considered a unique syndrome that should be known as Bayes’ Syndrome19,21.

Should we Prevent Atrial Arrhythmias in Patients with IAB?

The strong relationship between advanced IAB and atrial flutter/ fibrillation led us to investigate the possible role of preventing atrial arrhythmias using antiarrhythmic drugs22. A small comparative trial of patients with advanced IAB received either an antiarrhythmic drug or a placebo. A significant reduction of AF recurrences was observed at follow-up in the group receiving prophylactic antiarrhythmic medication. Despite the small sample, this study should be considered pioneering by suggesting the treatment of patients early on when advanced IAB is detected, in order to reduce the incidence of atrial arrhythmias. This hypothesis needs to be confirmed with larger studies and samples.

We have not tested the possible benefits of antithrombotic therapy in this group of advanced IAB, as currently, the presence of documented AF is still needed, to start anticoagulation medication. However, as an interesting hypothesis, it could be reasonable to consider anticoagulation if the patient presents with advanced IAB and a CHA2DS2-vasc score 3 and the patient presents with advanced IAB. The evidence on the one hand shows that in patients with A-IAB there is an LA disfunction with important electromechanical changes23 and on the other that in many instances the AF is a risk factor but not the actual cause of stroke24 and it may be important to consider the possibility of treatment with antithrombotic therapy in patients with A-IAB and a CHA2DS2-vasc score 3, especially if they show atrial arrhythmias in Holter monitoring. This suggested hypothesis needs to be tested before making any convincing recommendations.

However, several studies with poor results have tried to resynchronise the atria with bi-atrial pacing. There is still no consensus whether this technique reduces the incidence of AF and this technique did not prove to be superior to sequential pacing3.

Research on this Topic

We would like to briefly review some of the important contributions different groups have published on this topic. Special attention should be paid to the group based in the USA and led by Dr Spodick who investigated several aspects of IAB and specifically its relation to stroke and to the electromechanical dysfunction of the left atrium associated with IAB24,25.

Platonov and Holmqvist studied the characteristics of the P wave morphology according to the manner of atrial activation and the relation of this pattern to atrial fibrillation28,29.

It is our intention to highlight the association of advanced IAB, which can be easily recognised in a surface 12-lead ECG, with atrial arrhythmias (specifically AF). Future investigations (some of them ongoing studies of our international collaboration group) should be considered: 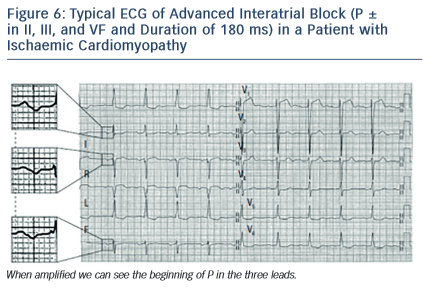 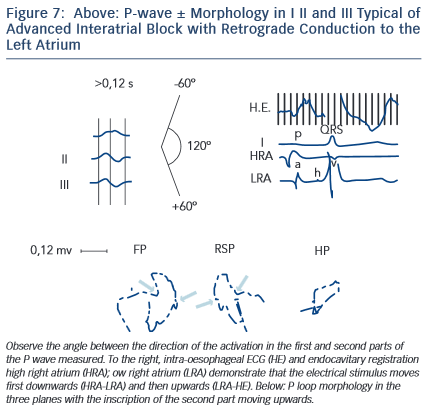 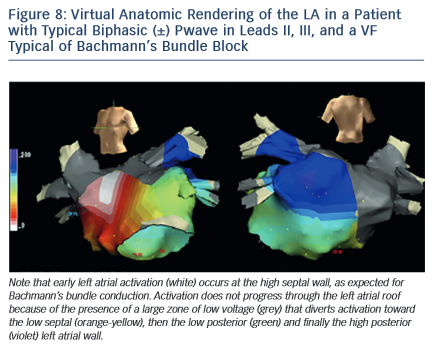 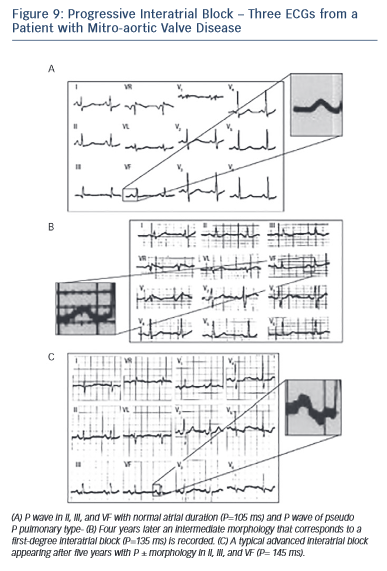 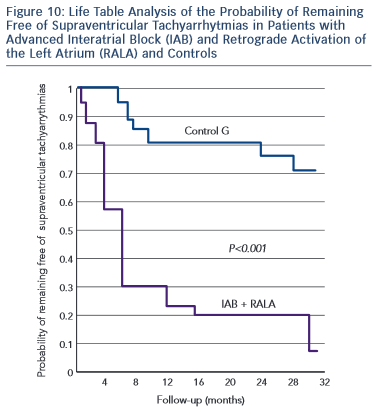 Interatrial blocks are a separate entity from atrial enlargement and may be of first (partial), second degree (intermittent) or third degree (advanced). This ECG pattern may be transient, it may present simultaneously without left atrial enlargement (or not), and it may be reproduced experimentally. Advanced interatrial block presents a clear ECG pattern (P ≥120 ms with a ± morphology in leads II, III and VF).

Further studies will help in characterising the syndrome in different clinical scenarios.